Cowboys Commit “Comedy of Errors” in 19-3 loss to Buccaneers 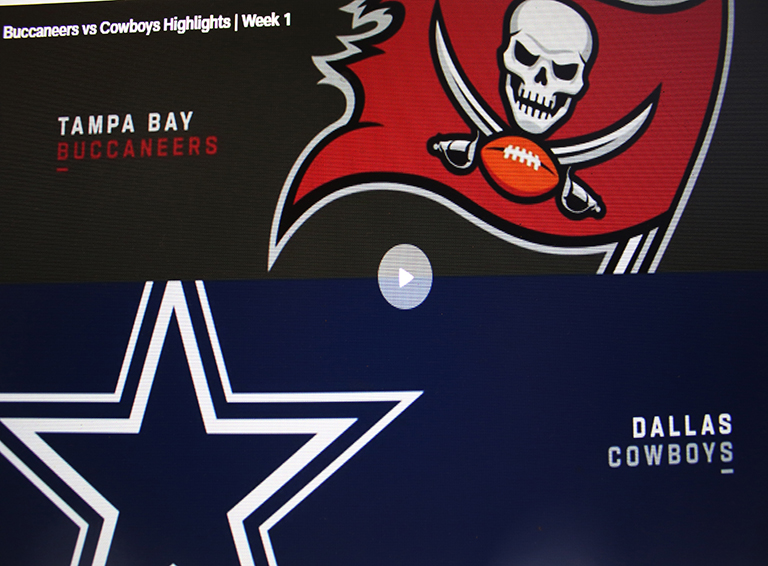 ARLINGTON – The Comedy of Errors is one of William Shakespeare's greatest literary plays. This farcical comedy incorporates a major portion of humor with a case of mistaken identity.

After NBC broadcast its Sunday Night Football game between the Dallas Cowboys vs the Tampa Bay Buccaneers, Mr. Jerry Jones, owner and GM of the Dallas Cowboys, his head coach, and his team took a page right out of Shakespeare’s, “classic 15th century work. Furthermore, the definition of comedy of errors, also an event or series of events made ridiculous by the number of errors that were made throughout, perfectly describes this 21st century NFL football team known as “America’s team.”

That is precisely what happened as the ‘Boys got the brakes beaten off of them by the GOAT (greatest of all time) Tom Brady and his Tampa Bay Buccaneers, 19-3 in Sunday Night Football’s season opener for both teams.
I will make this crystal clear and emphatic statement. The Dallas Cowboys’ owner/GM, head coach, Mike McCarthy, and this year’s 2022 football team are “flat-out” dysfunctional and have been since 2019. See my Op-Ed commentary that proves my point. https://flacoguapo.com/index.php/columns/202-cowboys-2019-super-bowl-aspirations-implode-due-to-three-owner-coach-players

Let me present my case before the court of public opinion, particularly to those diehard Poke fans who are being sold a bill of goods by the ‘Boys” “1+1 is 3” (what the fridge?) GM.

This year’s 2022 edition of “How about them Cowboys” team, particularly its quarterback Dak “Took a step back” Prescott’s quarterback play was “highly offensive”.  When it comes to showdown games, he has not shown up. For the Bucs’ game, Prescott was 14-29, for 134 passing yards, and one interception. This from a quarterback who was drafted in the fourth round of the 2016 NFL Draft. Once he had measurable success from his rookie season to the first three games of the 2019 season, Jerry “1 t 1 is 3,” Jones paid Prescott 4th round draft pick money as in a $160 million dollar contract.

Yet, Jones isn’t getting a return on his investment from someone paid a “king’s ransom” like he was the fourth pick which he clearly wasn’t. Because if he were the fourth pick, Prescott should have been able to beat last season’s teams which made the playoffs: the Buccaneers, Denver Bronchos, Kansas City Chiefs, Las Vegas Raiders, and the Arizona Cardinals.

Going into Sunday night’s game, Prescott and the “Boys” had a second opportunity to beat the GOAT, and the Bucs. Granted Dak was playing the Bucs’ defense with one hand tied behind his back. Jones did that when last year’s key starters on offense e.g.  Amari Cooper, La’el Collins, and Cedric Wilson were either traded or let go in free agency, therefore scoring points in the rematch was going to be difficult.

Then late in the fourth quarter, Prescott’s finger on his right hand was broken by Bucs’ linebacker, Shaq Barrett. You see where I am headed with this? Wait. . . for. . . it. . . Jones pointing fingers at his coaches and his team, ironically resulted in Prescott’s finger being broken (yes, I realize Jerry said this about the coaches and team after the fact). But don’t you Cowboy fans see the connection—pointing fingers by a GM, then his quarterback gets his finger broken!

As for the third player or rather coach in this Dallas drama, it is Mike “drop the mic” McCarthy. The Dallas offensive line committed a total of 10 penalties in the season opener. It has been stated by NFL former players, a coach is either allowing it to happen, or coaching it. With no consequences for players to face for continued penalties, McCarthy is allowing it.

Finally, the third player(s) in this football act is Cee Dee Lamb whom ownership anointed to be the No. 1 receiver. If you follow the ‘Boys closely, Lamb is not ready to be the go-to-guy because last year he dropped eight passes. And, in the 19-3 loss to the Bucs, he dropped two. The Prescott-to-Lamb connection was only able to come up twice for 29 yards.

Other offensive players to blame for a disgusting performance were: right tackle, Terrance Steele who egregiously committed three consecutive penalties late in the fourth quarter. And, Dallas’ third-round draft choice, Jalen “I’m here to change the culture” Tolbert. Tolbert was supposed to take up the slack for Cooper’s departure. Tolbert stated in training camp early that he was going to help “change the culture.”  Well Jalen you can’t change the culture when you are on the practice squad!

There’s enough finger pointing to go around for an embarrassing, 16-point loss by the Cowboys. The phrase “The buck stops here,” starts with Jones, McCarthy, Prescott, and the team. All actors in this “Comedy of Errors” play, or rather football game were guilty of masquerading as an NFL organization, head coach and an NFL “professional” football team.