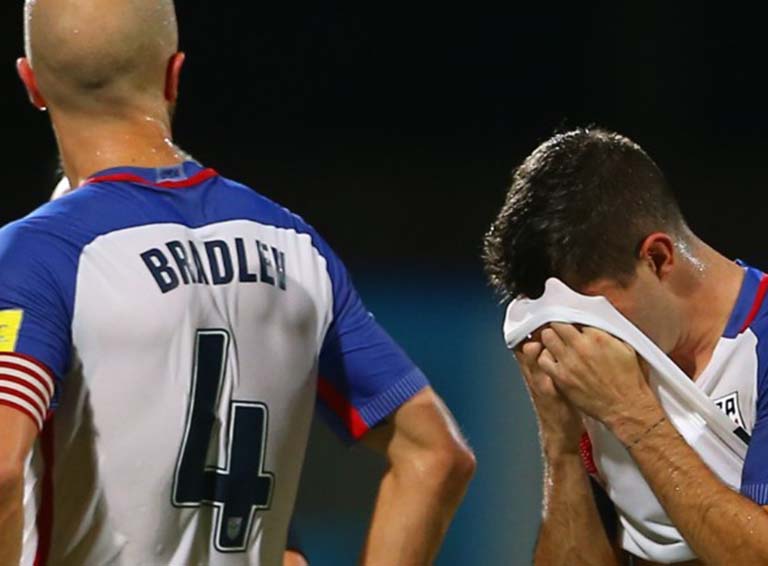 For the first time since 1986, the US Men's National Team will be watching the World Cup from home.

Despite a fightback, which included a goal straight after the half-time break from 19-year-old Christian Pulisic, American hearts were to be broken, with the defeat plunging the Americans into fifth place in the CONCACAF table.

"That was my job. To get the team qualified for the World Cup ... This game in my view was perfectly positioned for the US team and we failed on the day," Arena continued. "We have no excuses. We failed today.
We should have walked off this field with at least a point."

The final round of qualifiers in CONCACAF also saw Panama put Costa Rica to the sword, and Honduras eke out a 3-2 win against table-topping Mexico.

The US result could not have been a bigger shock -- heading into the final game of qualifying, the Americans were safely within the automatic slots, with only a point needed to secure their tickets to Russia.

But the wins by Panama and Honduras, coupled with their unexpected loss to the last-placed CONCACAF team in Couva, dropped the US team to fifth.

The Panamanians' 2-1 victory saw them in third place and guaranteed them a debut World Cup appearance in Russia next year, alongside fellow regional qualifiers Costa Rica, who finished second, and Mexico, who topped the table.

Relief
Elsewhere, a hat-trick from Lionel Messi propelled Argentina -- which had endured a poor run of results, putting qualification in doubt -- into third in the South American qualifying table and an automatic spot.

Brazil, the first team to qualify for the tournament, Uruguay and Colombia rounded out the CONMEBOL -- the South American confederation -- automatic spots.

In another upset, World Cup regulars Chile -- the Copa America holders -- suffered a 3-0 defeat at the hands of Brazil, losing out on goal difference to fifth-place Peru, who now face a playoff round against Oceania winners New Zealand.

Portugal leapfrogged Switzerland to claim one of the final automatic slots for European qualifying, with Johan Djourou putting the ball in his own net to hand the lead to the reigning European champions, which finished off the contest with a 57-minute Andre Silva strike.

The remaining European playoff spots were also determined -- group runners up Sweden, Greece and Switzerland joining Italy, Denmark, Croatia, Northern Ireland and the Republic of Ireland in the next round of qualifying.

Slovakia missed out on a playoff berth as the lowest-ranked runner-up.

In Asia, Australia's veteran Tim Cahill scored twice -- his 49th and 50th international goals -- to seal a 2-1 victory for the Socceroos and end Syria's dreams of a first-ever World Cup. Australia now face Honduras in an intercontinental play-off.

A total of 23 teams have now qualified for the quadrennial 32-team international tournament, which kicks off in Moscow's Luzhniki Stadium next summer.

Africa's qualifying is yet to be finalized, as have the results of the European and inter-confederation playoffs, which will take place in November.