Rams come from behind against the Wolves to win, 24-17 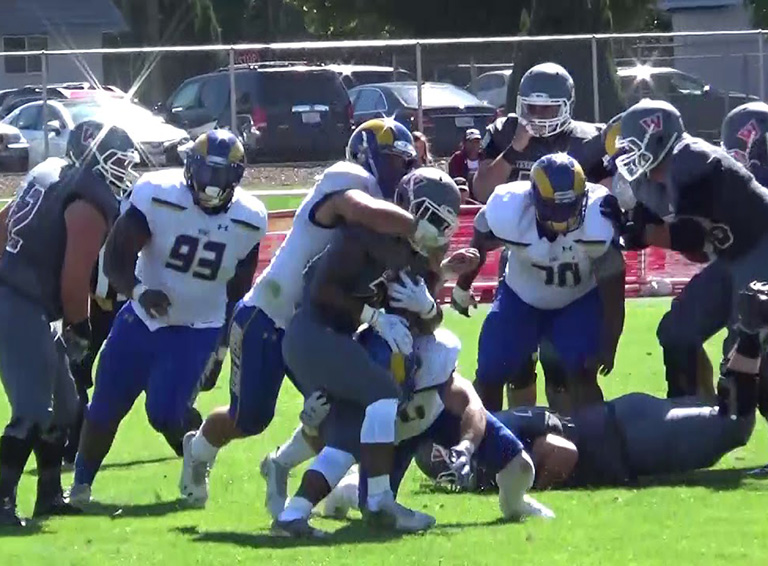 MONMOUTH, Oregon – The Angelo State football team started off the 2018 season with a dramatic win, taking the lead with 52 seconds left on a pass from Charlie Rotherham to wide receiver Lawson Ayo to secure a 24-17 win over Western Oregon on Saturday at McArthur Field. The ASU defense forced three turnovers and had five sacks, led by Hunter Kyle who had two interceptions and a two-sack performance from Markus Jones who now has 21.5 sacks in his career. Simon Maxey recorded the third turnover, an interception with 23 seconds remaining in the game to seal the win for the Rams.

The game-winning drive took less than a minute in a game that lasted more than four hours after the Wolves took the lead with 1:46 left to play after a 74-yard pass set them up for a touchdown and a 17-16 lead over the Rams.

"I'm really proud of our kids," said ASU head coach Will Wagner, who improved to 7-1 in season openers leading the program. "Even after the long pass from Western Oregon, our guys were still positive on the sideline which was good to hear. Our offense struggled today, but they got in that rhythm on that last drive to move the ball down the field. We had guys step up and make plays when they had to and we are going back home at 1-0."

Rotherham completed back-to-back passes to Tashani Bibbs to start the game-winning drive before hitting Keke Chism for 11 yards, forcing a Western Oregon timeout. He then hit Ayo for a 16-yard touchdown.

"I knew that on that drive we were going to do what we needed to do," Rotherham said. "I felt confident and trusted everyone on that field. Our defense had been playing a great game and it was our turn to do our part and finish it off."

Angelo State returns to action next Saturday, September 8 on the road against Abilene Christian before hosting Texas A&M-Kingsville on Saturday, Sept. 15 in its home and Lone Star Conference openers at LeGrand Stadium at 1st Community Credit Union Field. The Wildcats are coming off a 55-27 loss at Baylor on Saturday and will be playing ASU for the first time since 2012 when the Rams earned a 28-23 win over ACU in San Angelo.

Check out these highlights that include touchdowns by Lawson Ayo, Tyrese Nathan and Keke Chism from Saturday's @ASURamFootball win at Western Oregon to open the season. The Rams are 1-0. https://www.youtube.com/watch?v=I7W--ThF-YE