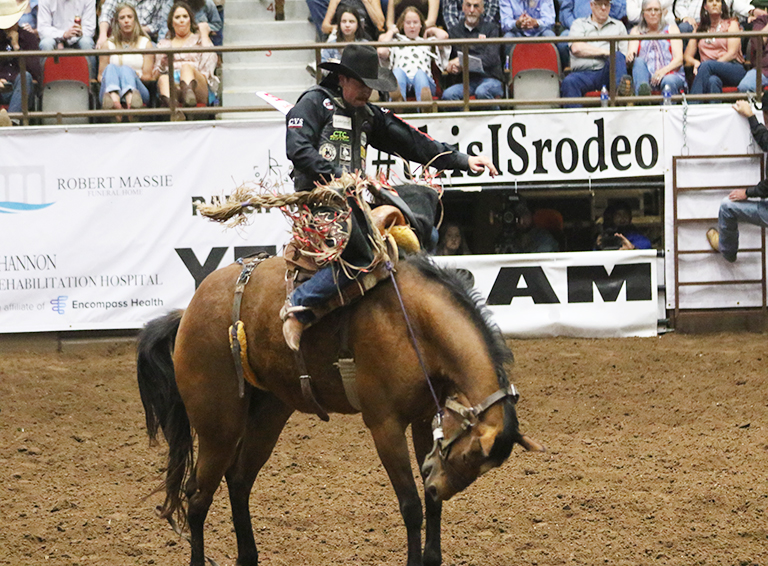 The most competitive event in the chute-out was tie-down roping, which featured three world champions: Shane Hanchey (2013), Haven Meged (2019), and Shad Mayfield (2020). In the end, though, Hanchey barely won with a time of 6.8 seconds over Mayfield’s clocked time of 6.9.

Reigning world champions Kaleb Driggers and Junior Nogueira pulled off a similar feat in team roping with a 4.3 time to claim the $7,500 first-place prize money.
In the steering wrestling competition, Tyler Waguespack, the three-time and reigning world champion steer wrestler, stopped the clock in 3.7 seconds to claim that title.

Bull rider from Utah, Josh Frost, fresh off his National Finals Rodeo aggregate title in December, rode Carr’s Curley Bill for about two seconds, earning an 87.5-point ride. The other two bull riders, Earnie Courson Jr. and Ky Hamilton did not stay on their bulls for the qualifying eight seconds, thus Frost walked away with the title.

In the women’s barrel racing which was an invitational, just four cowgirls were in the final mix. Reigning world champion Jordon Briggs posted a 14.19-second run to win the title.

Of the eight winners of Saturday’s Cinch Chute-Out, five owned world championships. Driggers, Nogueira, Waguespack, and Briggs all claimed gold buckles in 2021; it was Nogueira’s second (he won the 2016 all-around title) and Waguespack’s third.

Below are the official results for all seven crowned champions in their respective fields.