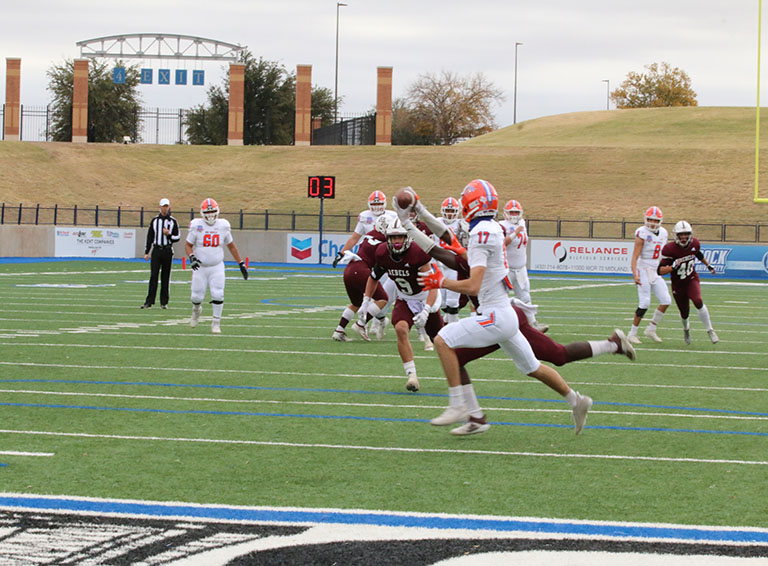 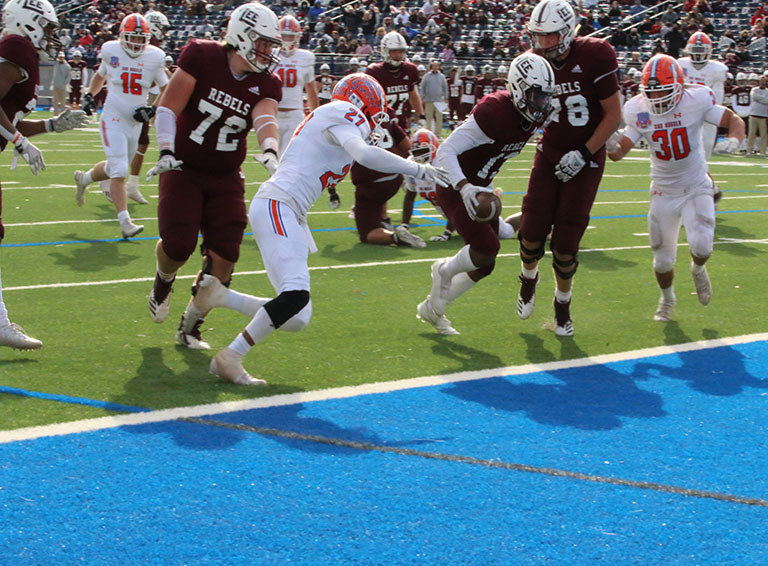 Midland Lee Rebels’ halfback, Shemar Davis torched the Central High Bobcats’ defense for three touchdowns.
In a district 2-6A showdown for a share of the title, Davis’ Rebels ran wild on the Cats’ “Angry Orange” defense for unofficially 300 plus rushing yards in a 56-35 route over Central High.

MIDLAND – The phrase “behind the eight ball” means “a difficult position from which it is unlikely one can escape.” In Friday’s 2 p.m. District 2-6A showdown between the Bobcats vs Rebels is exactly where the team found itself.  At stake in the season finale game, played at Grande Communications Stadium, was a share of the 2-6A title. Midland Lee) (8-1 overall and 5-1 in district) ran wild on Central High (4-5 on the season and 4-2 in district) for a 56-35 victory to share that title with the Odessa Permian Panthers.

Central was put in a difficult position early when Midland Lee scored first. The Rebels answered every time the Cats’ scored with one of their own. Midland Lee’s dynamic duo of quarterback, Mikey Serrano and running back, Shemar Davis, either ran the ball through the tackles or outran the “Angry Orange’s” defense.

From the first offensive series, the Rebels’ Serrano jumpstarted his offense with a 27-yard touchdown run. Just like that, the Rebels led, 7-0 with 9:40 left in the first quarter.

The Bobcats’ offense must have had a hangover experience from last week’s Permian Panthers fiasco. Because Cat’s quarterback, Malachi Brown, and his offense came up empty on three drives. On the first opening series, Central went three-and-out. Next time up, Brown had the offense within scoring range when he fumbled the ball inside the 10-yard line. Although the Cats’ defense was outflanked and outmanned (injuries on the defensive line and secondary), the “Angry Orange” gave no ground and forced Lee to punt. 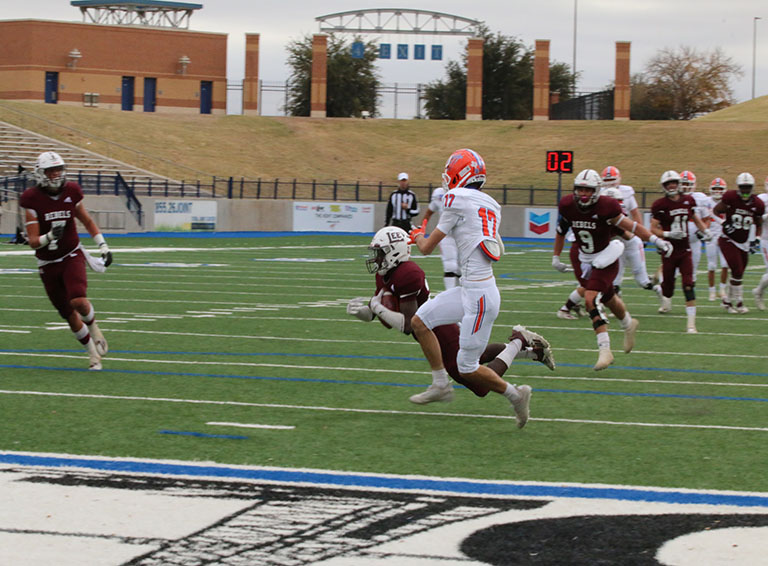 Rebels’ punter, Gunner Meade, got off a horrible kick that didn’t travel far which gave the CHS offense a great opportunity to score from close range. Facing a first-and-10 at Lee’s 25-yard line, Brown threw a pass to wideout, Weston Hill on a slant route. Unfortunately, Rebels’ cornerback, Canyon Moses stepped in front of Hill for an interception to take away a chance at any points.

Central’s fumble and an interception in the early going of the first half really put the offense “behind that eight ball” to some degree as points were left off the scoreboard. The Cats were able to tie the game at 7-7 when back, Samuel Navarrette, scored from a yard out with about 30 seconds left in the first quarter. It looked like Central was going to settle down when Brown led the team to a one-yard touchdown to make it CHS 14, Midland Lee 7.

However, the Rebels quickly responded with a scoring drive of its own. The Serrano-to-Davis connection clicked for a 36-yard touchdown to tie the game 14-14 with 5:29 left in the second quarter. Midland Lee struck again when Davis caught a five-yard touchdown pass from Serrano to make it Rebels 21, Cats 14 which turned out to be the half-time score.

In the third quarter, Central knotted the game 21 all as Brown went in from a yard out. From then on, the Bobcats really got “behind the eight ball” when the Rebels ran the table. After the game was tied, Midland Lee pocketed the game with 21 unanswered points. The score that broke the game open and the back of Central was when Davis scampered for 64 yards from the line of scrimmage on first down. That jawbreaker run made it 28-21, Lee.

After the Cats punted on their series, the Rebels came right back on a time-consuming nine-play, 94-yard drive that wore out the “Sic em” Cats defense. Lee was now ahead, 35-21.

The Rebels’ third consecutive score came from its stout defense. Cats’ Brown threw a pass that was intercepted by a linebacker, Elijah Nuñez who went the distance for 47 yards. Lee now led 42-21 with 2:10 left in the third quarter.

Central finally answered with a touchdown to cut the lead 42-28 as Brown got his third touchdown of the game on a two-yarder. That score though came with only 9:44 left in the fourth quarter.
The second half scoring turned out to be in Lee’s favor with five touchdowns to Central’s three for that final 21-point difference, 56-35. 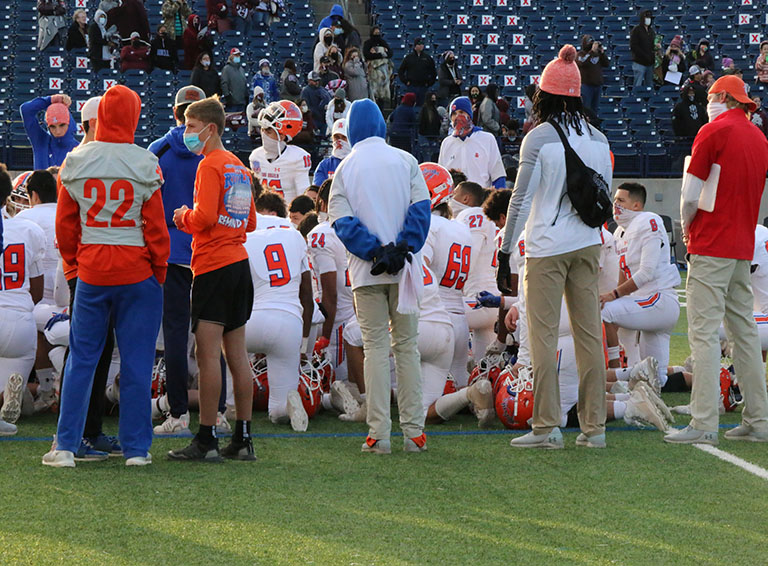 Central High gets two weeks off to prepare for the playoffs scheduled for December 11. But CHS doesn’t know as of yet which team it will face; nor where the bi-district game will be played.