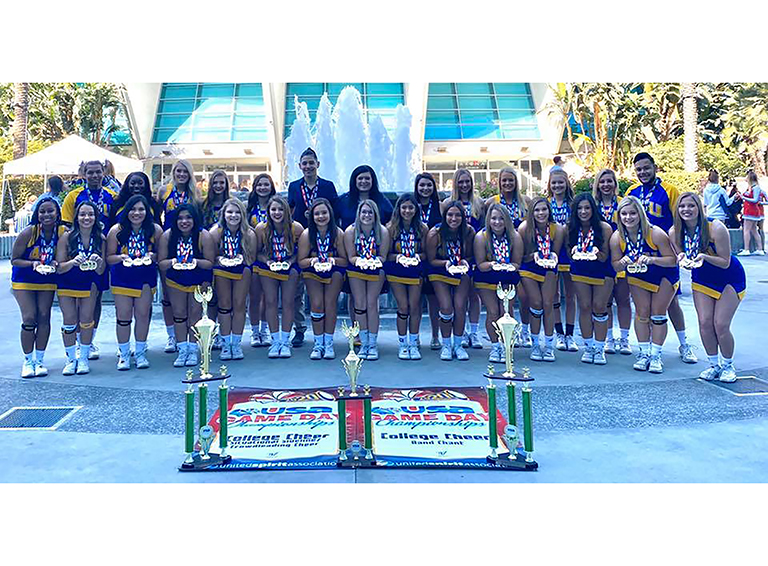 The championships were held Feb. 15-16 and featured teams from dozens of colleges and universities throughout the U.S. competing in a variety of divisions and categories, including Game Day, Show Cheer, Jazz, Hip-Hop, Pom-Pom and Mascot.

"This season was a difficult one for our team, both physically and emotionally" said Coach Kaylee King. "Every year we say we overcame adversities but this year it really was true."

The ASU Cheer Team which won national championships in the Show Cheer division in 2018 and 2019, were led by Coach King to those titles.

With a national title on the line, again, Kaylee and her grad student assistant, Lauren Ortiz' [ Medina, Texas] 25-member team never gave an inch or thought to giving in to fatigue, letting each other down; nor to the competition.

"When it counted the most. "They came together[at the] right time" Kaylee said. It’s such an awesome feeling as a coach to watch what they have worked so hard for play out just how you hoped." "I am so proud of them and all they were able to accomplish" concluded three-time National Cheer Coach, and champ, King.

As an alumni of ASU, I and the rest of the Ram fan nation and family, congratulate Coach King and her "king/ queen-of-the-hill" 2020 national champ Cheer team!