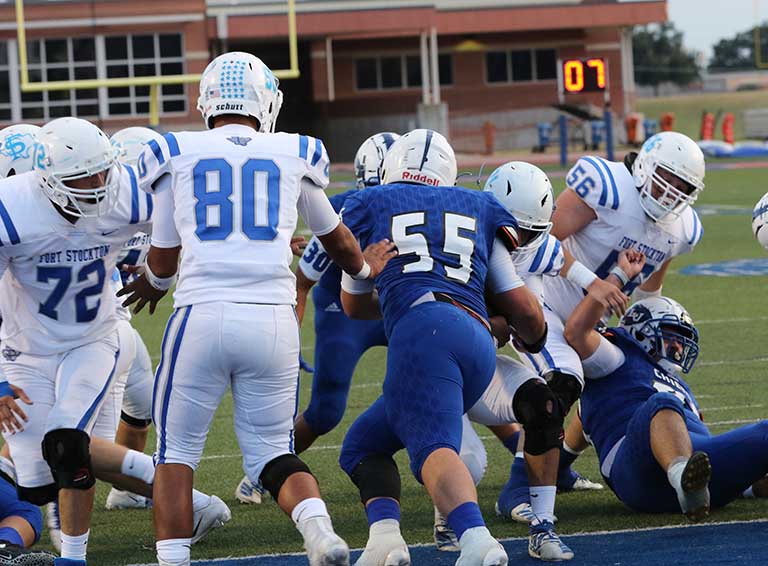 SAN ANGELO– William Shakespeare, English poet, playwright, is famously known for one of his short plays titled, The Comedy of Errors. So exactly what is the connection between Shakespeare’s play and Lake View Chiefs football? Comedy of Errors is a humorous play based on slapstick and mistaken identity. The Chiefs’ true-blue fan base saw a team commit flagrant, continuous errors which were neither humorous.
Worse, a community could not believe that Lake View had experienced a case of mistaken identity as the Fort Stockton Panthers humiliated the Chiefs in a 60-21 blowout win between two unbeaten teams entering Friday’s non-district played at San Angelo Stadium. 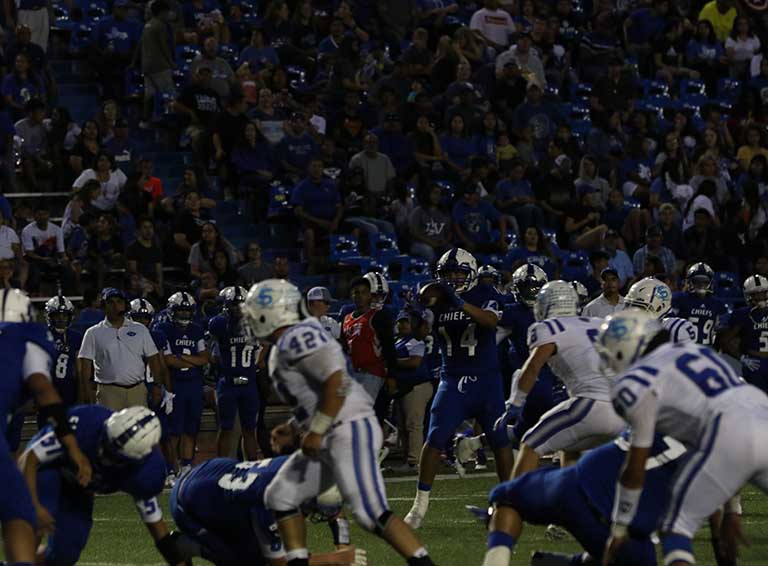 Other than the Chiefs winning the coin toss [Panthers deferred] to receive the kick-off, there were very, very few bright spots on a night when everything went south for a team that didn’t resemble one which had three consecutive wins since 1996. Lake View committed egregious errors from the get-go, ranging from unsportsmanlike conduct, three face-mask penalties, several interceptions; also the Chiefs’ special teams’ punter gets his punt, blocked, an offense whose quarterback, was under siege with four sacks, incomplete passes to finally negative yards rushing, the majority of damage done in the first half! 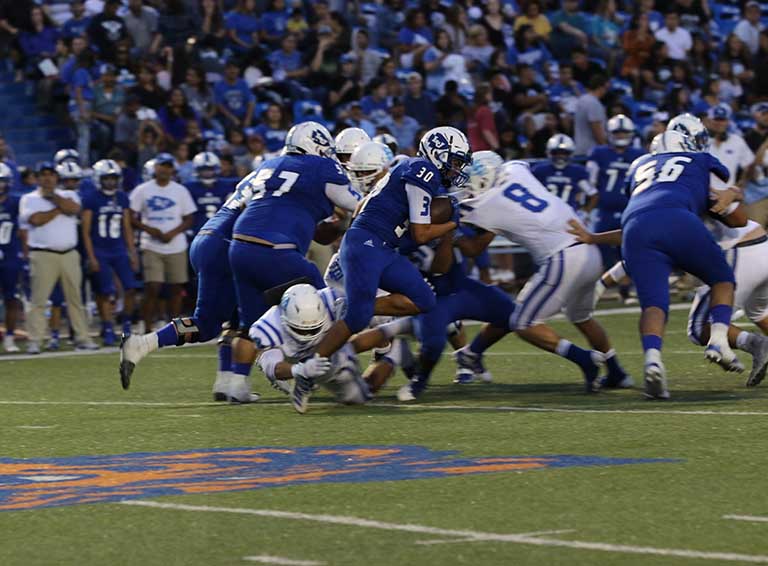 And, what was one of the hardest pills to swallow for a Chiefs squad that was clicking on all cylinders with regards to the Albert Rodriguez-to-Austin Bandy air raid? Rodriguez was off his game as he couldn’t hit the deep ball consistently. The Lake View’s high-octane passing offense was grounded by a stonewalled Panthers’ defensive front which also created negative 30 rushing yards by Chiefs’ backs. Where do you think Fort Stockton’s offense spent its time on whose side of the field? Yep, the Panthers didn’t have to go far to score as it started at Lake View’s 49. Then again at the Chiefs’ 32-yard line on another series. 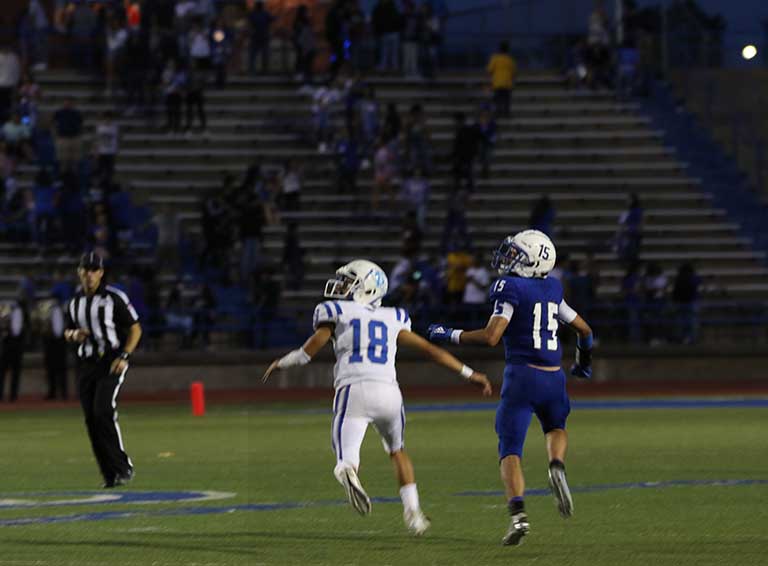 Fort Stockton led 13-0 after the first quarter. Lake View responded with one of their first few bright spots when Rodriguez threw a pass to wideout Johnny Espinosa, who got behind a Panthers defensive back, to turn a catch and run into an explosive 80-yard touchdown. After the PAT, it was Panthers 13, Chiefs 7 with 2:35 left just before the half. 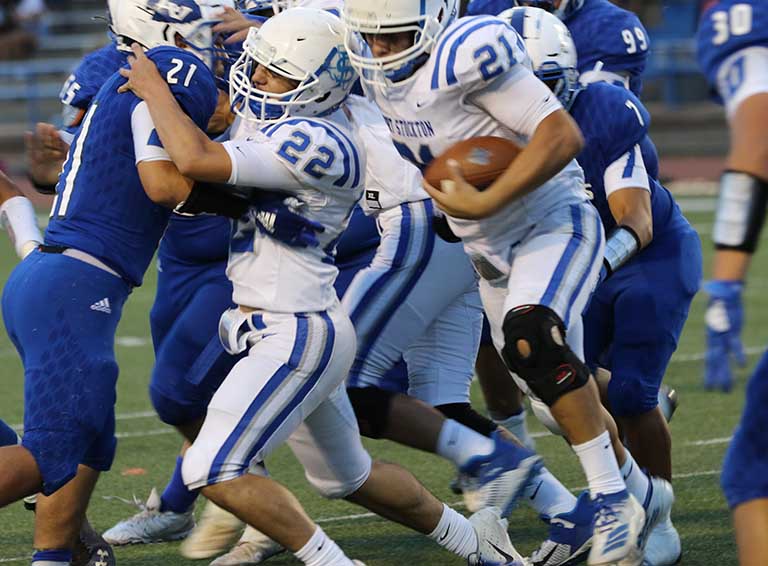 That bright spot, down by only six points turned dim rather quickly when Panthers’ quarterback, Dominic Aguilar, breaks the back of Lake View’s “Pride of the North side” defense with a 41-yard jaunt on their very next series to make it, 20-7. The score comes with 2:16 left in the second quarter which is what the halftime score turns out to be. 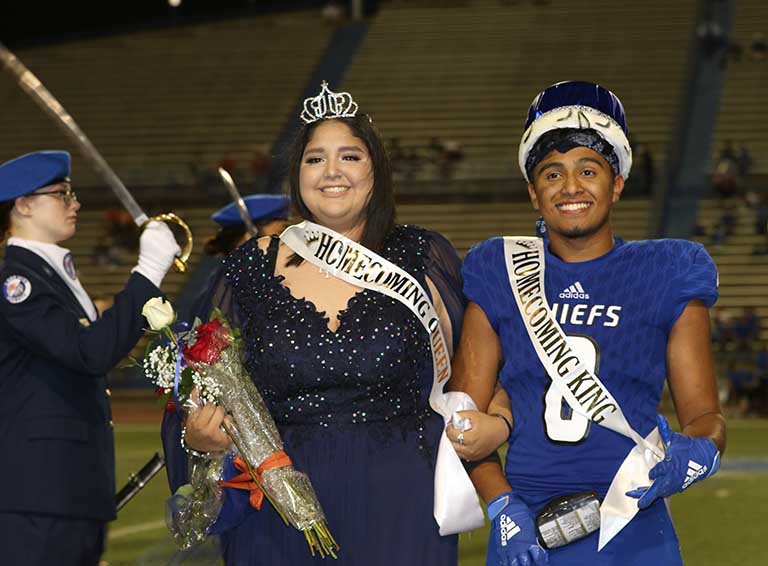 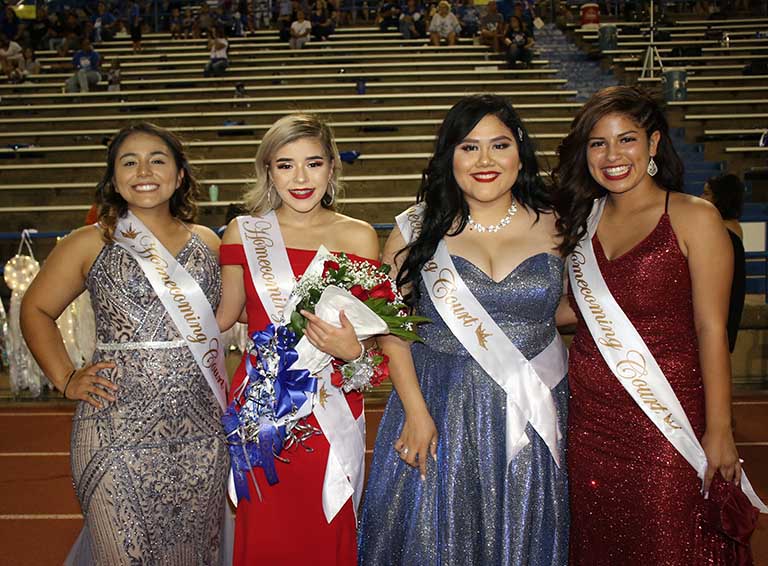 The Lake View High School duchesses nominees with their families, just before the announcement of the new 2019 queen.

Prior to the second half, Lake View High School turned its attention to this year’s duke and duchess nominees from which was crowned the 2019 King and Queen. The dukes in the running for the title were: Daylon Saenz, Matthew Chappa, Ethan Sanchez, Tony Martinez, Jose Avalos. As for the five lovely duchesses: Sierra Roman, Ariana Rangel, Jacqui Ortiz, Andrea Baeza, Seyanna Soto.

With the Chiefs’ defense holding off Panther scoring in the early going of the first quarter, its offense couldn’t sustain any offensive drives. It was just a matter a time before the dam broke. And when the dam burst, the floodgates drowned a Chiefs team at the start of the second half when Fort Stockton’s receiver, AJ Garcia, took the kick-off back for an 80 plus, touchdown return. It only took 15 seconds to score. Panthers led 26-7 at the 11:45 opening of the third quarter.

Lake View comes back with their own score on an Espinosa touchdown from 20-yards out to cut the lead, 26-14. After the third quarter ends with Panthers 46, Chiefs 14, Lake View is only able to muster one more score in the fourth quarter. Fort Stockton tacked on 17 points in the end to make it a 60-21, beat-down.

In fairness to the Chiefs team, although the game was close for much of the first half, what killed the Chiefs was shooting themselves in the foot continually as already mentioned. Lake View's offensive struggles to sustain any kind of drives in the first quarter gave Fort Stockton too many easy scoring opportunities.

With the win, Fort Stockton accomplished two goals. First go 4-0; the second mission accomplished was knock Lake View (3-1) from the ranks of the unbeaten.

The Chiefs become road warriors as the team faces the Llano Yellow Jackets next Friday, September 27. Kick-off from Llano Stadium is scheduled for 7:30 p.m. Llano (3-1) lost their Friday night game against Lago Vista, 42-28.