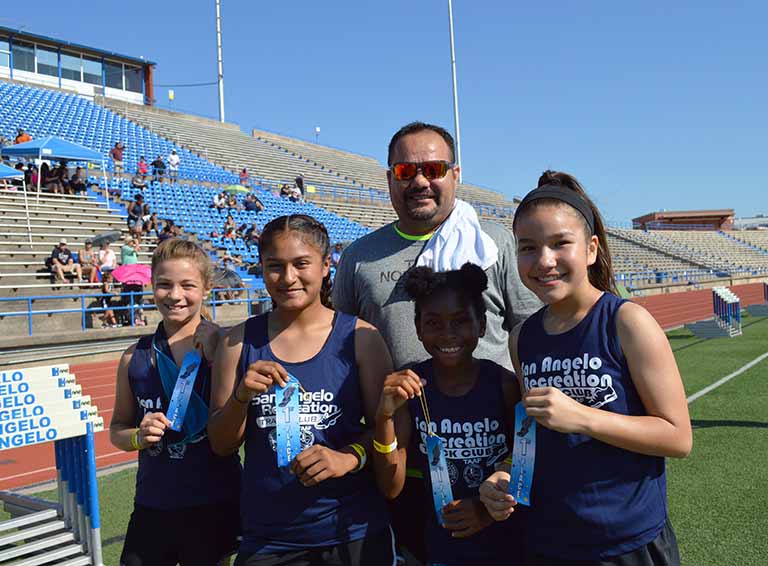 San Angelo — This weekend’s 20th annual San Angelo Circuit Meet, held Saturday, June 15, was different from the previous ones as proud fathers turned out pre-Father’s Day to see their children “push through” to bring home ribbons whether it was first place, second place, third place etc. in such events as the 100-meter dash, the 800-meter run, the shot-put competition, etc. 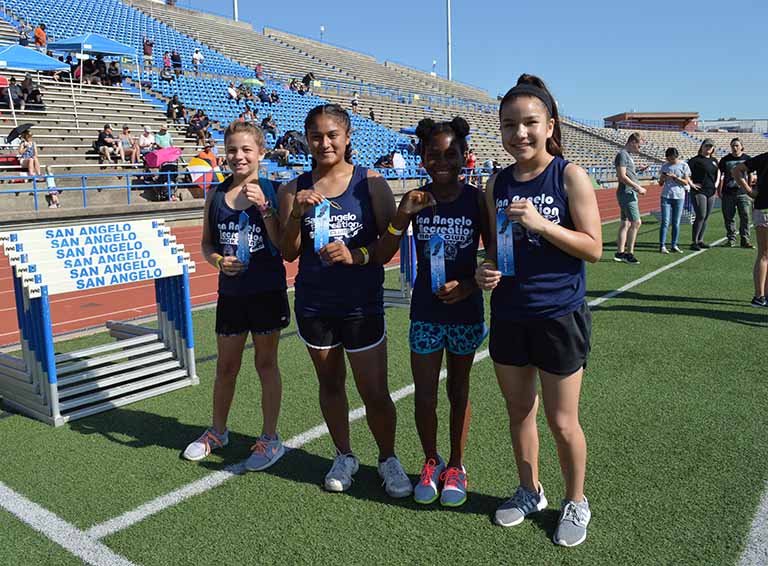 Among the fathers in attendance was Eric Moreno who saw his daughter, Saedye Moreno, anchor the 400-meter relay to bring home the first-place ribbon for the San Angelo Recreation Track Club. Eric stated that this was the first time together for the team, comprised of first leg, Mollie Bendele-Lugar, age 10 from Comstock. Second leg was 13-year-old, Savannah Rivas from TLC. The third leg person was Water Valley resident and nine-year-old, Janaye Costan followed by Saedye who brought home the gold, that is first-place ribbon. 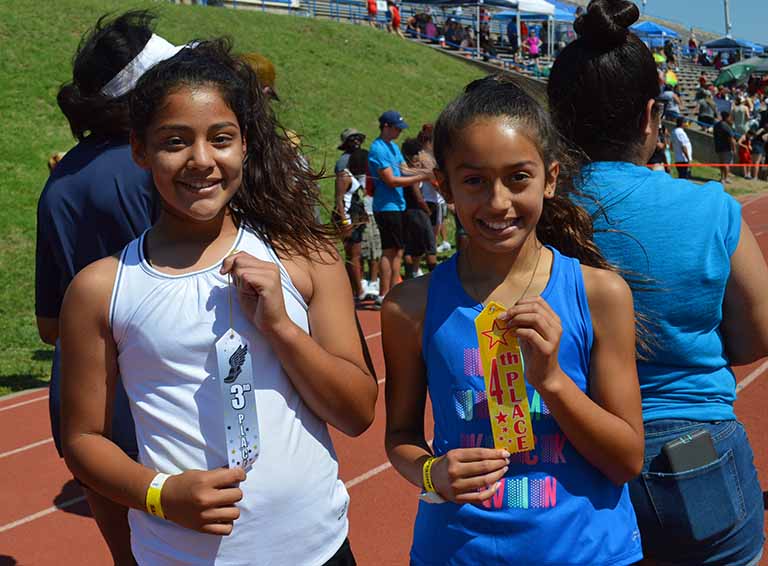 Peyton Jones, daughter of Erica Constancio, participated in the 100-meter dash where she placed third as she beat Lexi who took a fourth-place ribbon. Jones showed "true grit" as this was her first time to ever compete in the events she was entered in. 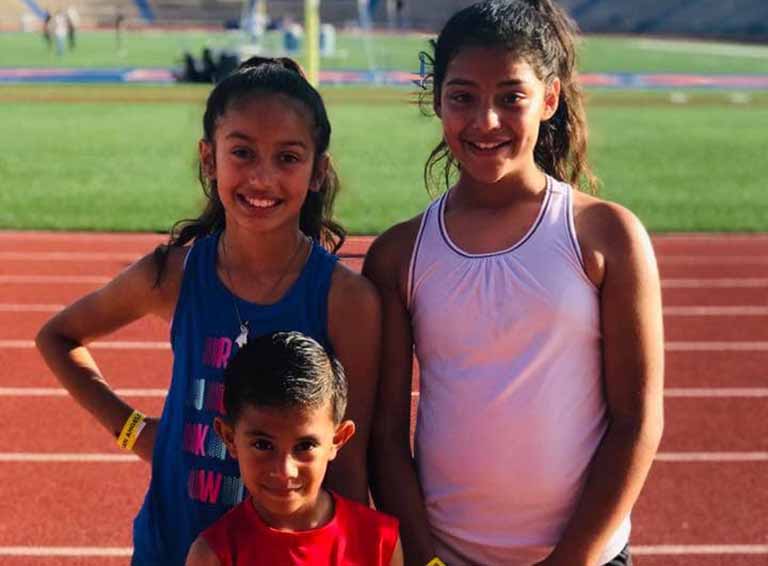 Another father, Jeremiah Samarripa brought his own #teamSamarripacompetitors: 10-year-old daughter, Lexi, Santa Rita kindergarten 1st-place, Jayce, and stepdaughter, Peyton. Jones came in 3rd-place in the 100-meter dash. She also got a 2nd place finish in the 400-meter run. 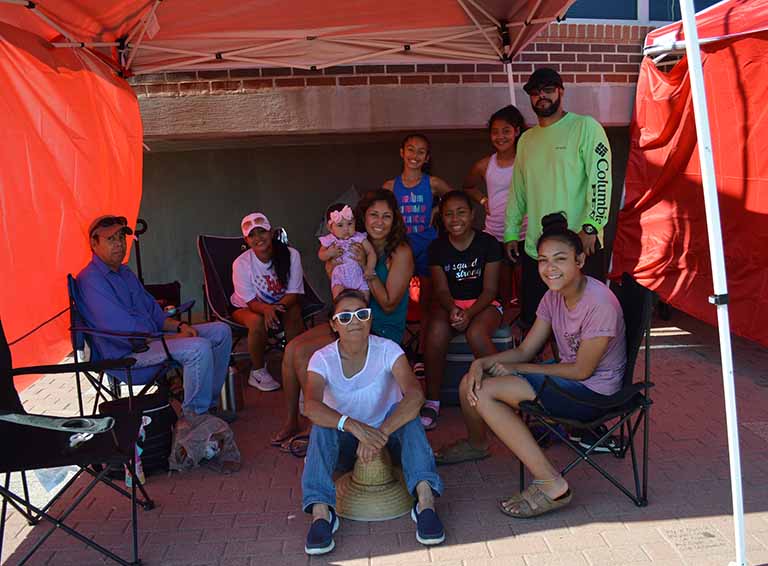 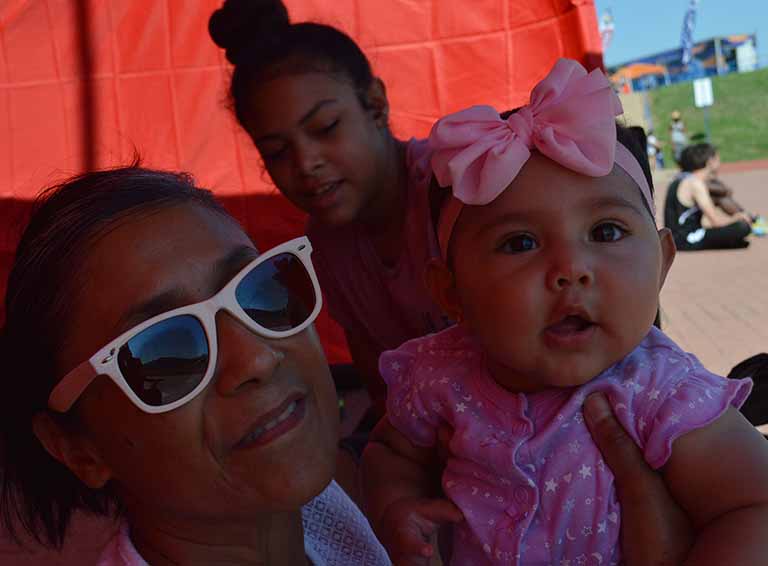 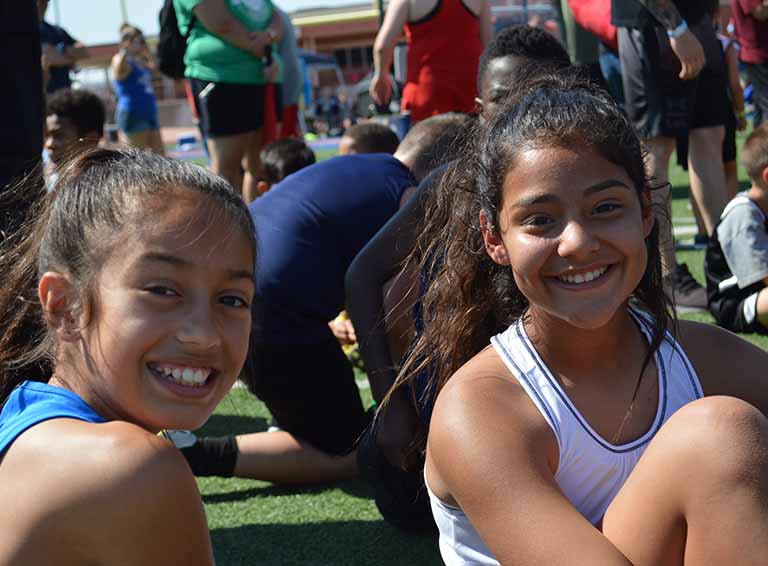 Left-to-right: Lexi Samarripa and relative, Petyon Jones competed against each. Peyton came in 3rd place while Lexi placed 4th in the 100-meter race. Then in the 400-meter run, Lexi came away with the 1st place ribbon, with Peyton the 2nd place winner. 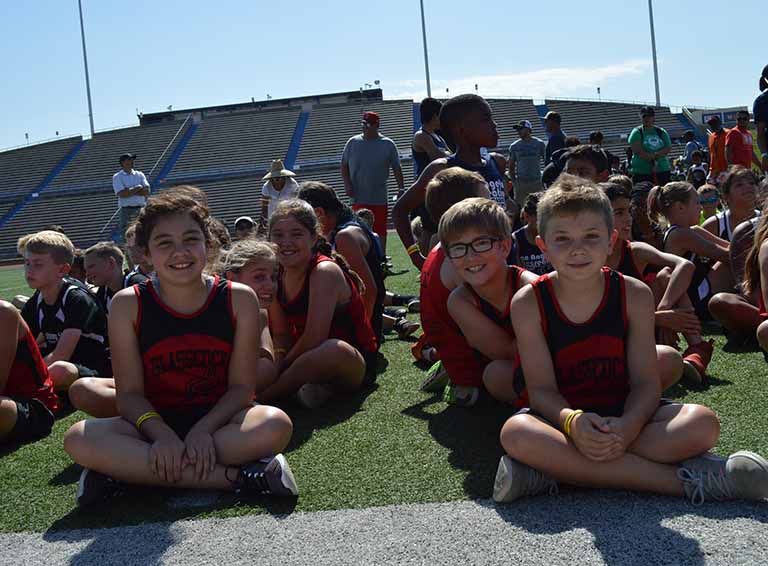 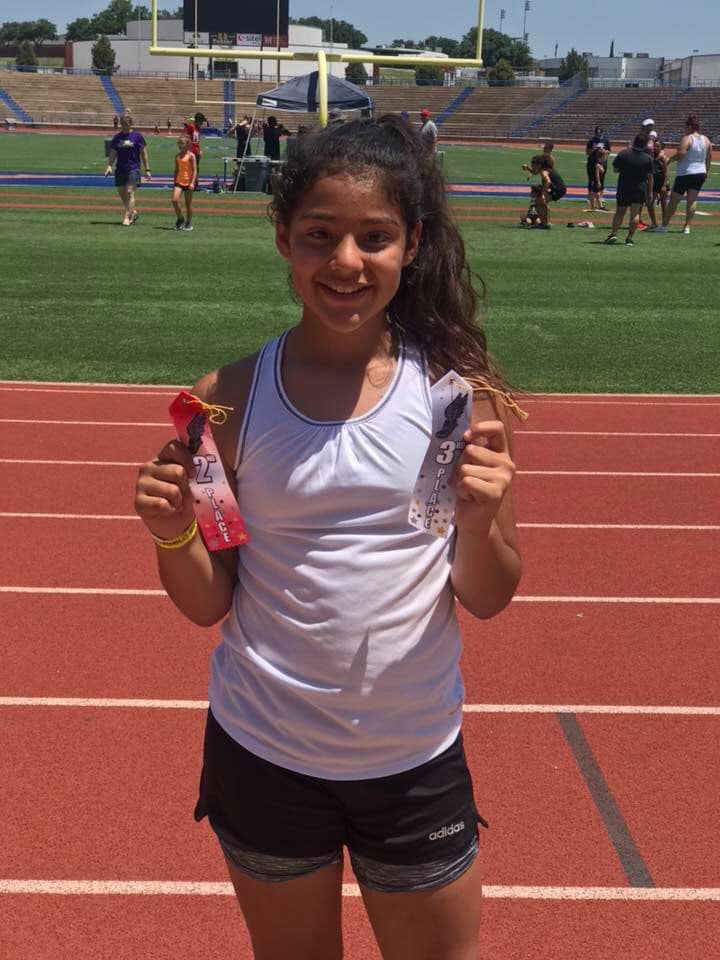 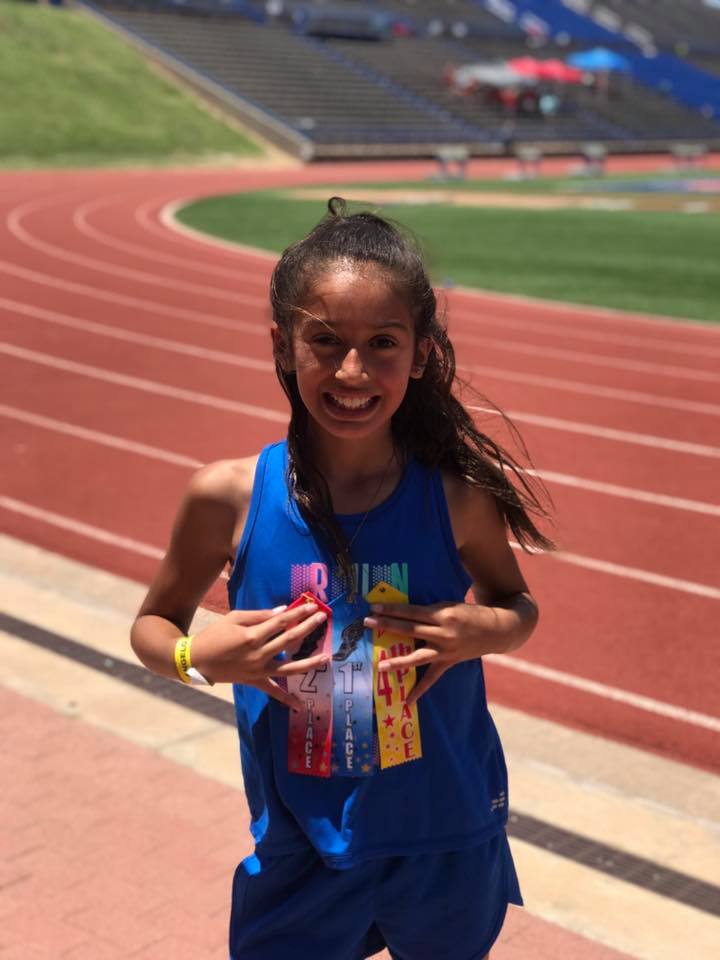 Peyton also brought home a 2nd-place ribbon in the 400-meter run as Lexi turned the tables on Peyton with a time of 1:20 for 1st-place. One other event saw Lexi complete in the 12-under girls’ long jump. 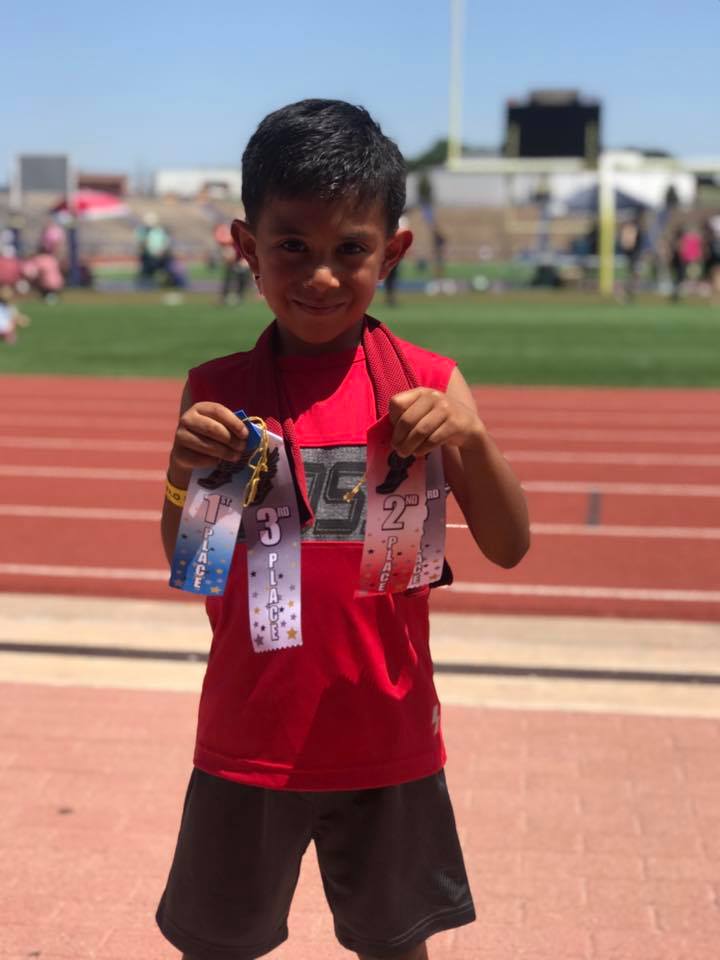 To view Jayce run for the 1st place ribbon on his 400-meter win, go to:

As for Jeremiah’s “little man” Jayce, he took home a 1st place ribbon in the 400-meter. Jayce, showed "big heart" as he turned on the jets from start to finish to lap his competitors. Jayce also got 2nd place and 3rd place in several other races. 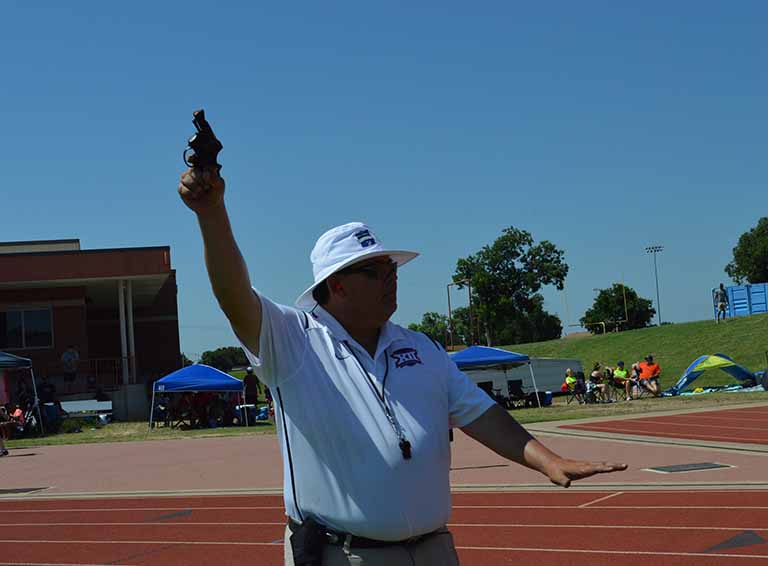 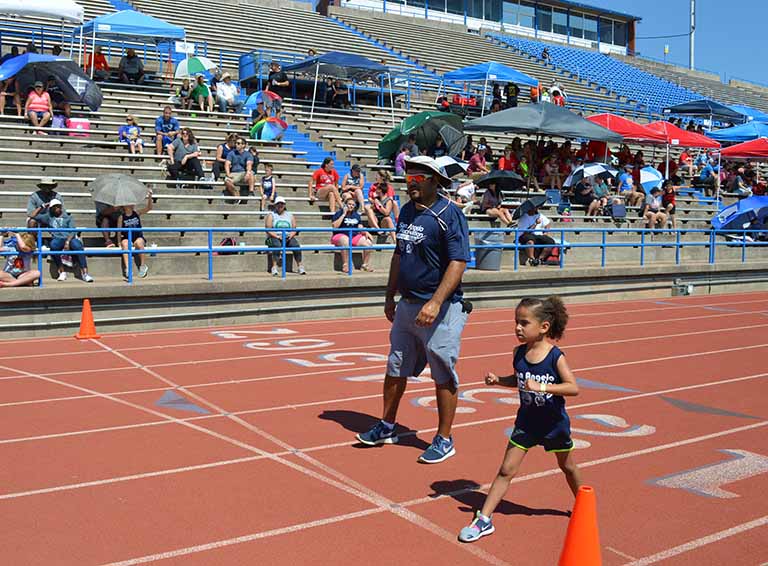 Flaco Guapo Media caught up with the SA Circuit Meet coordinator, John Henry Pérez, for a brief 30-second interview. Pérez, the San Angelo Recreation Supervisor, informed me that 10 volunteers from Goodfellow Air Force Base turned out to assist his 20 staff personnel to make this a successful summer sports event, held at San Angelo Stadium.