The two shall become one: Dupree-Samaripa Wedding 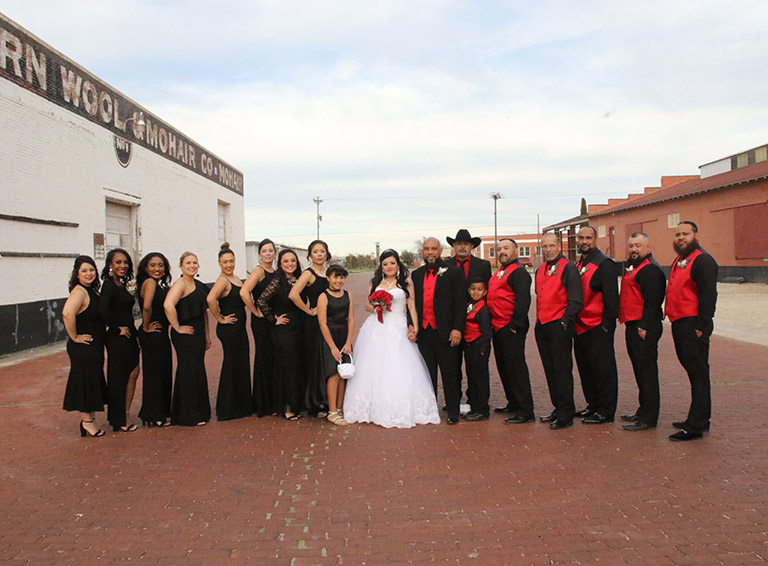 Flaco Guapo
SAN ANGELO – “And the rib, which the LORD God had taken from man, made he a woman, and brought her unto the man” (Genesis 2:22, KJV). In verse 22, when God took the woman (Eve) from the man’s (Adam’s) rib, the wife was meant to walk beside him. Not behind him, nor in front of him. 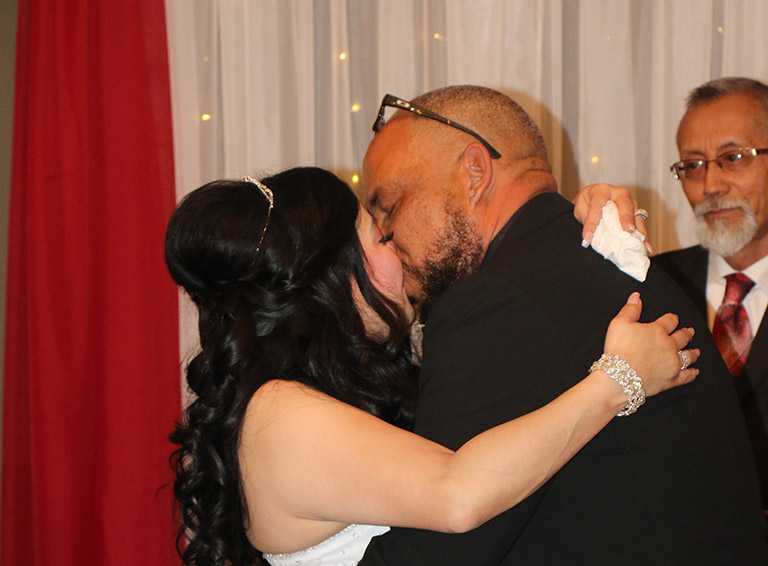 "John, you may kiss your bride, Ermelinda!" 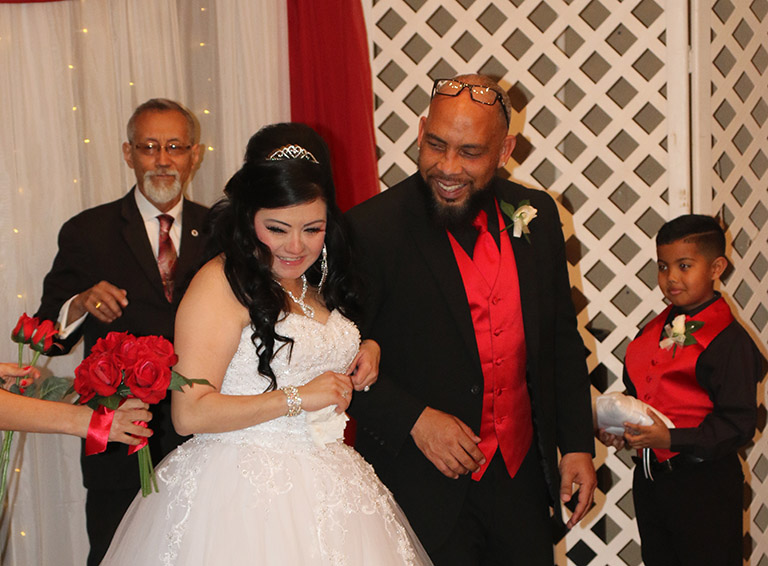 "Ladies and gentleman, I introduce to you, Mr. and Mrs. John and Ermelinda Dupree." 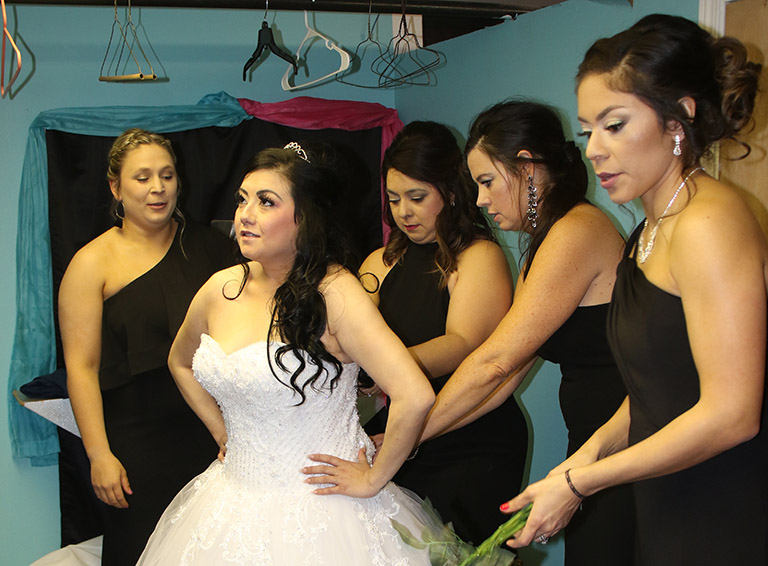 If we could just read what Ermy was thinking, it would probably go like this. "Twinkle, twinkle little star." No longer have to wonder who I are--I am Mrs. John Dupree and I say it with glee! 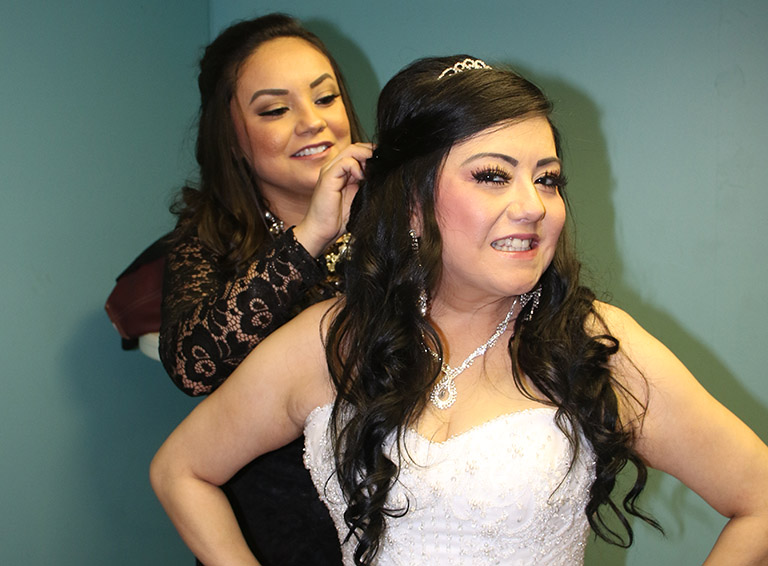 Over the weekend before the clock struck midnight, or on this particular Saturday, as Daylight Savings time came into play, the Cinderella, Hispanic version, Miss Ermelinda Samaripa, walked down the aisle to stand next [not behind him, but beside him as God outlined in Genesis 2:22] to her beau, best friend and husband-to-be, Mr. John Dupree. The Dupree-Samaripa connection became one big family as both sides of proud relatives were there to celebrate the Duprees’ big day together on Saturday, March 9, 2019. The 5 p.m. wedding and later reception were both held at Aurora’s Creations, 308 N. Chadbourne St. 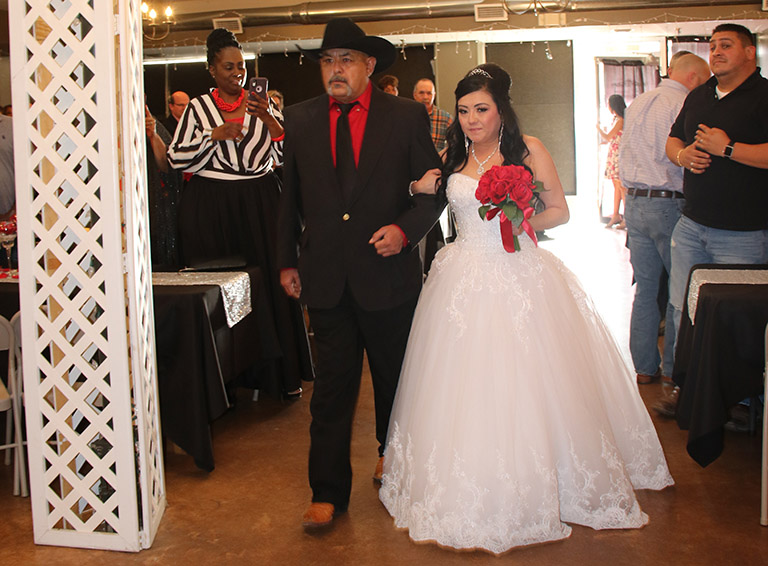 As the minister, I was asked and was honored to officiate my beautiful niece and John’s wedding. With Ermelinda's father, Tommy Samaripa, there to give away his daughter and later the Daddy-daughter dance, I wanted to pay a brief tribute to two very special women in my niece's life who could not be there on her blessed, wedding day. Grandmother, Ermelinda, passed away last July 2018. Both mother and grandmother would have been soo proud to see you their daughter and granddaughter married. For me, it was bittersweet as I remembered 30 years ago this past April when I was at my sister’s wedding looking in. Now on this beautiful, pre-spring like day to come, I was the one representing the Sanchez family, our beloved sister, Rose and Mom, Ermelinda. And so began my brief comments to begin the Dupree-Samaripa wedding vows. 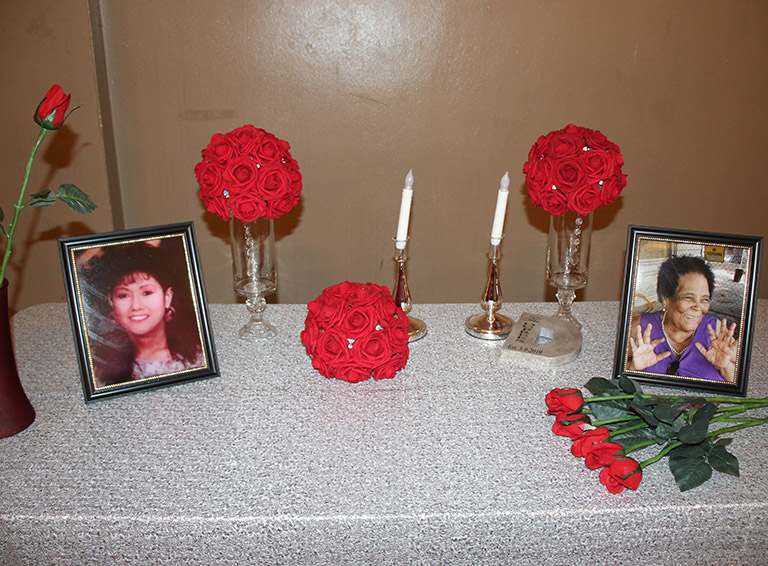 Both Ermelinda's mom, Rose Sanchez-Samaripa and John's mom, Dorothy Dupree were posthumously honored with their framed photos per Ermelinda's desire. Ermelinda was led to have a rose placed in a vase by each bridesmaid and groomsman as they departed as a tribute to those two precious women in their lives. 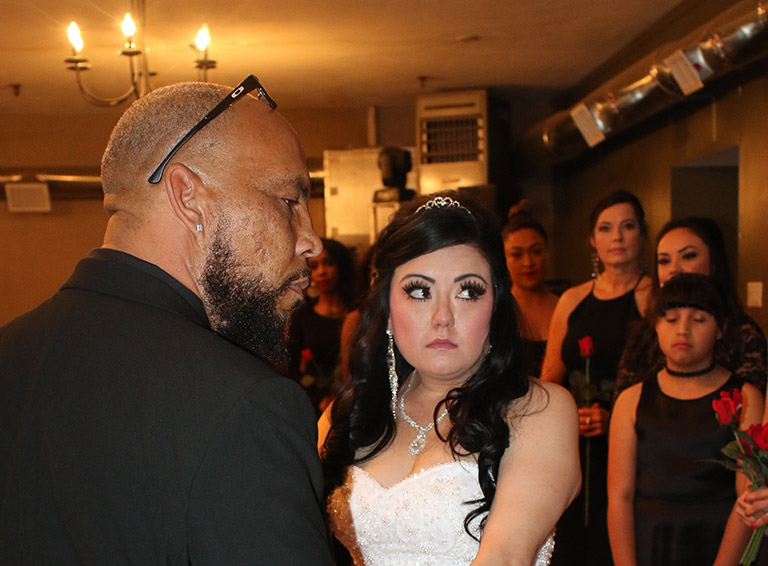 "Ermelinda my niece; it took you 54 steps to walk to this altar to marry today, on Saturday, March 9, your soulmate, John Dupree. Two special women in your life who came before you, took their own steps and vows to their future spouses years ago. The first one was your grandmother, Ermelinda, your namesake, who 66 years ago on May 25, 1953 wedded her husband, your grandfather, Jimmy Sanchez, Sr. Then 40 years ago in April 1979, your mom, Rose Sanchez became Mrs. Tommy Samaripa. And today, 30 years later, you have taken your own steps, 54 to be precise, to become in a few minutes the future, Mrs. John Dupree on this, your wedding day!

After the exchange of vows, John was asked to kiss his bride, Ermelinda; then I introduced them both to the attendees as Mr. and Mrs. John Dupree. The Duprees headed out the door to John’s requested, 70s, sound of Stevie Wonder’s classic, “Signed, Sealed, Delivered I’m Yours.”

Ermelinda and John were given a wedding card, representing her beloved, grandma, Ermelinda, myself, sister, Nora, brother Jesse, son Paul David & Tonye Michelle Sanchez, it reads "You two have something special. Everything you share--all the little moments of giving, laughing and dreaming--adds up to love. . . great big love! “Today is about celebrating that love. Your life together, and the joy within your journey.”
Congrats John & Ermelinda 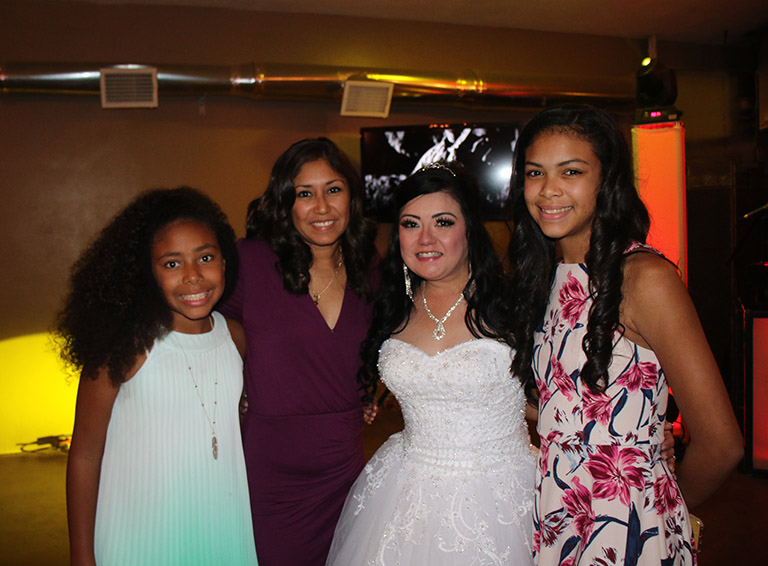 NOTE: a big thank you to my niece, Kathleen Martinez, who assisted me in coordinating everyone afterward in the photo shoot of both Dupree-Samaripa family members; also to Angelica Peña and my niece, Thessalonia Samarripa for taking photos of Ermelinda prior to wedding. And last, but not least, thanks to Thessalonia's daughters: Tiana and Taliyah for their part; Tiana greeted guests while Taliyah recorded the wedding. 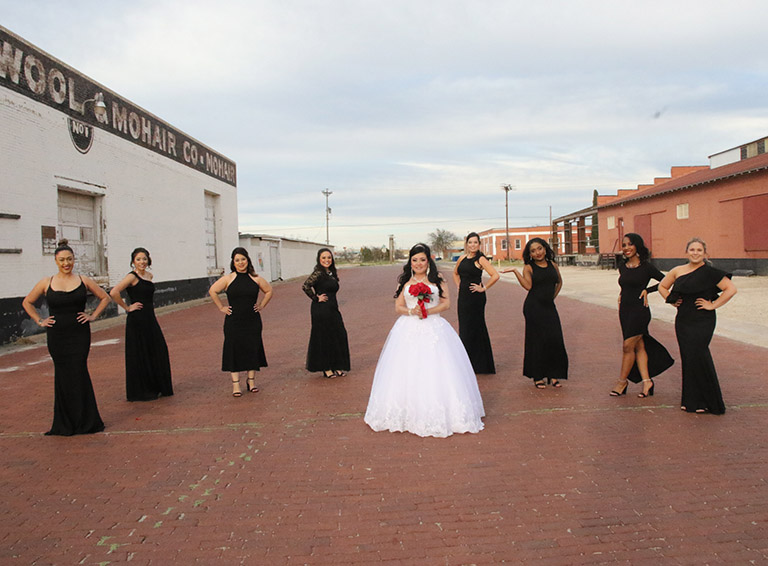 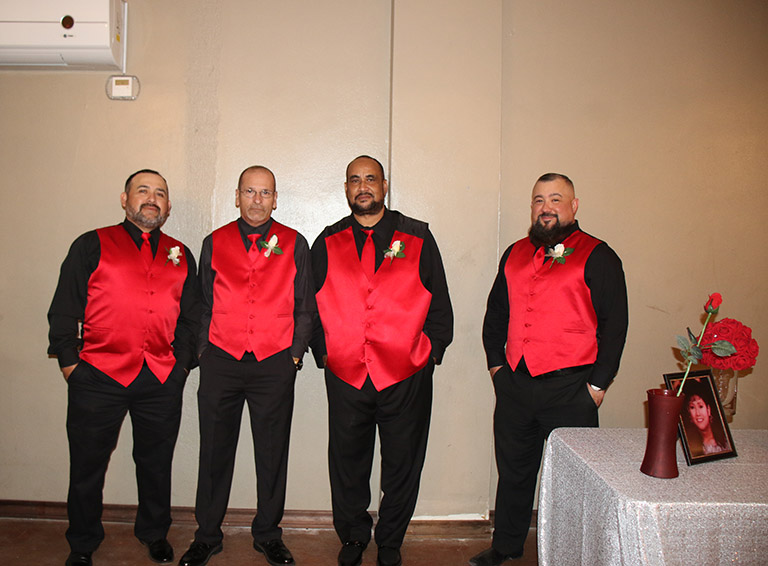 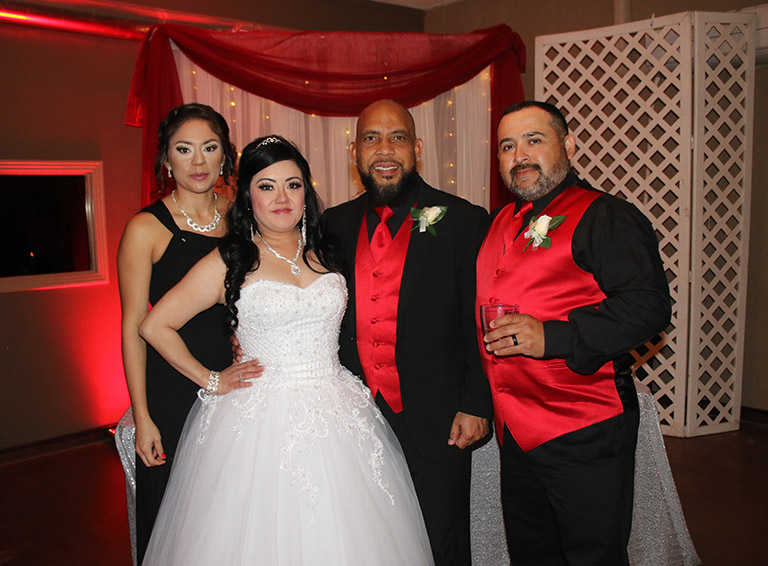 At the Dupree's wedding reception, Angelica Peña, Ermelinda’s maid of honor made her brief celebratory toast to the bride/groom. "I love Ermelinda like a sister and am proud of her on this special day; she is marrying John Dupree."
Angelica went on to say that what rang so clear in her head and heart was that Ermelinda's mother, Rose Sanchez-Samaripa is in heaven and looking down on her on this day that she is incredibly proud of her.
"She is such an amazing mother and she is going to be an amazing wife to John." "I'm so excited about the future you two are about to embark on." God bless your marriage, today and always!" I love you germ and I love you John," concluded Peña.

John's best man, Josh Talamentes, started his toast like this. "There's come a time when we hope to meet the true love, our soul mate; the person we know is going to love us for the rest of our lives." "Well, that moment came for John 14 years ago when he met me." None of us saw Josh' s unique sense of humor in his introduction. He further commented that when Josh lost a brother and his mother, out of all the friends, John was there for him like a brother, a friend through some hard times. "I'm truly blessed to have you in my life, John, I really am." "It is an honor to be here, representing you as your best man, concluded Talamentes. 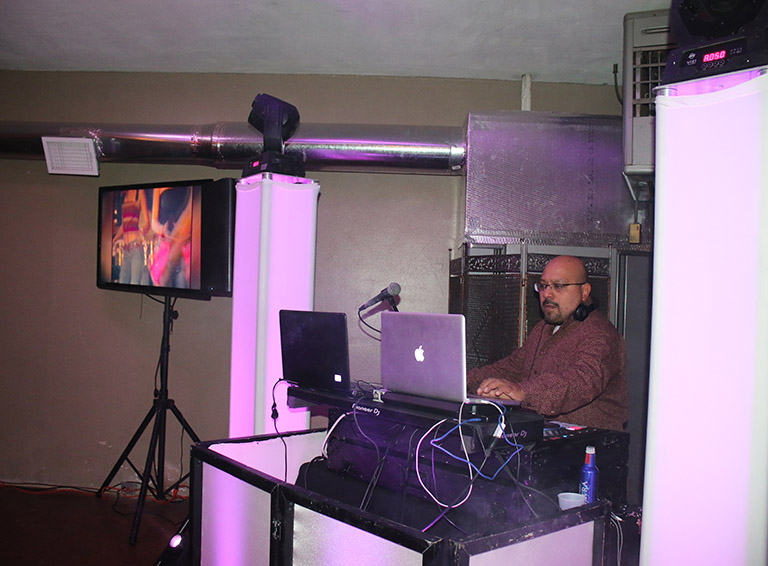 The reception party got started with DJ NRG Chris Fernandez in the house who introduced Ermelinda and her father, Tommy with their special father-daughter dance. Then John and his beautiful bride, Mrs. Ermelinda Dupree, got to do their first dance together to Coffee Anderson’s “Better Today.”

The Dupree husband, wife duo was followed by Ermelinda’s dance with her seven-year-old, Elijah’s own requested song—"Wagon Wheel” by Darius Rucker.
https://www.youtube.com/watch?v=BrsHGK4LT74

The Dupree Samaripa wedding was catered by Zeke Franklin who made the brisket, Bernie Longoria owner of Jalapeño's Loco made rice/ beans; and Mrs. Emerlinda Dupree’s cousin, Eva made potato salad.