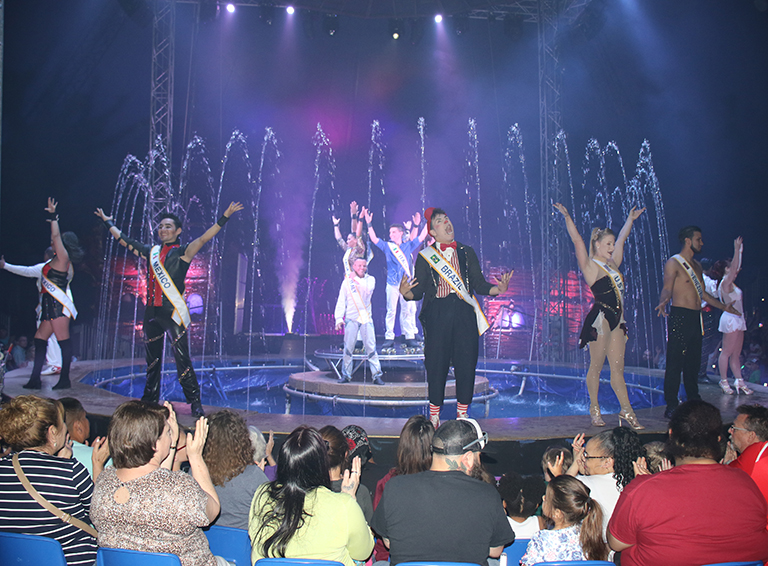 SAN ANGELO – Cirque Italia’s family-oriented show stopped off in San Angelo over the Easter weekend with a three-day holiday, six scheduled performances as globe travelers, from 15 countries ranging from Argentina to Brazil, Italy, Mexico, Venezuela to the United States were greeted by West Texas families with their children who came aboard the majestic port City of Cirque Italia to support these European style performers. 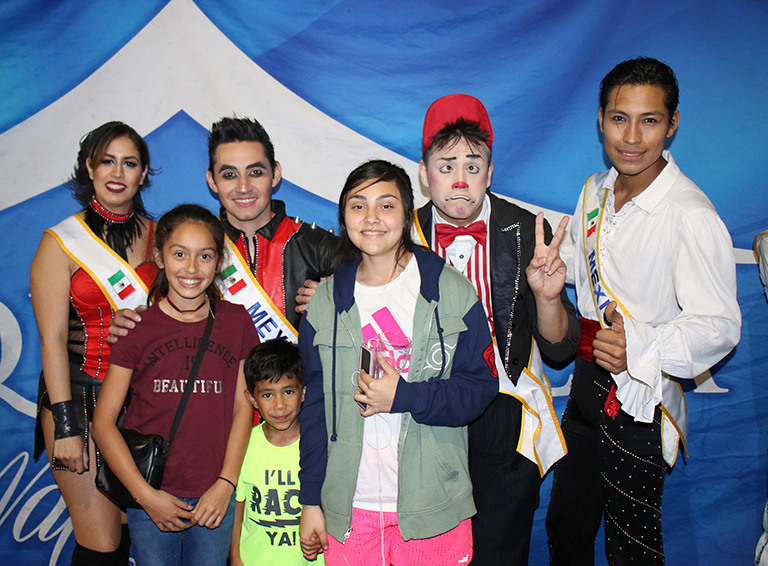 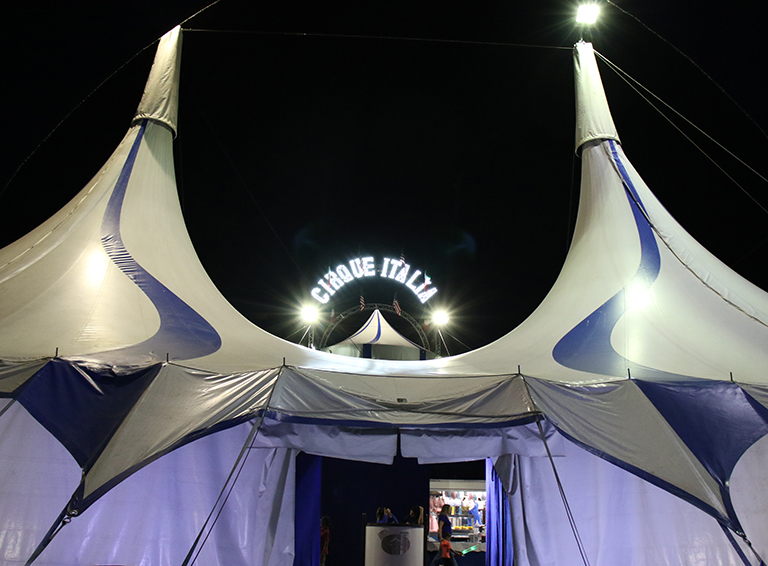 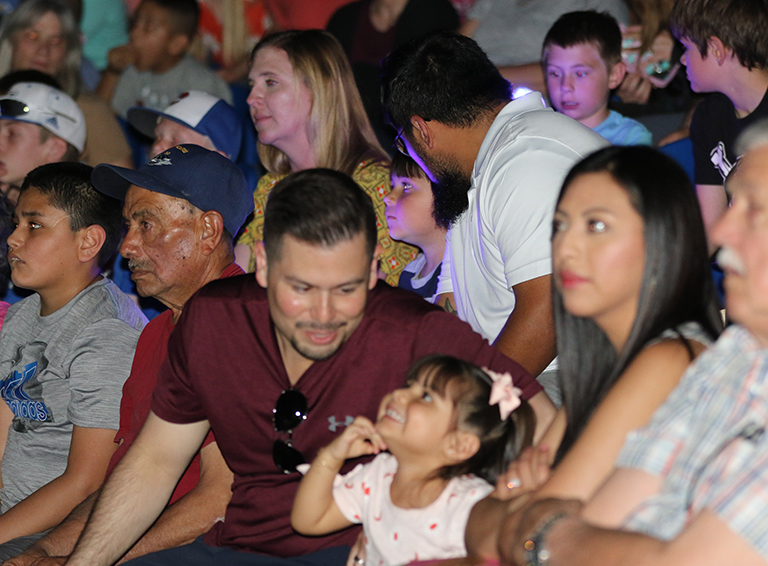 Once the audience entered Cirque’s white and blue swirling canopy tent, (anchored on the Sunset Mall’s parking lot located in close proximity to the Sears Parking lot side) they saw a stage that was transformed into a port city. Just as Italy offers a wide variety of food, culture, and personalities, Cirque Italia offered spectacular variety of acts which included: a contortionist, archery, aerialists, and the death-defying Wheel of Death, per its press release.

Among the entertainers Flaco Guapo interviewed were a juggler, several aerialist dancers and an aerial lyra performer. The first individual interviewed was Miss Morgaine Rosenthal, an aerialist who was asked how Thursday’s April 18th opening performance went. “I think it’s going great as we’ve really had a positive response from the crowd” 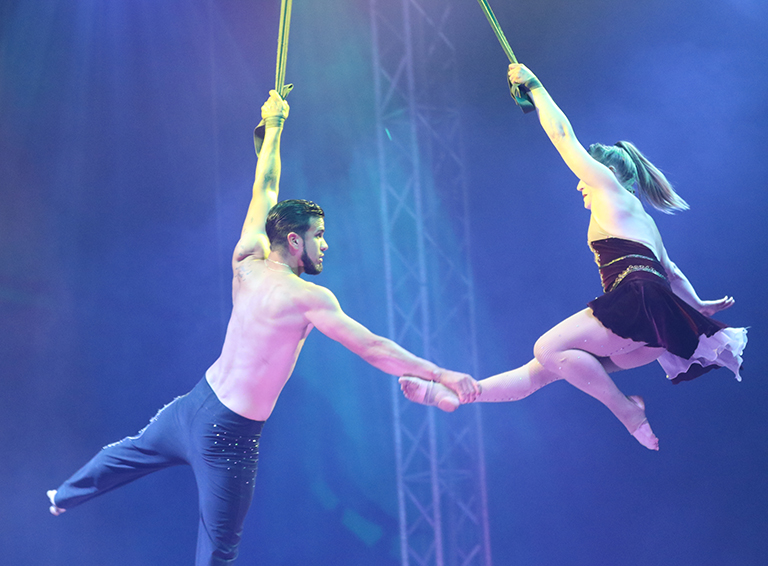 Morgaine was doing a solo act before she partnered with D. Fernandez, who is also her boyfriend of three years. Rosenthal and Fernandez’ chemistry was so great between them that their relationship turned into a professional partnership as D. learned the ropes fairly quickly as an aerialist.
“There was definitely a learning curve. . . but because of our personal relationship, he learned all of the skills very quickly.” “It makes performing so much more fun (together)” said Rosenthal. 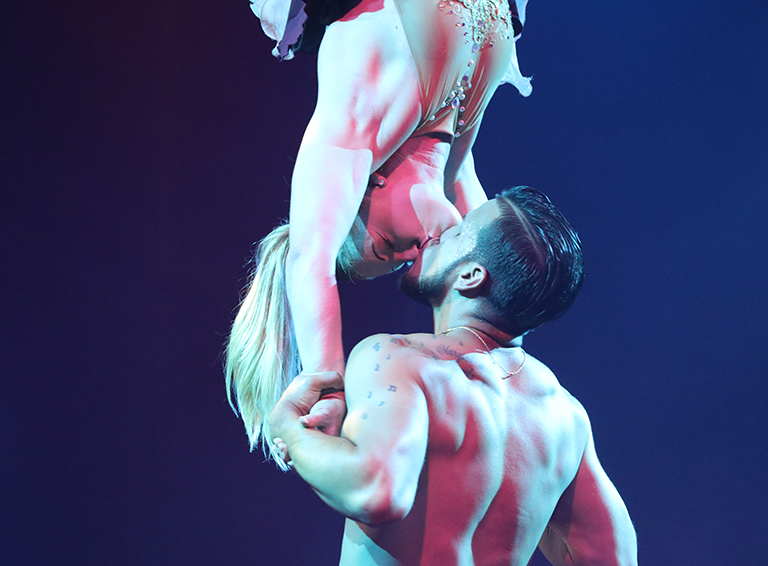 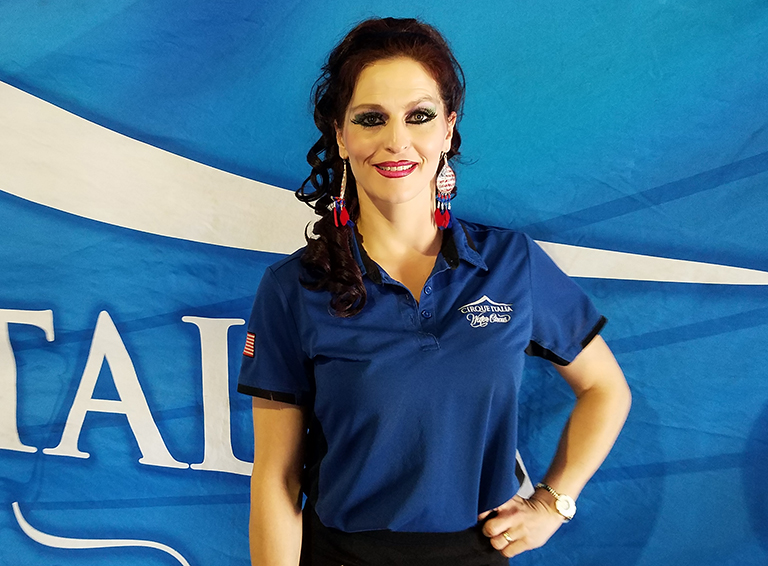 The second performer interviewed was Elena Stefanova. Elena originally from Bulgaria and a former gymnast, has been in the business for 19 years. “It’s nice to see the audience’ reaction when they like what you do and applaud” she said. Stefanova, who speaks four languages: English, Spanish, Russian and Bulgarian, stated she started with Cirque Italia when Manuel Rebecchi, president and owner of Cirque Italia, founded the Italian company in 2012. 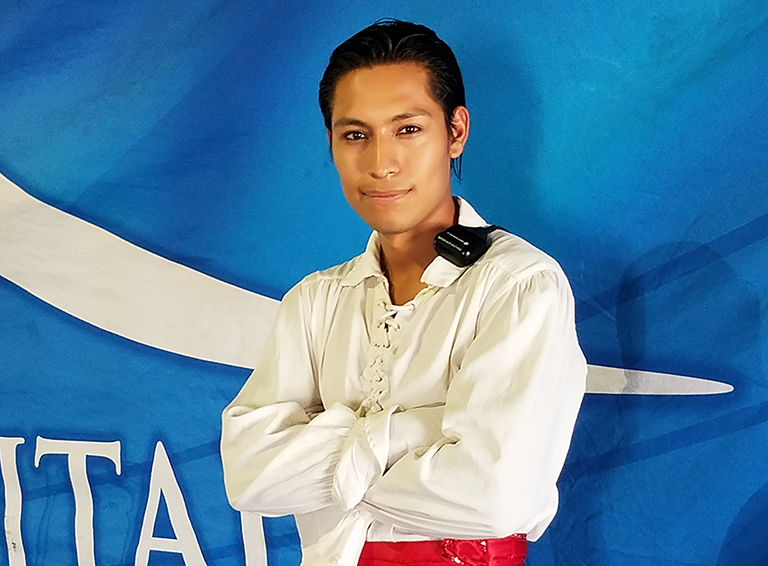 The third performer interviewed was Victor Abadilla. Victor has been a professional juggler for 12 years. He picked up juggling at the age of nine. Since everyone is involved in setting up for the show and has to “juggle” [pun intended] a lot of various duties behind the scenes, Abadilla is part of the group that sets up and tears down the equipment which can be tiring; so he has to practice a little bit more, prior to the first show. 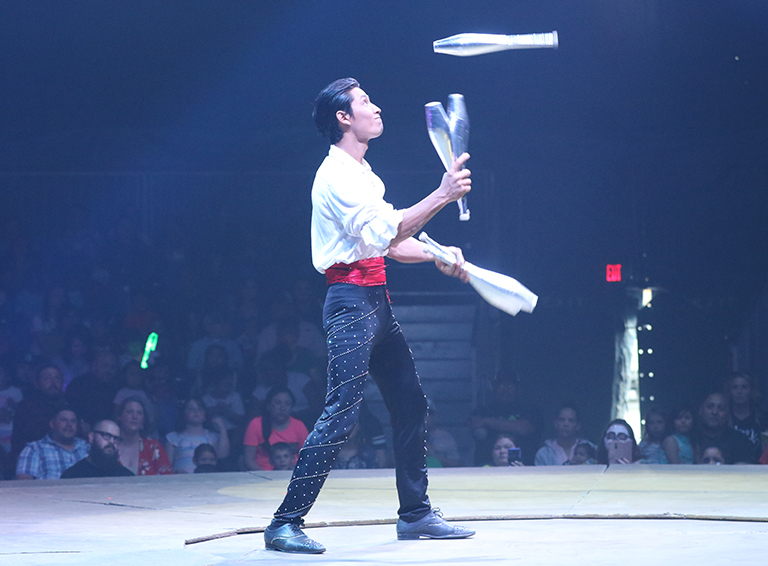 “Your muscles get very stiff, so you do have to warmup a lot.” Here is a one-minute interview with Victor on piece of advice he gives that helped him become a professional juggler. 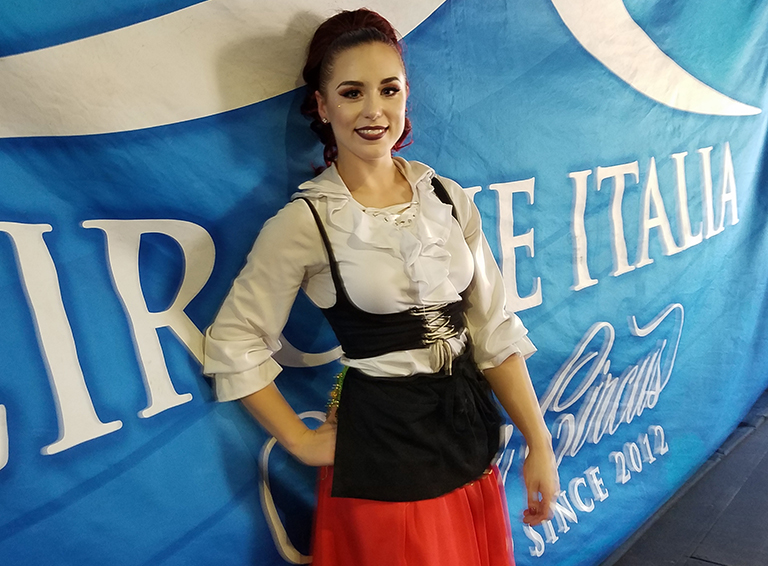 The fourth and final person interviewed was Samantha Kulinski (Aerial Lyra) who will celebrate her one-year anniversary this coming July. Samantha is fairly new to the circus life as she started just three years ago doing her act. “I was always an active and theatrical child.” “And when I was older, I was into rock climbing and adventurous sports.” 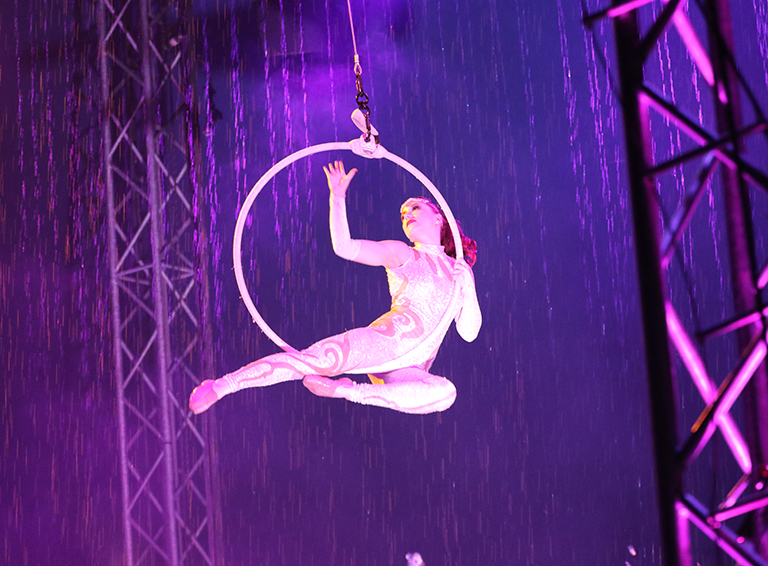 Once Miss Kulinski found out she could take circus classes she thought that was a perfect combination of both love of theatre and physical activity. As for the future, Samantha wants to be in the circus for the rest of her life as her fiancée, Victor the juggler, is an eighth generation performer. 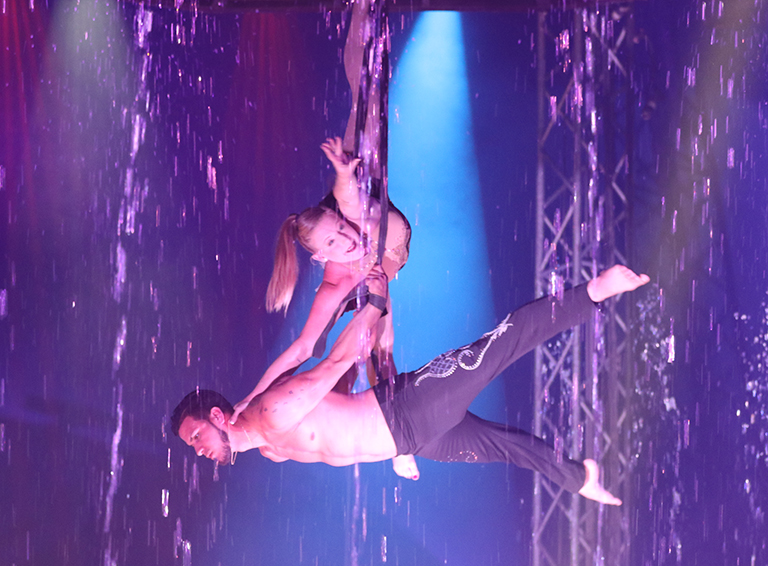 “The community has been supportive of us, really excited. “As a performer when you have an audience that is excited for us being here, it makes us even just as excited to perform for them.” “We work as a team to put on the best show that we possibly can,” concluded Rosenthal on behalf of the Cirque Italia family.