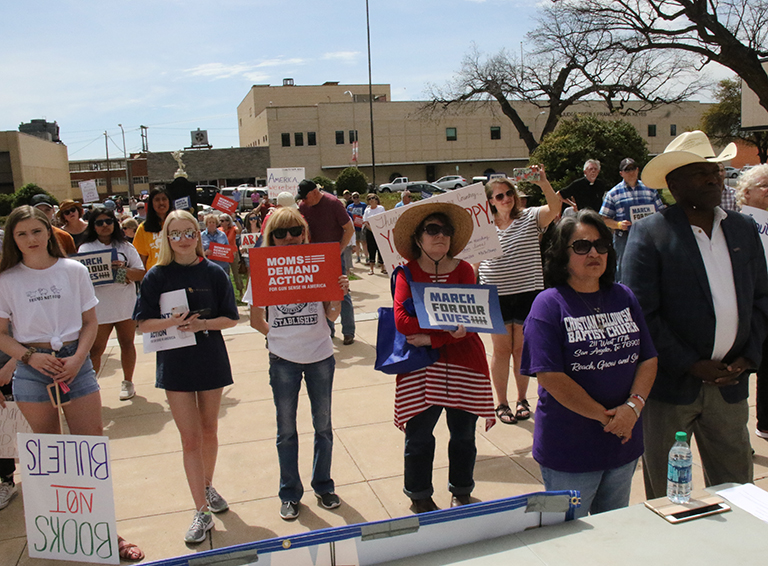 SAN ANGELO – On March 24, the March4OurLives took place as an estimated 1.2 people comprised of students and survivors of gun violence marched across the country. Erica Chenoweth and Jeremy Pressman, researchers, reported that more than “450 marches occurred in the U.S”. 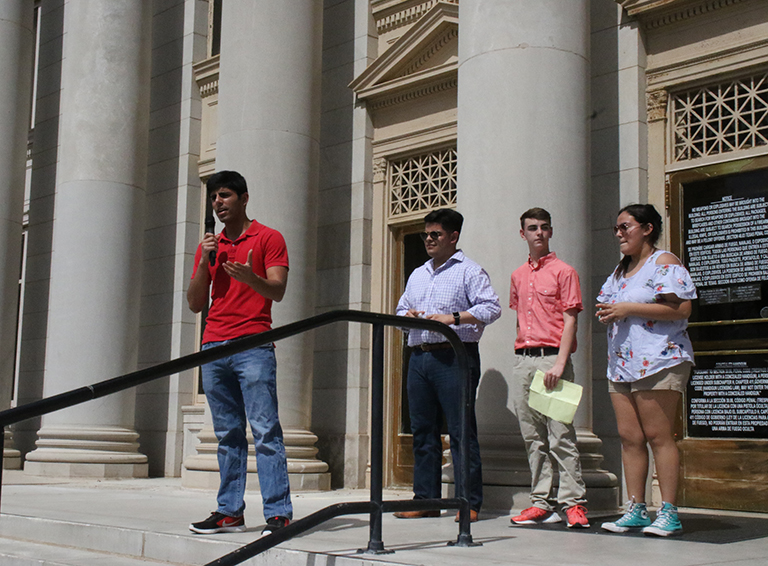 Locally in San Angelo, four Central High School students: Dwarkesh Patel who introduced his fellow classmates Kennadi Velez , a junior at CHS, Peyton Epley a sophomore and James Mayville, a junior, led a gathering of other CHS students, community and its leaders at its own OurLives event which was held at the Tom Green County Courthouse at 12:30 p.m. 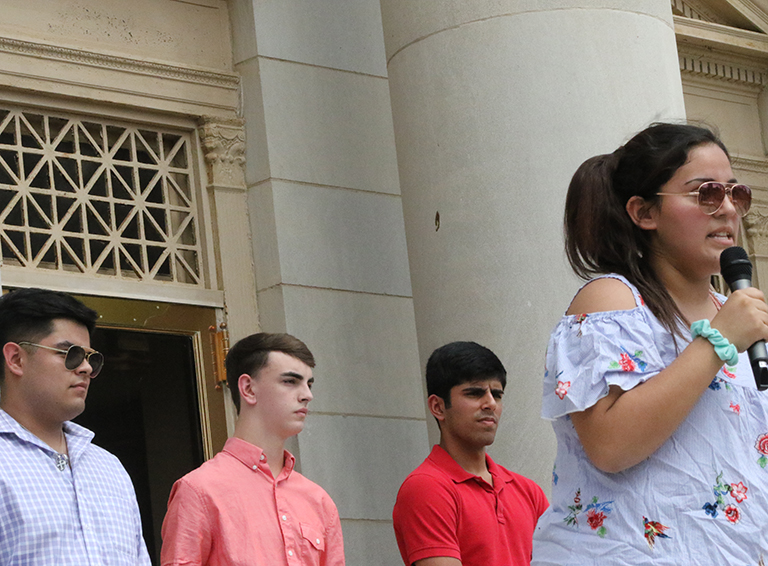 “Since 2013 there has been 290 school shootings; this is not going to be accepted, we have had enough,” said Velez who went first in addressing the 100 plus attendees.
“We’ve heard about gun reform, new gun regulations, but that is not the issue. ” The issue here is that current gun laws are not being regulated,” said Epley. “We can’t just sit around and expect change, we must bring the change.”
The three talking points that students are in favor of: universal background checks, banning assault weapons for civilians, and better mental-health reporting to National Instant Criminal Background Check System (NICS). 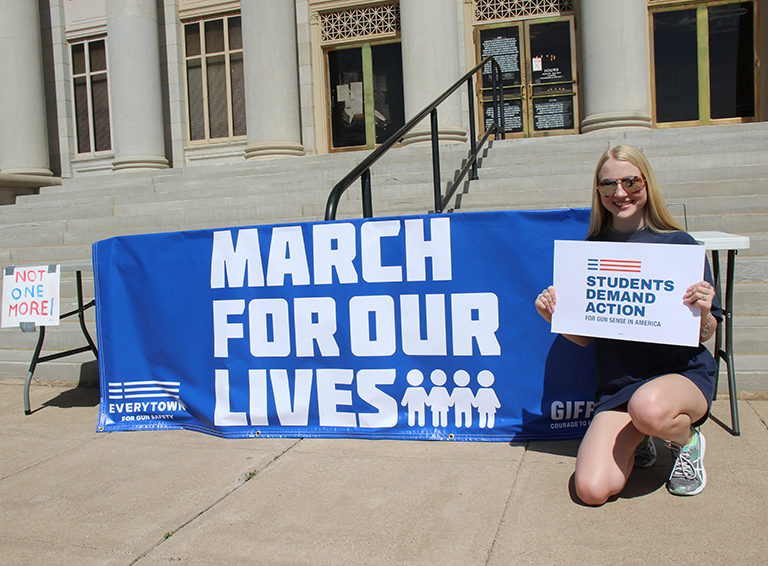 Gracie Wilson, senior at Central, commented on one of them.
“If you are getting a driver’s license, registration is required; when you are purchasing a weapon, they should do very intense background checks to make sure someone who could potentially be dangerous doesn’t get a hold of a weapon which could hurt people,” said Wilson. 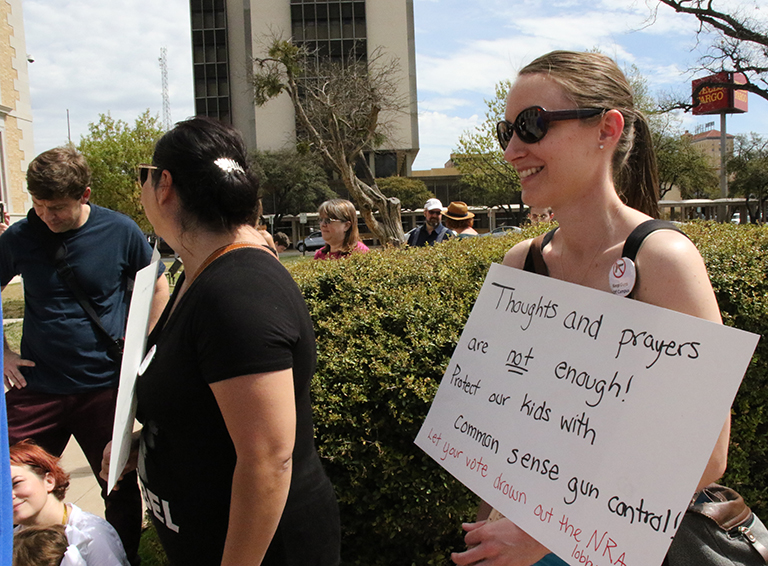 Dr. Steffany J. Homolka, Angelo State University Assistant Professor in the Department of Psychology and Sociology, wore a button that read--Keep guns off campus. She was asked the following question. “Are you in favor of school teachers being armed to protect their students”?
“No, as a professor I feel like I would be so focused on making sure that my weapon is safe.” “My students may feel threaten as a result of my having a weapon,” said Dr. Homolka.
Among the other speakers invited were: Mark Bethune, Las Vegas mass shooting survivor and executive Director of the Concho Valley Community Action Agency, Rev. Charles Greenwell, pastor and priest at Holy Angels Catholic Church and Retired Three Star General and pastor of Christian Fellowship Baptist Church and Ronnie Hawkins, Jr. 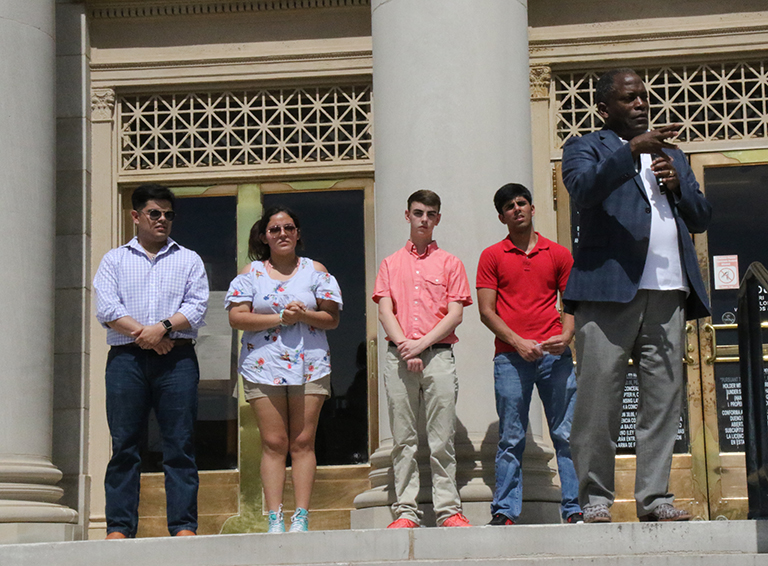 “I would ask the youth here and I say it in a positive sense and all of us in San Angelo, to take the march to our own City Council.” “We have a mayor, a president of our school board, and we need to address this with them,” said Hawkins, Jr.
The national day of action focused on calling for lawmakers to make students’ lives and safety a priority and to pass common-sense gun safety legislation.
Below is a March4Ourlives website that posted a petition which reads.
AN ACT TO PROTECT & SAVE YOUR CHILDREN
“We support the right of law-abiding Americans to keep and bear arms, as set forth in the United States Constitution. But with that right comes responsibility. We call on all the adults in Congress elected to represent us, to pass legislation that will protect and save children from gun violence.
Our elected officials MUST ACT by:
1. Passing a law to ban the sale of assault weapons like the ones used in Las Vegas, Orlando, Sutherland Springs, Aurora, Sandy Hook and, most recently, to kill 17 innocent people and injure more than a dozen others at Marjory Stoneman Douglas High School. Of the 10 deadliest shootings over the last decade, seven involved the use of assault weapons. No civilian should be able to access these weapons of war, which should be restricted for use by our military and law enforcement only. These guns have no other purpose than to fire as many bullets as possible and indiscriminately kill anything they are pointed at with terrifying speed.
2. Prohibiting the sale of high-capacity magazines such as the ones the shooter at our school—and so many other recent mass shootings used. States that ban high-capacity magazines have half as many shootings involving three or more victims as states that allow them. Limiting the number of bullets a gun can discharge at one time will at least force any shooter to stop and reload, giving children a chance to escape.
3. Closing the loophole in our background check law that allows dangerous people who shouldn’t be allowed to purchase firearms to slip through the cracks and buy guns online or at gun shows. 97 percent of Americans support closing the current loopholes in our background check system. When Connecticut passed a law requiring background checks on all handgun sales, they saw a 40 percent reduction in gun homicides. 22 percent of gun sales in this country take place without a background check. That’s millions of guns that could be falling into dangerous hands. A background check should be required on every gun sale, no exceptions. The children of this country can no longer go to school in fear that each day could be their last.”
https://marchforourlivespetition.com/