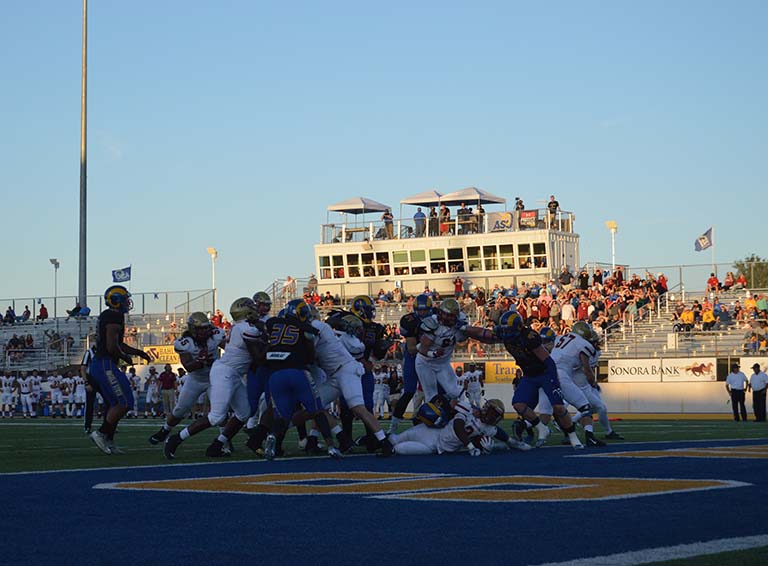 SAN ANGELO - The Angelo State football team was unable to overcome four turnovers against No. 6 Midwestern State as the Rams fell 41-27 on Saturday night at LeGrand Stadium at 1st Community Credit Field.
The Rams (3-3, 1-3 LSC) outgained the Mustangs 535 to 388 on the night including 185 rushing yards to just 91 for MSU, but gave up 15 points off turnovers which made the difference in the loss. 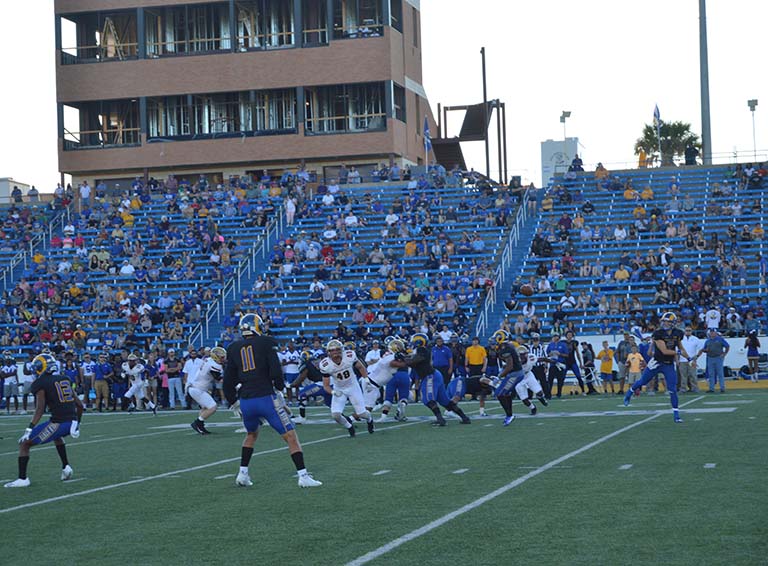 ASU got on the board first in the matchup about halfway through the opening quarter. Defensive back Fred Lawrence got them the ball, picking off MSU quarterback Layton Rabb for his second of the season and 10th of his career.
Lawrence is now tied for seventh all-time in interceptions at ASU.

Quarterback Charlie Rotherham led the Rams down the field after the interception, finally punching the ball in himself on a one-yard run.

Rotherham completed a career-high and Angelo State single-game record of 42 passes on the night for 379 yards and a pair of touchdowns and also rushed for 20 yards and one touchdown.

The Wisconsin native spread the ball around as well, as seven Ram receivers caught multiple passes on the night. Tyler Ahrens led the way with a breakout performance of 10 catches for 100 yards, both of which were career highs.
Lawson Ayo followed close behind with nine receptions for 95 yards and one touchdown and Donovan Thompson had five catches for 53 yards. Thompson now has 2,337 career receiving yards and is fourth in ASU history.

Tyrese Nathan, Tashani Bibbs and Tate Kennedy all had four catches and Alize Thomas had a pair of receptions as well to round out the multiple-catch group.

Nathan was also ASU's leading rusher with 18 carries for a career-high 138 yards and also had four kick returns for 57 yards, giving him 240 all-purpose yards. 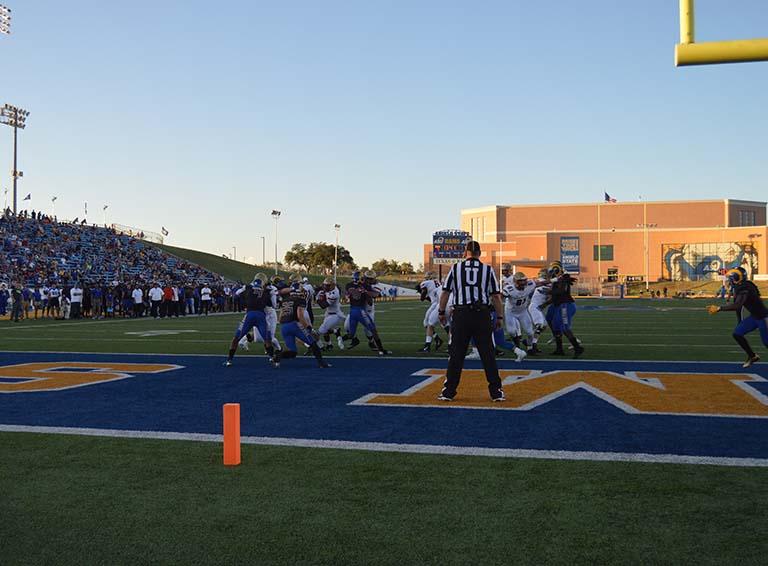 MSU responded with a touchdown drive of their own that lasted almost seven minutes, but Markus Jones blocked the extra point to keep the Rams on top 7-6 in the second quarter.
The block was the third of the season for Jones, who has blocked a field goal, a point after attempt and a punt this season. It was the tenth block of his career.

The Mustangs scored on their next drive as well but missed the kick, taking a 12-7 lead. 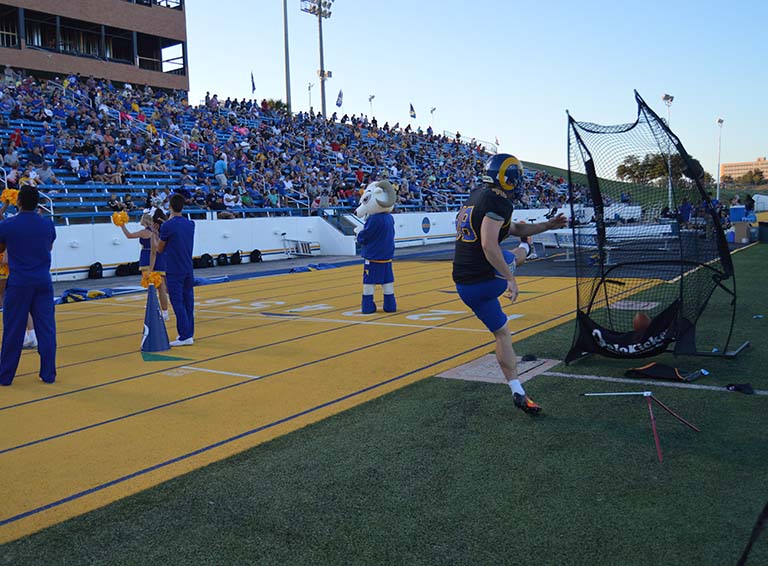 Angelo State scored the only other points before the halftime break, on a field goal from kicker Connor Flanigan. The sophomore put it through the uprights from 52 yards out, tying the third longest field goal in school history
and marking a career high.

Heading into the locker room, ASU trailed by just two point with only 152 total yards of offense.

The Ram defense was led by Bright Ihegworo and Grant Aschenbeck, who both had 11 tackles on the night. Ihegworo also had a pair of tackles for loss and the only Ram sack against the Mustangs.
The defense also limited MSU to 5-of-13 on third down.

Flanigan got the next Ram points as well, this time hitting from 38 yards out to bring the Rams back within six with 6:01 left in the third quarter.

MSU kicked into gear at that point, scoring 21 unanswered points to gain a 27 point lead with four minutes left in the game. 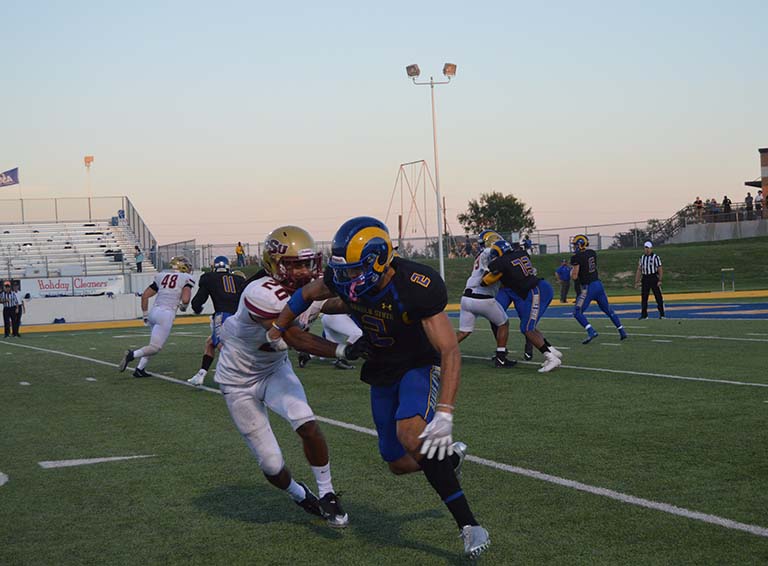 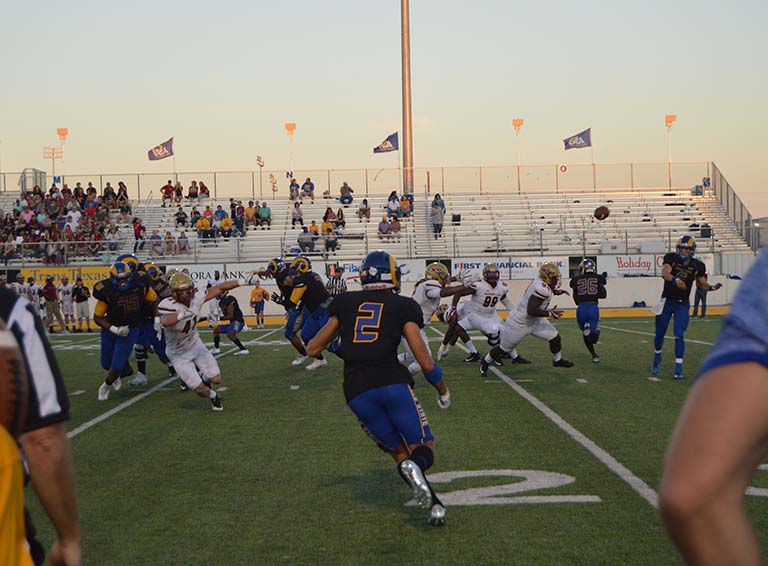 The Rams fought back in the final part of the fourth quarter, scoring a pair of quick touchdowns to bring the game back within 15, but it was too late for a complete comeback.
Rotherham found Ayo on a 16 yard pass. After recovering an onside kick, Rotherham found Spencer Gilbert II for a four yard touchdown to make the final 41-27.

Angelo State will be on the road next week taking on nationally Texas A&M-Commerce on Saturday, Oct. 21 at 4 p.m.