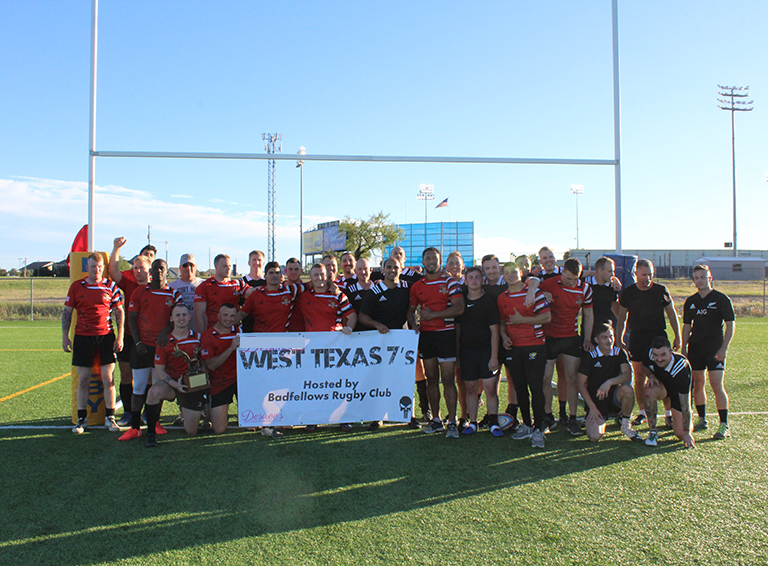 SAN ANGELO – Saturday, November 3rd Goodfellow Air Force Base in accordance with Angelo State Ram Rugby hosted the first annual West Texas 7s Tournament at ASU’s intramural complex.
It was a tournament comprised of a five teams, Goodfellow’s team the Badfellows, Fort Hood Army Base’s team the Phantoms, and ASU was split into three teams, rookies (Flying Rams), veteran players (Angelo State Selects), and a heavyweights squad made up of both rookies and veterans who were 215lbs or over (Clydesdales).
The tournament was round robin style which meant every team plays each other once and the team with the most wins would claim the trophy.
Ft. Hood went on to win all their matches and become the champions of the tournament, but the ASU veterans were a close second losing to Ft. Hood by only 4 points. The final match of the day was a competition for third place between the Clydesdales and Badfellows in which the Badfellows came out on top.
“This is a relationship that I’d like to continue building (between ASU and Goodfellow AFB) and next year grow the size of the tournament by bringing in more teams, turning this into an annual event,” said Sergeant Anthony Kisiday of the 17th Communications Squadron who is the founder of the Badfellows club and organizer of the tournament as well as a former ASU Ram Rugby player.
As for Ram Rugby, they are set to face TCU Rugby in an exhibition match on Saturday, November 10th in Fort Worth. This will be their final match of the semester and are currently 3rd in the Lonestar Conference.