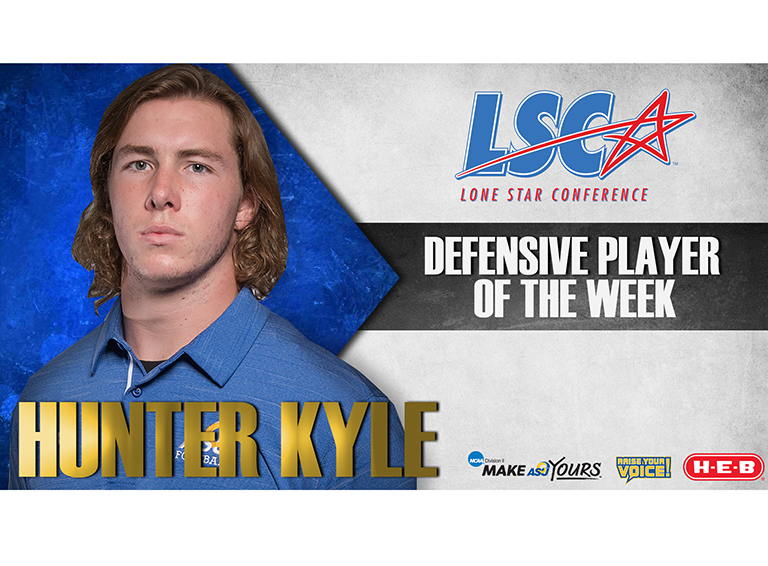 A sophomore from Wichita Falls, Kyle picked off his first pass on the second drive of the game by the Wolves at their 21-yard line to set up an ASU field goal and then his second with 3:43 remaining in the game to stop another WOU drive. Kyle finished the game with 10 tackles for his fourth double-digit tackle performance of his career for the Rams.

"This is a great honor for Hunter," ASU head coach Will Wagner said. "His performance is a credit to the hours he has spent preparing on the field, in the weight room, and in the video room. Hunter's dedication and leadership is a huge part of our defense's success."

Kyle now has 76 tackles and three interceptions and earns the first LSC Defensive Player of the Week in his career. The ASU defense limited Western Oregon to 13 first downs and 313 total yards in the game, led by Kyle and Grant Aschenbeck who had 14 tackles in the game. Markus Jones would add seven tackles with two sacks and DeShaun Douglas had eight tackles for the Rams. Simon Maxey picked off one pass to give the Rams three on the day.

Angelo State returns to action at 6 p.m. on Saturday, September 8 when it travels to play Abilene Christian in Abilene. The Rams and Wildcats are playing each other for the first time since 2012 and with ASU owning a 28-22 advantage in the all-time series. ASU earned a 28-23 win over ACU at San Angelo ISD Stadium in the last meeting back in 2012.