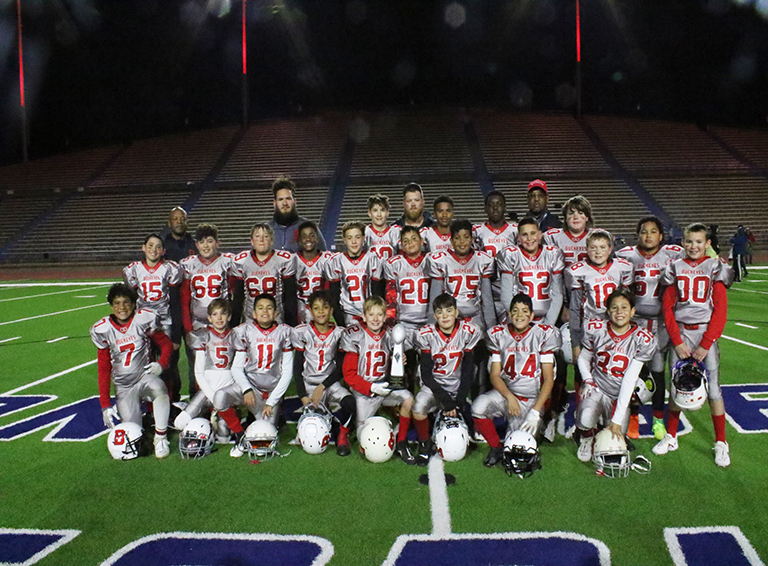 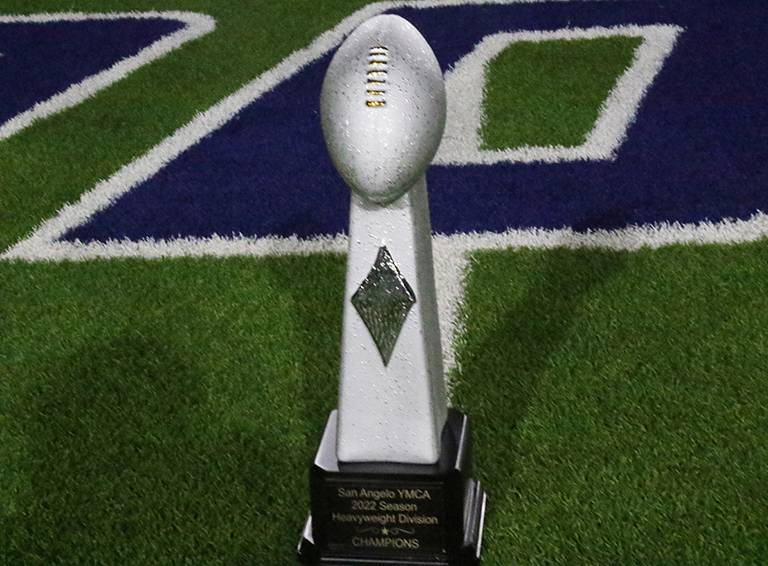 SAN ANGELO – Under the bright lights of San Angelo Stadium where the stakes were bigger and the pressure was greater to see which team would be the Super Bowl champ, one YMCA heavyweight division team, the Buckeyes’ (7-0) mantra from its first-round playoff win last weekend was “finish what we started.” The “scarlet and gray” Bucks finished what it started, but it took overtime before the Bucks held off the (6-1) Hawks, 13-12 to win the 2022 Super Bowl. Coach Tim Griffis’ “scarlet and gray”, Buckeyes capped off a magical run to finish off a perfect season, 8-0. And for good measure, throw in the hardware a Super Bowl trophy that comes from being crowned the king-of-the-hill, champion. 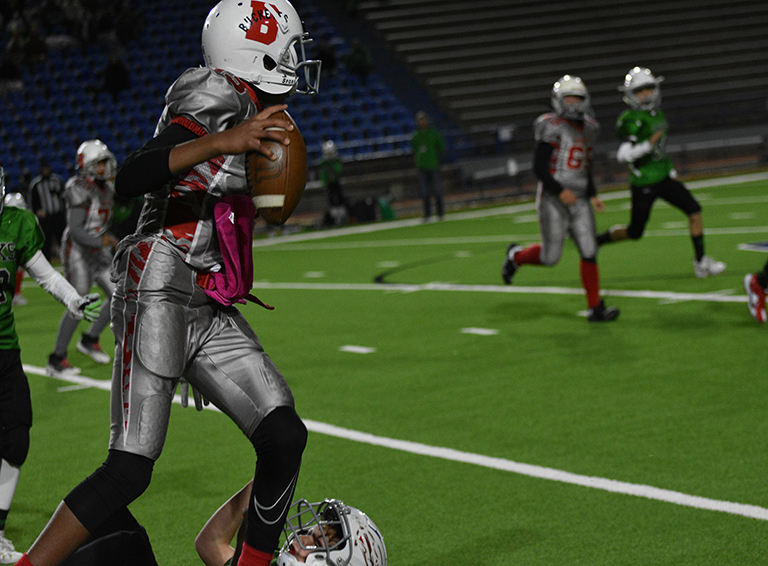 The Super Bowl finale rematch from the week three meeting won by the Bucks 201-13 was a lot closer the second time around. The Bucks’ explosive offense led by Andrew “Prime Time” Young couldn’t find any rhythm in its first series nor any other time during the first half. 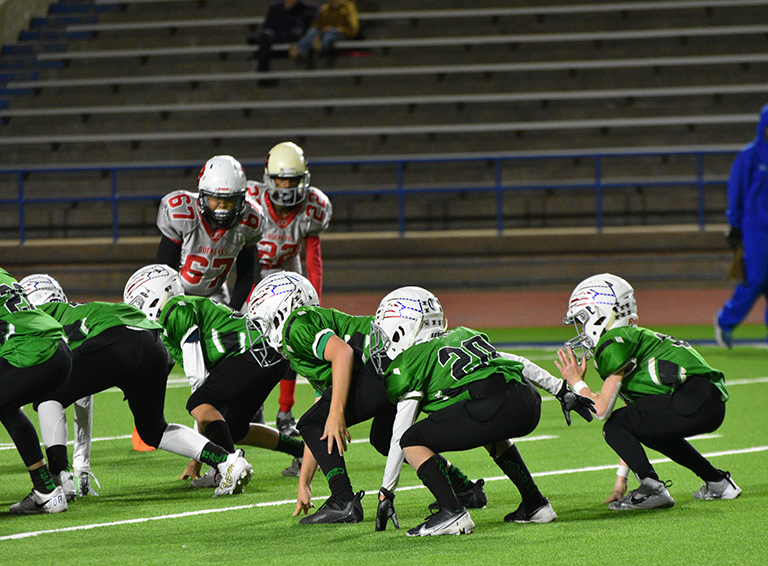 Meanwhile the Hawks’ three-headed back attack led by quarterback, Hudson Neal, just grounded-and-pounded the Buckeyes defense, running wild on the flanks with consistency. Although Coach Josh Loudermilk’s ground game offense went up and down the field gaining more than three yards-and-a-cloud of dust, it couldn’t turn all that yardage into points on the scoreboard. Evidenced by the 6-0 lead in the second quarter which turned out to be the score at half-time. 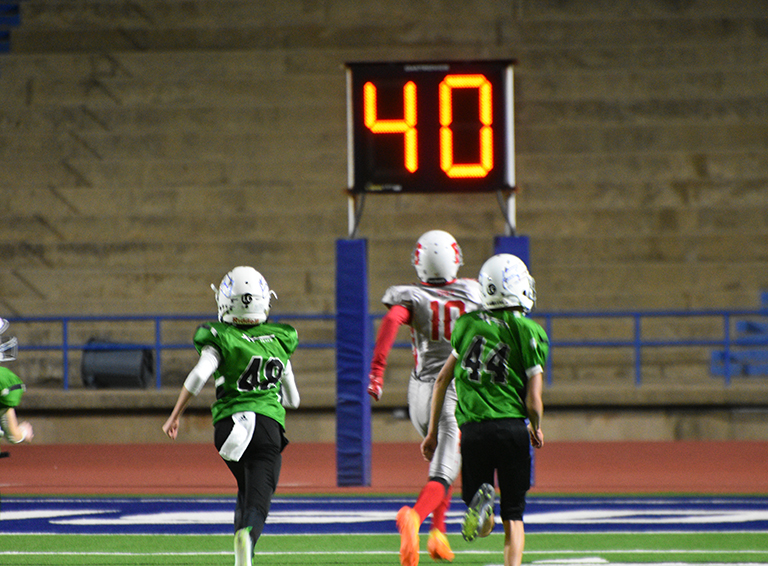 Although the Hawks scored first, it would be the Bucks who scored at the end when it counted the most. The Hawks’ Neal scampered in for the touchdown with less than four minutes left in the second quarter to lead 6-0.
In the second half which by then was late into the third quarter with 2:56 left, “PT” Young dropped back from about the 40-yard-line, and threw a deep ball to wideout, Braxton Diez who got behind the Hawks’ secondary for a 60-yard, catch-and-run touchdown to tie the game, 6-6.

With no score from either team in the fourth quarter, Buckeyes’ Coach Griffis, and Hawks’ Coach Loudermilk met with officials to decide which team would get the ball first in overtime. The Buckeyes got first crack from the 25-yard line to take the lead. Facing a 4th-and-one, “scarlet and gray’s” Young ran around the far-right side to barely punch it in for a score and the lead, 12-6. The Bucks’ staff decided to go for one point instead of two and got it on a run by Zechariah Cuevas to take a 13-6 lead. 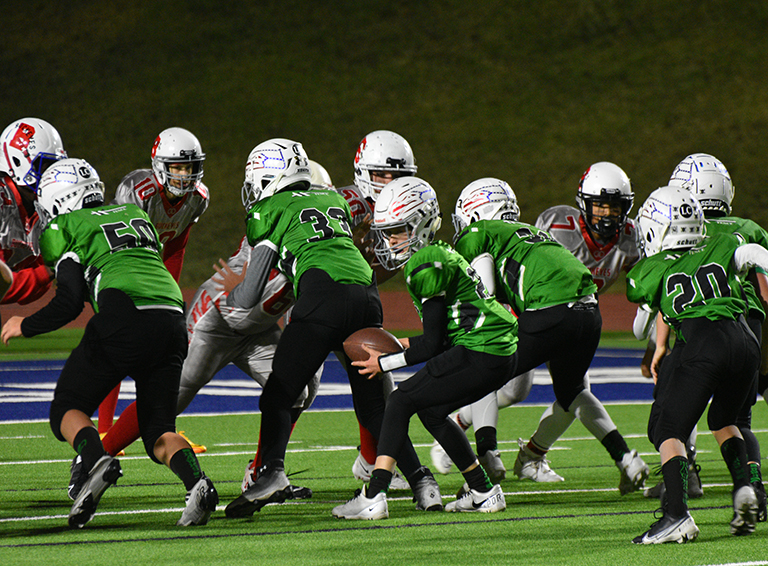 The Hawks’ offense took the field knowing it had to score, and it did to make it 13-12. The decision to go for two and the win for the championship was put in the hands, or in this case the right arm of quarterback, Neal. Neal rolled out to his right only to find defender Jonas Griffis was closing in fast. With the Hawks’ quarterback and his team’s season riding on this final pass attempt, waiting there in the end zone was Sean Andahwa who made the play on the ball to intercept it, and end the Hawks’ season at 7-2. 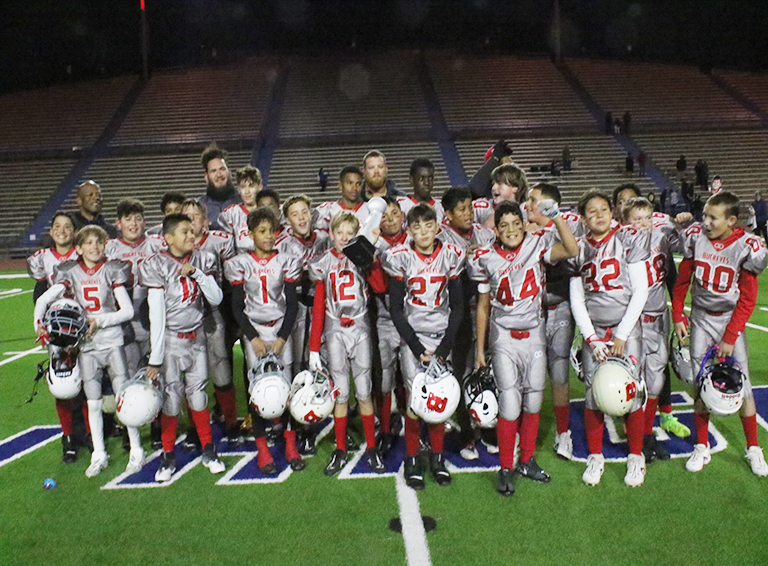 Once the coaches and 24-member team got in the playoffs, the “finish what we started,” season was capped off with a perfect 8-0, record, and the trophy hardware to hoist as the San Angelo YMCA’s 2022 Super Bowl heavyweight division champs.