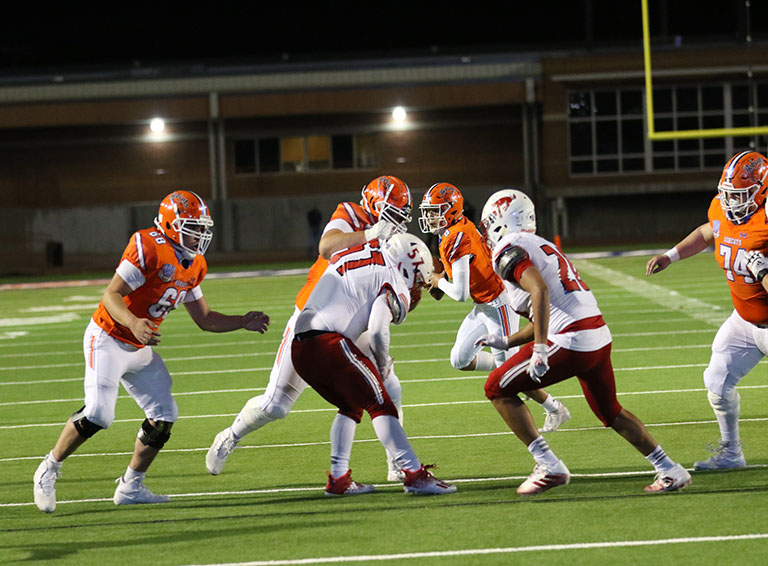 SAN ANGELO —Malachi Brown capped off his week with one hardware, the other a district win. First, the Central High School Bobcat quarterback’s hardware came in the form of a crown. Malachi was crowned Homecoming King at CHS’s pep rally on Thursday, October 30. Brown then capped off the weekend with an “easy peasy” District 2-6A win over the Odessa Bronchos, 38-7. 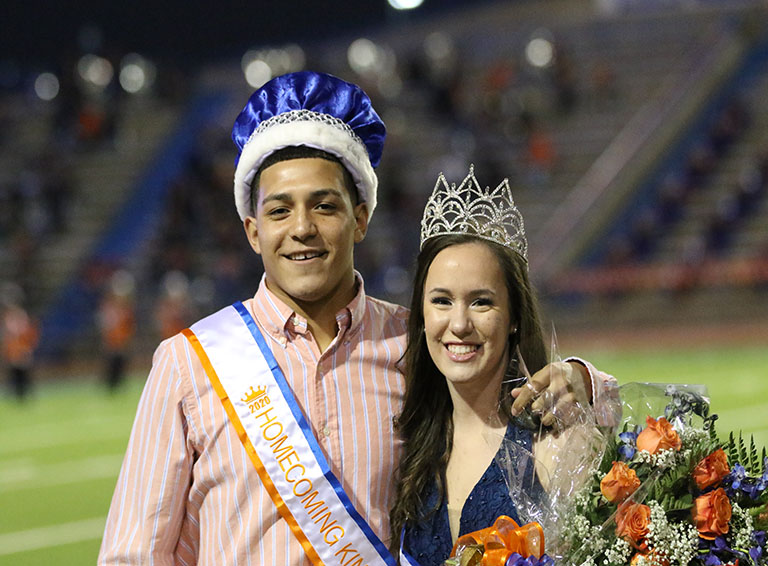 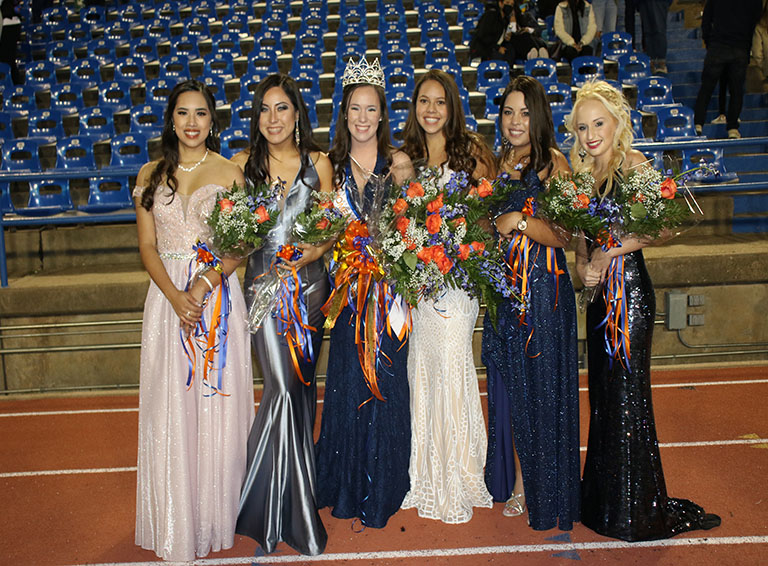 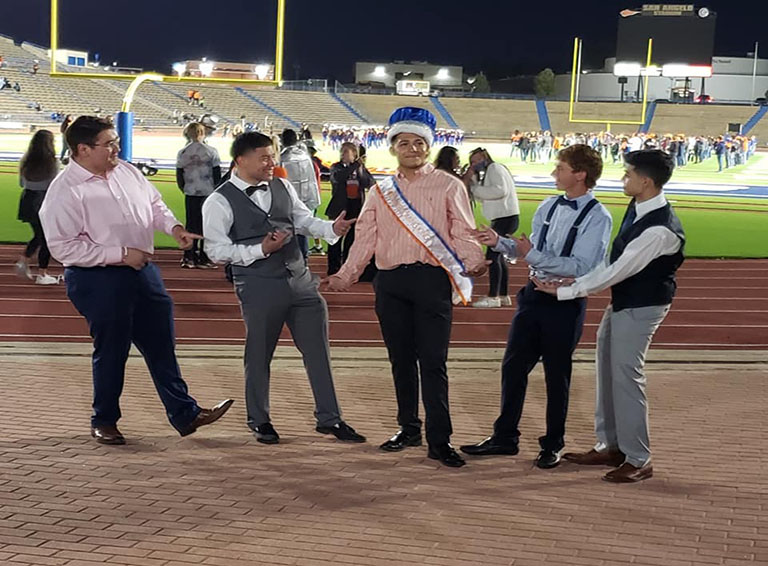 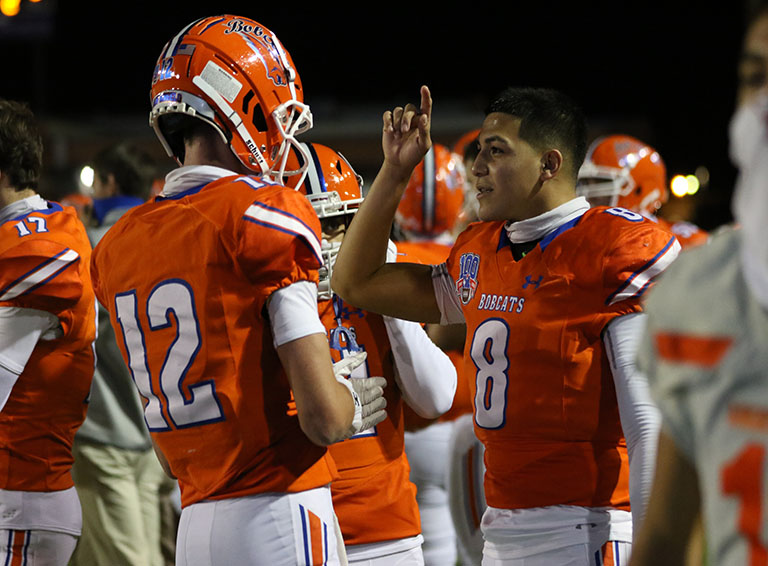 Brown earned both king-of-the-hill crown and a District 2-6A "easy peasy" win. On the night, Malachi completed 75 percent of his passes for nearly 300 yards. 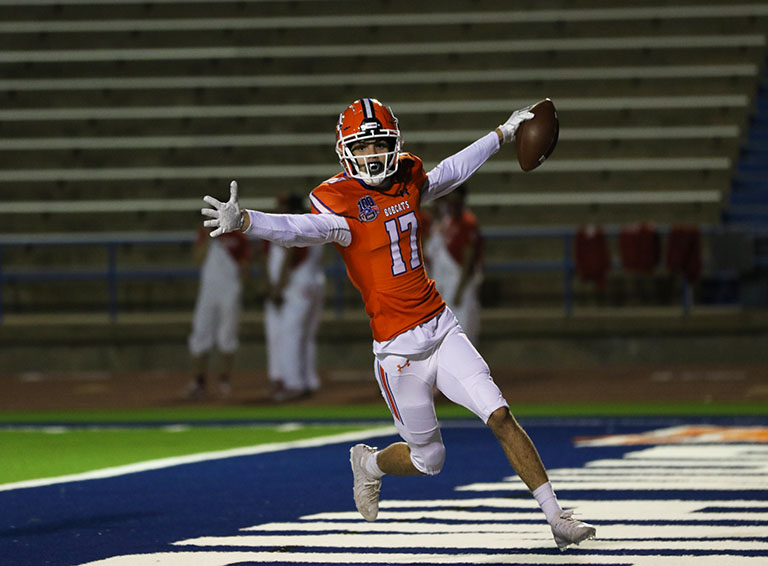 The senior quarterback and his offense performance on the first couple of drives ran into speed bumps with misfired passes to his receivers and different looks from the Bronchos’ defense. Once the Cats got untracked, the offensive fireworks lit up the San Angelo Stadium scoreboard. Brown, scorched the Bronchos’ secondary with passes ranging from intermediate to deep balls as he connected with four different receivers with four touchdowns--in the first half alone. The first touchdown was a slant pattern to Weston Hill that went for 19 yards. After the PAT, CHS led 7-0 with 4:32 left in the first quarter. 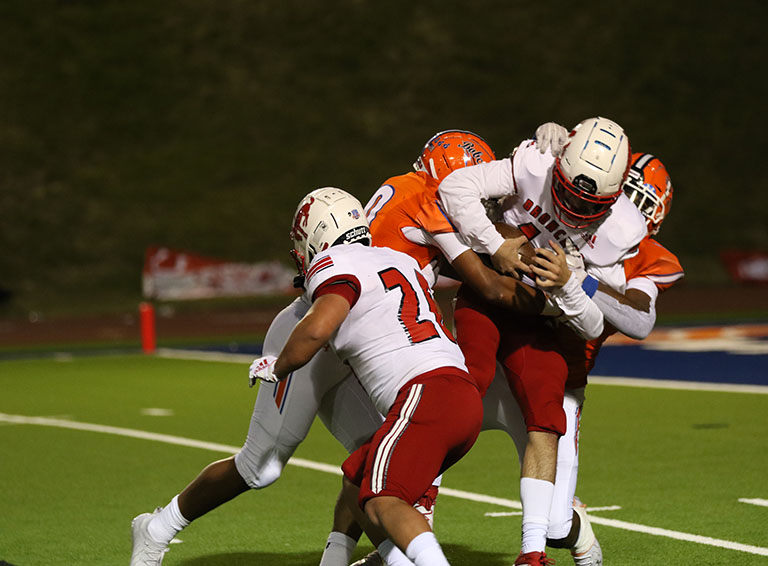 Meanwhile, Central’s stone-wall defense was relentless as it set the tone on Odessa’s first two offensive drives. Bronchos’ quarterback, Diego Cervantes was sacked on third down. The next time up for Odessa was worse as the Cats’ backed up the Bronchos on three consecutive plays for negative yardage. 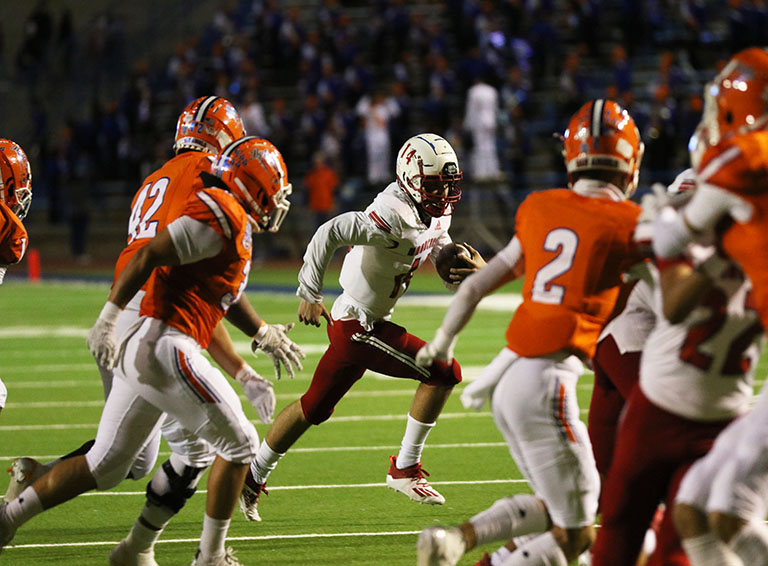 As for how Odessa got their only touchdown of the first half, it came at the expense of Central’s kicking unit as it was flagged for an infraction. The penalty set Odessa up at the Cats’ 29-yard line from where the Bronchos were able to score in three plays. 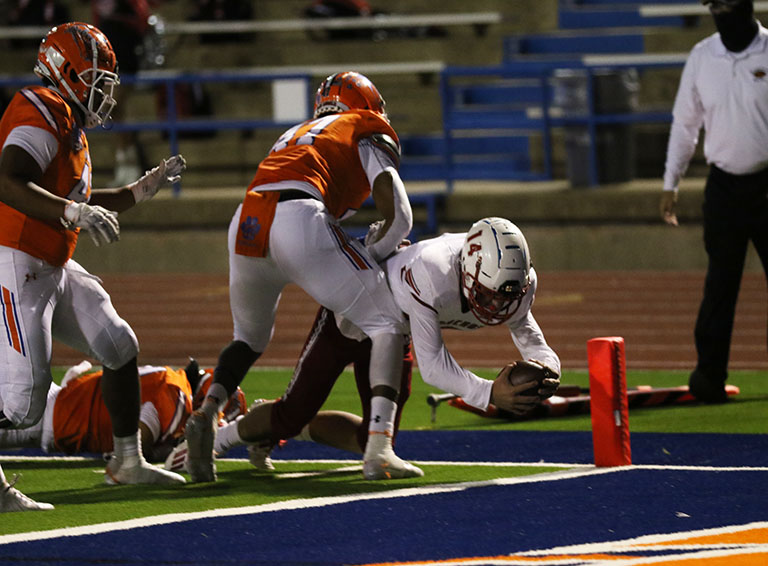 Cervantes, on a quarterback keeper, rolled left escorted by a convoy of lineman to get in from 12 yards out to tie the game, 7-7(PAT.) The score came with 11:36 early into the second quarter. 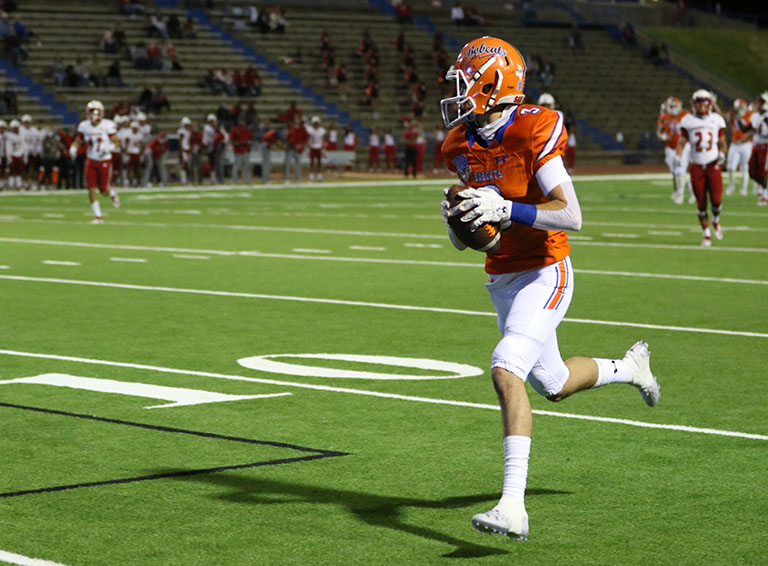 After that Bronchos touchdown, the Cats’ Brown led his team to the next 31 unanswered points to cruise to that “easy peasy” third district win of the season. Malachi finished off the second quarter with three more touchdowns. 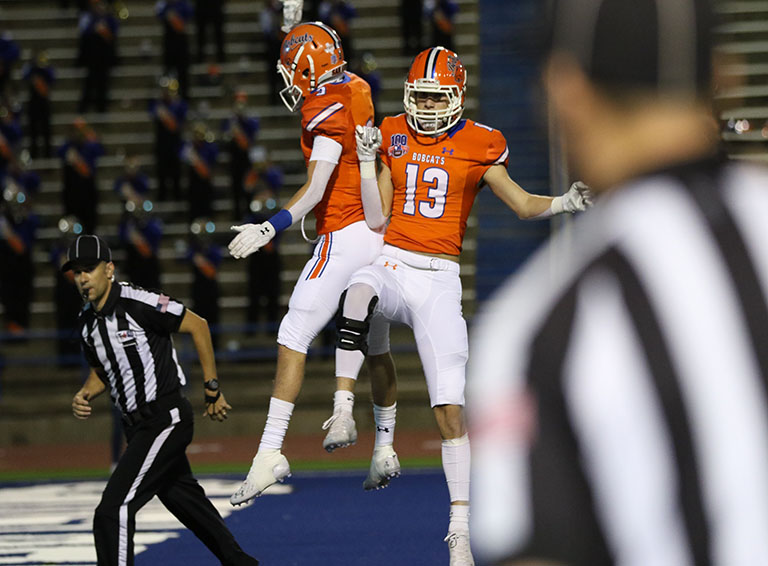 The first touchdown went to Tripp Noble, a 40-yarder. The next man up was wideout, Seth Levesque, who only had to go 13 yards. That made the score, 21-7. 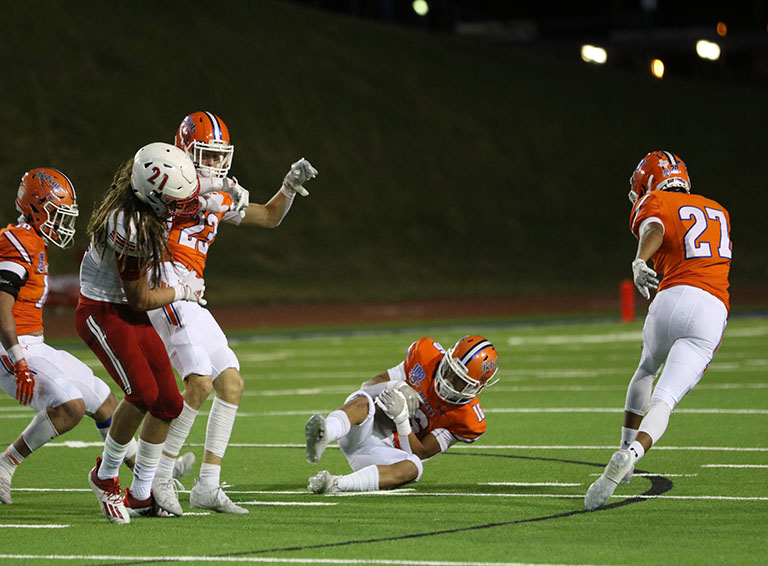 The Cats’ defense set the table for their offense to get that score. Bronchos’ Cervantes on a third-and-long got heavy pressure from CHS’ defensive front which forced him into an interception. Defensive safety, Andrew Lara was there to pick off the errant pass that set Central’s offense up at their own 45-yard line. 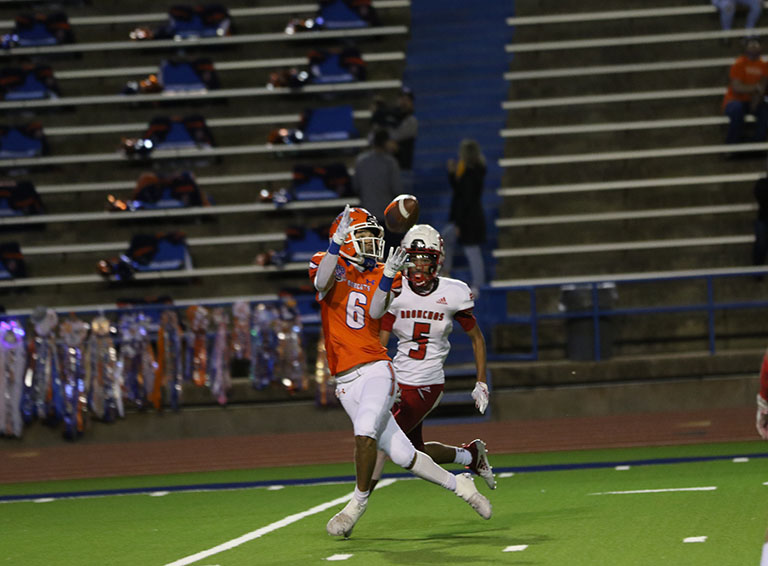 Oh, and as for Brown’s fourth TD before the half. It was a slightly deeper ball, a 43-yard variety to Jalen Leifeste. 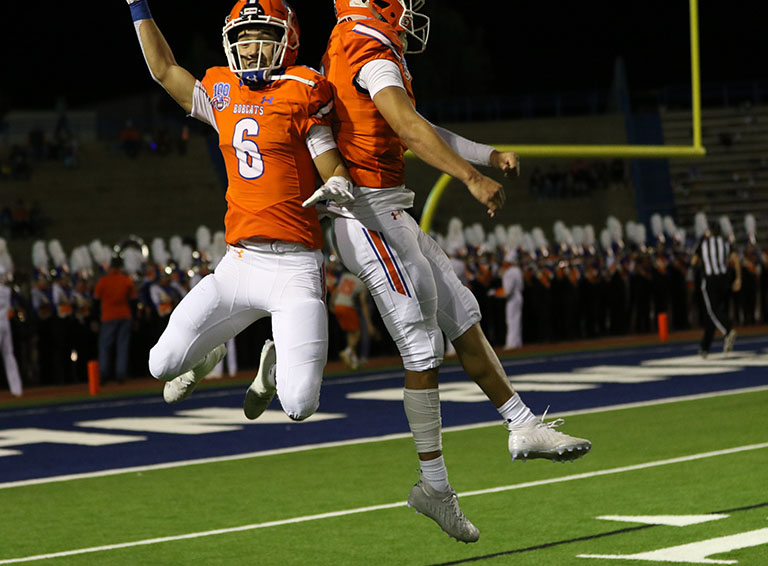 After the PAT, it was CHS 28, OHS 7 with 1:35 left in the second quarter. With less than a minute to go before the half, Brown got his offense quickly into scoring position again. Field goal kicker, Ethan Aguilar, got off a 19-yarder as the half ended with the Bobcats ahead, 31-7.

In the second half, Brown finished off his night with his fifth touchdown, a 20-yarder to Levesque (his second of the game.) 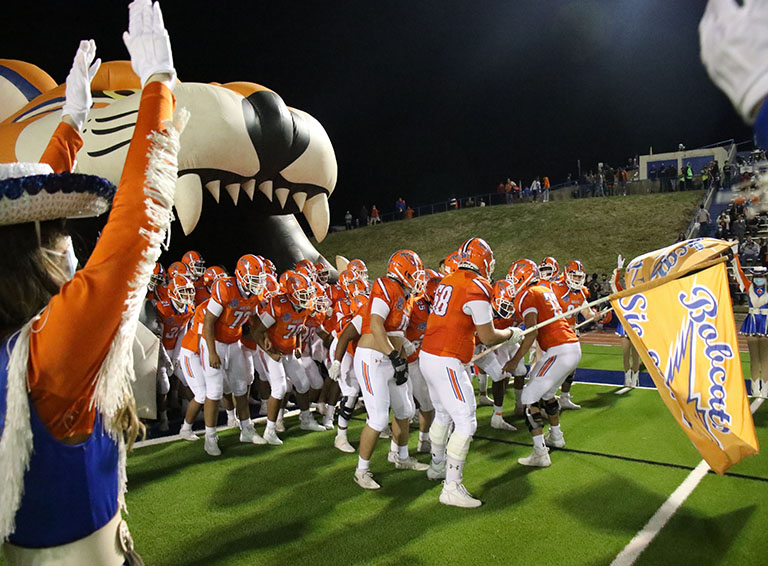 The Little Southwest Conference Cats (3-3 overall, 3-1 district) next tour stop is on Friday, November 6. Central plays the Midland Bulldogs (1-5 overall, 1-1 in district). Kick-off from Grande Stadium, in Midland, is set for 7 p.m.