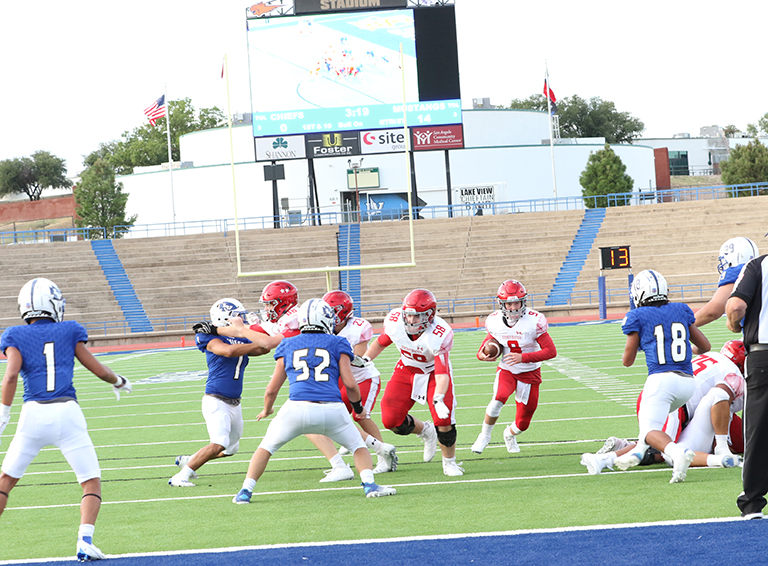 SAN ANGELO – In Friday’s non-district game between the Lake View Chiefs (2-0) vs Sweetwater Mustangs (0-1), Lake View was not able to weather a “Perfect Storm.” A perfect storm is described as a convergence of weather conditions as being "perfect" for the formation of such a storm. In this case, it turned out to be quarterback, Leo Holsey who led his Mustangs’ high potent offense to quick lighting scores on five of their six possessions in the first half. Holsey’s four passing touchdowns and three touchdown runs, earned a hard-fought double-digit, 58-42 win as he out-dueled his counterpart, Chiefs’ quarterback, Albert Rodriguez. 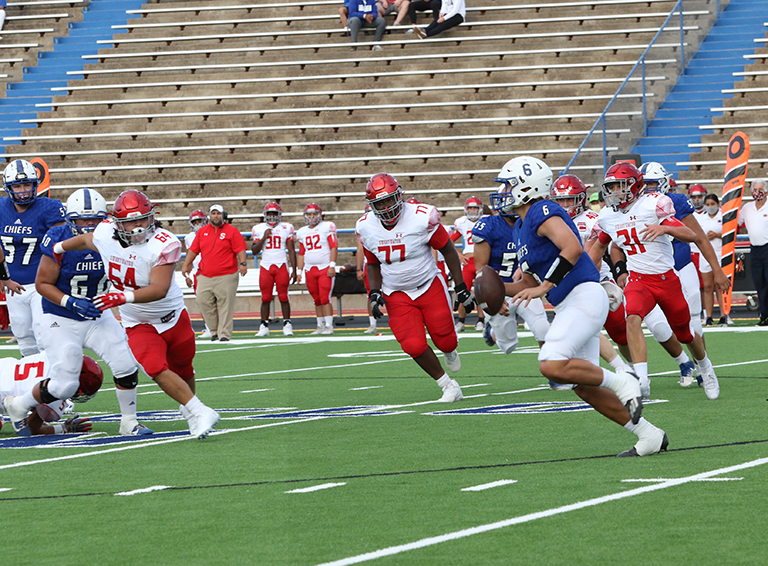 Interestingly, the difference between a fast start and efficiency was connected to one’s success, (Holsey) compared to the other quarterback (Rodriguez) whose offense started out slow. Albert’s misfired passes to his receivers at critical times was the difference in the game. A big contributor to the Chiefs’ quarterback woes was also a tenacious Sweetwater defense which kept Lake View’s high scoring, offensive air attack from going off. Rodriguez oftentimes found himself scrambling out of the pocket under constant pressure. 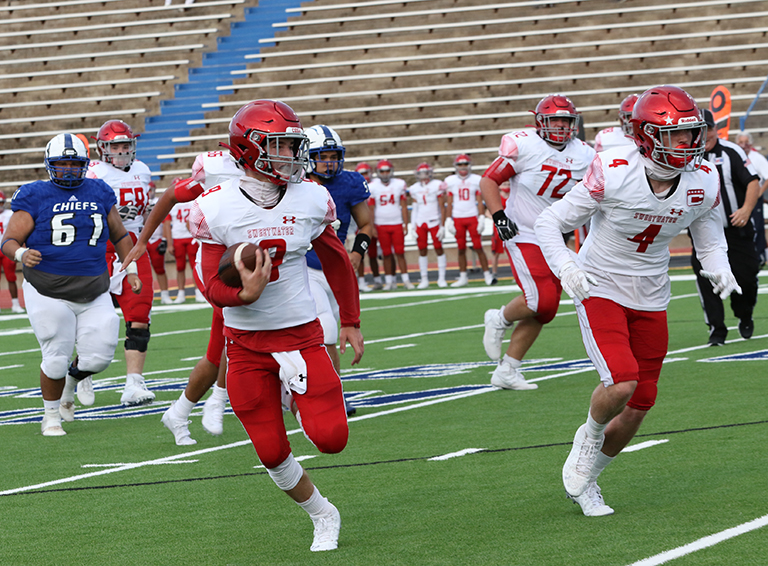 While both gunslinger quarterbacks lit up the scoreboard for a combined 100 fantasy points, it was Holsey’s duel passing and running on Lake View’s “Pride of the Northside” defense that kept the chains moving forward, particularly early in the first half. For the game, the Mustang quarterback had four touchdown passes and ran for three. He completed 12 of 21 passes for 220 yards, along with nearly 100 yards rushing.

As for that fast track start, Sweetwater’s offense flooded Lake View’s defense with 22 points in the first quarter. Holsey led the deluge of early points as he led Sweetwater on its first possession score, a 10-yard touchdown pass to a receiver, Darian Carr. The PAT failed, but the Mustangs were up 6-0.

Chiefs’ Rodriguez held his own as he completed half of his passes, for 360 plus yards and three touchdowns. With Sweetwater ahead 34-14 and just 30 seconds left before the half, Rodriguez had an opportunity to get points on the board as Lake View was in scoring range; once the quarterback fumbled the ball, the Chiefs lost momentum, thus played from behind the rest of the game. 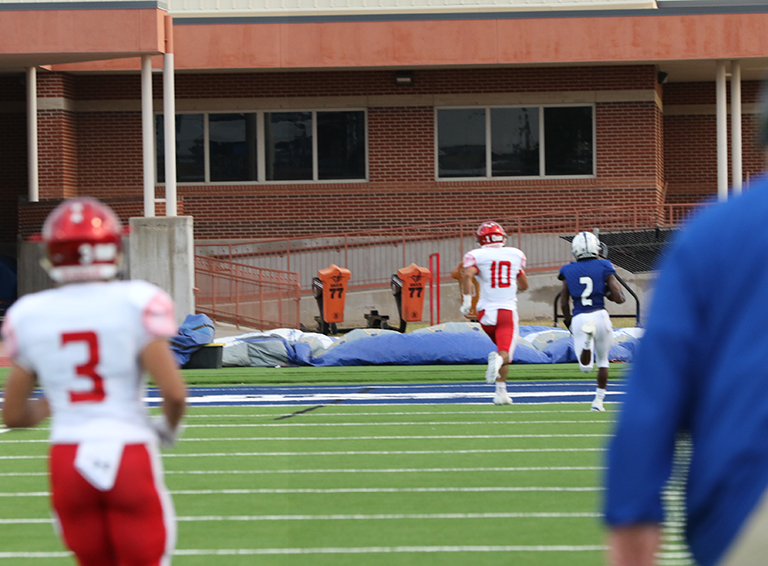 There were some highlight catches as Rodriguez went to Austin Bandy five times in the game; one spectacular play was a 66-yard catch and run with 3:00 left in the second quarter to make it Sweetwater 34, Lake View 14. Bandy made numerous spectacular catches throughout the game to keep Lake View within striking distance. But it went for naught. For the game, Austin snagged five passes for 116 yards.

Not only was the Chiefs’ homecoming night ruined; the team experienced its first loss of the season. Up next for Lake View (2-1) is a road trip to Snyder, Texas to play the Tigers on Friday, September 18. Snyder (1-2) won big against Lamesa, 40-8. Kick-off from Tiger Stadium is scheduled for 7 p.m. 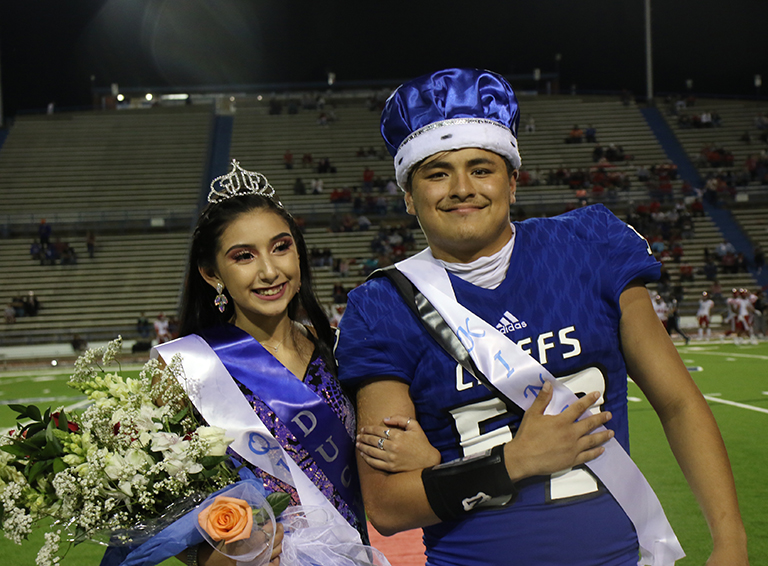 The Lake View Chiefs crowned a new 2020 king and queen during Friday night's homecoming game festivities held at San Angelo Stadium. The king was announced first, which turned out to be Mr. John Mendez. As for LV's queen, it was Martha "Tita" Rivera. 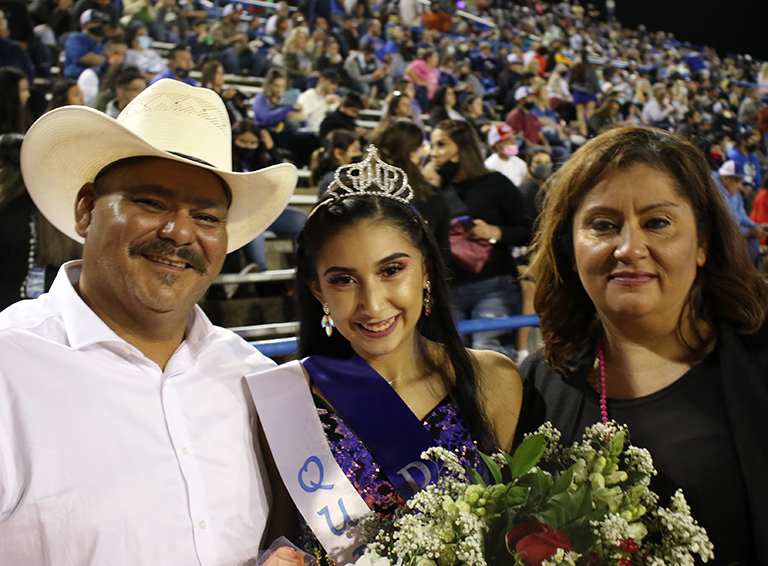 "Tita" is the daughter of Linda Rivera and the stepdaughter of Danny Ramirez.