Timberwolves cash in on Cats' misfortunes for 41-35 OT win 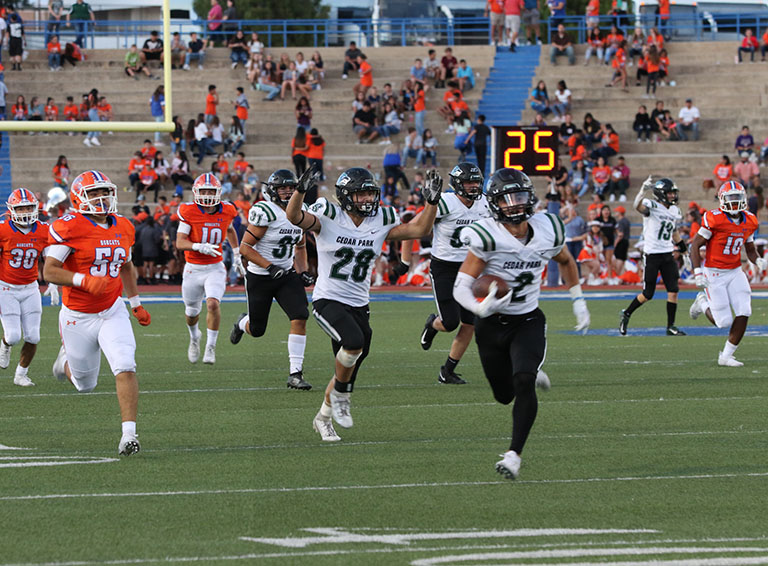 SAN ANGELO – Friday the 13th is considered an unlucky day. For the San Angelo Central High Bobcats make that a night of misfortune and one major, missed opportunity as Coach Brent Davis’ young football team’s inexperience showed up at the wrong time. It was a tale of two halves in Friday the 13th’s “fright night.” The Bobcats were within striking distance in their non-district game as the Cedar Park Timberwolves led the Bobcats 21-14 at the half. 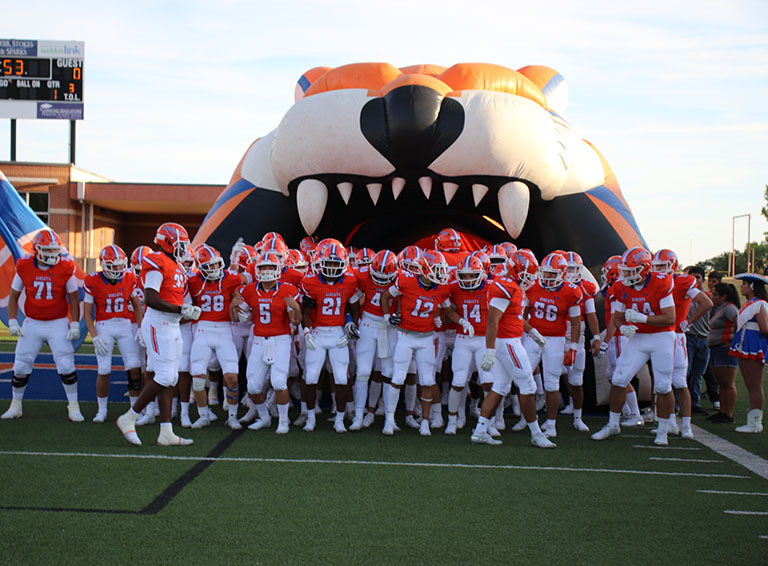 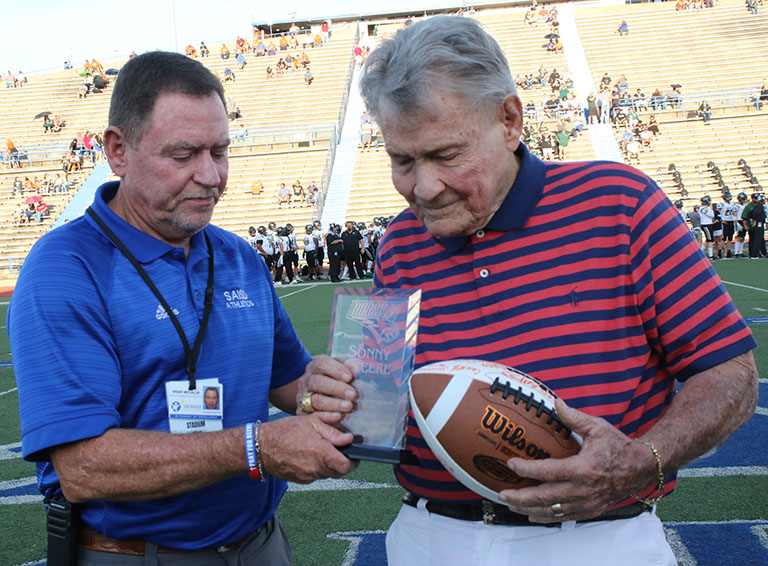 Prior to the Cats vs Timberwolves non-district game, the San Angelo Independent School District recognized
Mr. Sonny Cleere for his contribution and dedication to San Angelo Central Bobcat football as the “Voice of the Bobcats." Mr. Cleere was in the broadcast booth as the public address announcer for 47 years. Succeeding him for the 2019 football season is KGKL's radio announcer, John Flint. Flint stated that though he will be succeeding Mr. Cleere as the PA, he will never be able to fill his shoes. The broadcast booth belonged to Cleere and always will. Thank you Mr. Cleere for giving us your golden voice in public service to the community, SAISD and all Central High football fans!

After the ‘Cats couldn’t do anything with their first series, Cedar Park marshalled downfield and scored when quarterback, Ryder Hernandez threw a pass to Gunnar Abseck who came across the middle and was wide open for an easy catch and short run to the end zone. The Timberwolves led 7,0 with 10 minutes left in the first quarter. 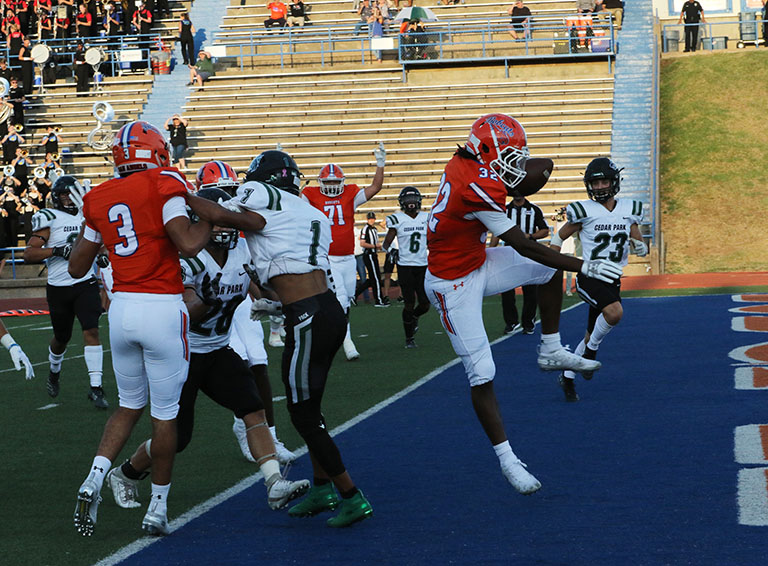 Central responded with their drive on the second series. On second down and six, Malachi Brown threw a swing pass to back, Kris Jackson, who scooted in for the touchdown. After the PAT, the game was tied 7-7 with 5:01 left in the first quarter. 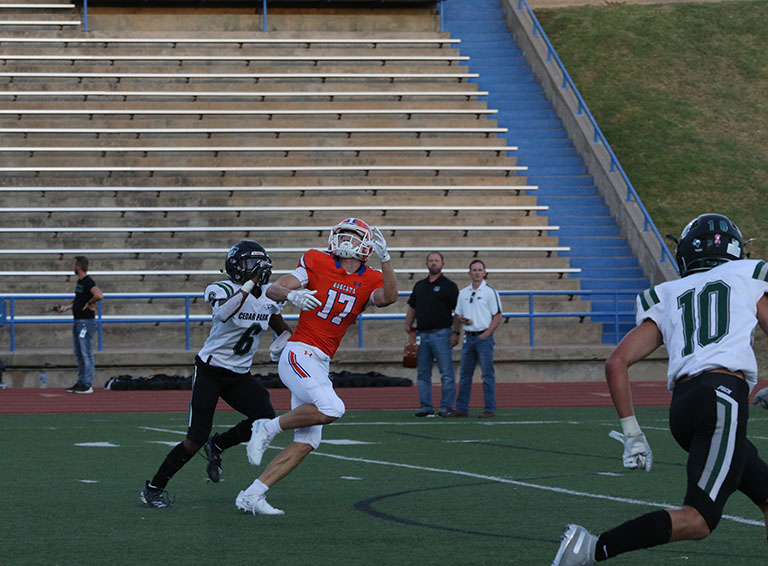 On the Bobcats second possession, the offense marshalled right down the field again for its second consecutive score. This touchdown was a thing of beauty as Brown found wideout, Tanner Dabbert who got behind the defensive back, caught the ball over his left shoulder to score on a 34-yard, catch and run. Central led for the first time, 14-7.

With Central scoring on consecutive drives, Cedar Park returned the favor as Johnathan Stockwell scores from 13 yards out to tie the game at 14-14. On the Timberwolves second consecutive scoring drive, receiver, Josh Cameron catches a pass from Hernandez for a 22-yard touchdown to take the lead, 21-14 which is eventually what the halftime score is.

The second half becomes the Wild Wild West show as the Bobcats score on three consecutive drives to take what seems a comfortable lead, 35-21. But then the Bobcats’ defensive wheels come off down the stretch. The first time the Angry Orange shows signs of fatigue is when Timberwolves’ Hernandez gets a touchdown with 51 seconds left in the game to cut the lead, 35-28. On the proceeding kick-off everything goes “south” on Central’s special “all hands” team. The Bobcats get an unlucky break as the ball doesn't bounce their way. Cedar Park recovers an onside kick at midfield that led to a touchdown with PAT to tie the game, 35-35 to send the game into overtime.

The Timberwolves didn’t need luck or a full harvest moon to catch a break. Cedar Park cashes in on Central's misfortunes once the Bobcats' Brown fumbles the ball on their first shot in overtime. Just as Brown had been the star of the game with his late heroic, 39-yard backbreaking touchdown drive to almost seal the game, 35-21, this time it’s Timberwolves’ quarterback, Hernandez turn. He connects with Cameron to get Cedar Park in scoring range for its winning touchdown. On the next play, the quarterback hands off to Brock Johnson who scores from nine yards out to snatch victory away from the Cats.

Central’s next game is Friday, September 20 on the road to close the non-district season in El Paso against the Pebble Hills Spartans.