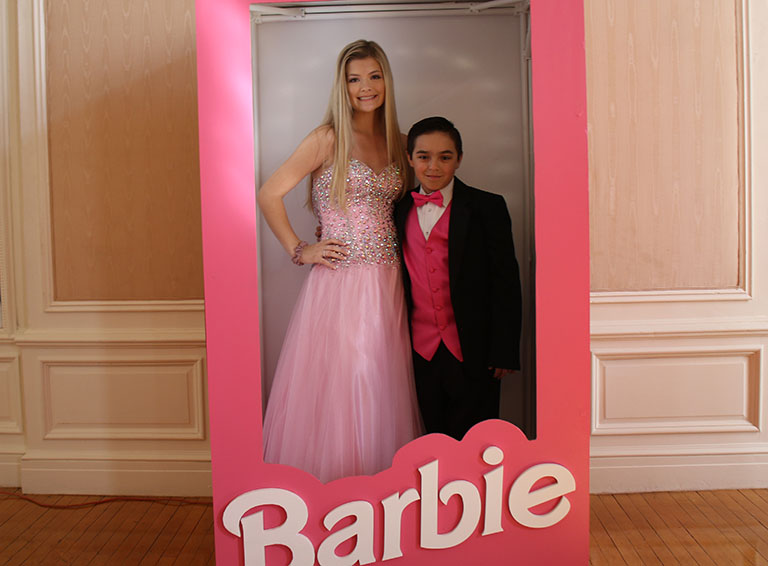 SAN ANGELO – On March 9, 1959, the iconic, celebrity Barbie doll was birthed by her Mattel makers, Ruth & Elliott Handler. As Barbie celebrated her 60th birthday, two weeks ago, the Junior League of San Angelo, a 73-year-old nonprofit organization, got its' idea to use the fashionista, Barbie three years ago. 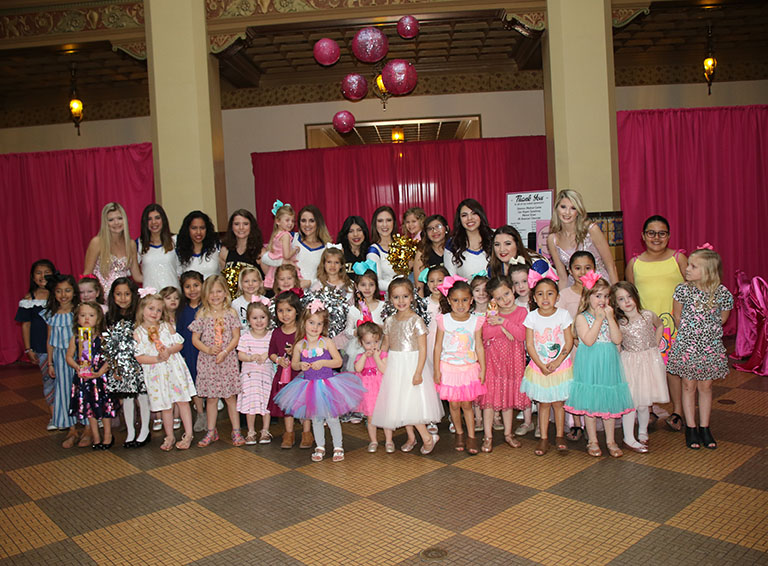 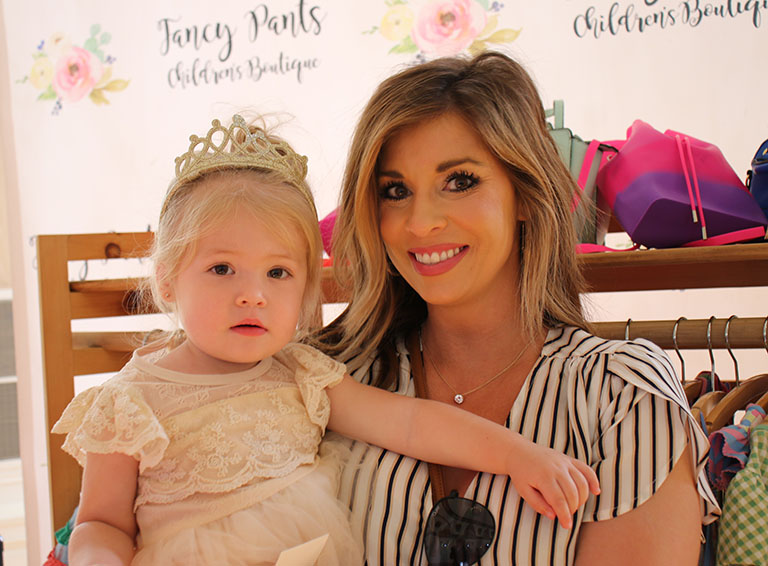 The 3rd consecutive annual, Barbie Dance party was held over the weekend, Saturday, March 23 at the Cactus Hotel. Making appearances for this ever-growing popular mother-daughter, “bonding” event was Madison Storey and Mirian Wagnon, who came “dolled” up as two young versions of Barbie. 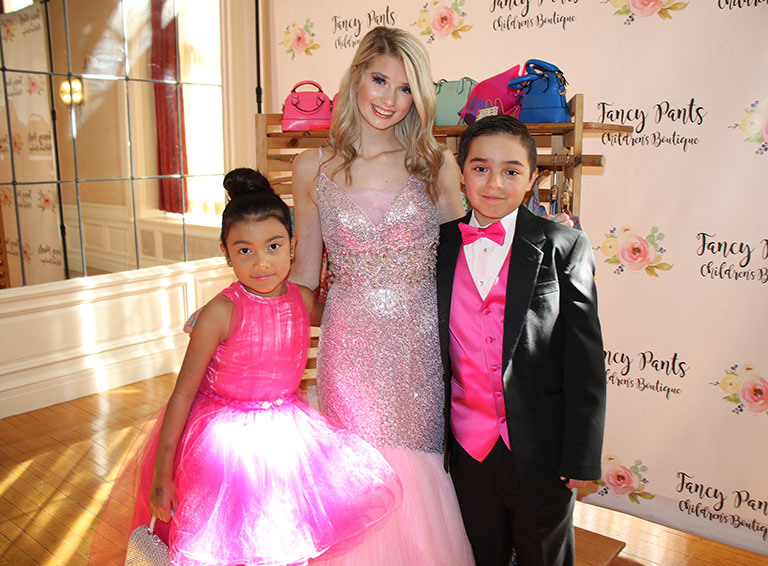 Left-to-right: Meila Mendoza, Miriam Wagnon and Drew Dotson. Meila is nine-years-old and attends Crockett Elementary School while Drew is 11. He is in the fifth grade and goes to Santa Rita. 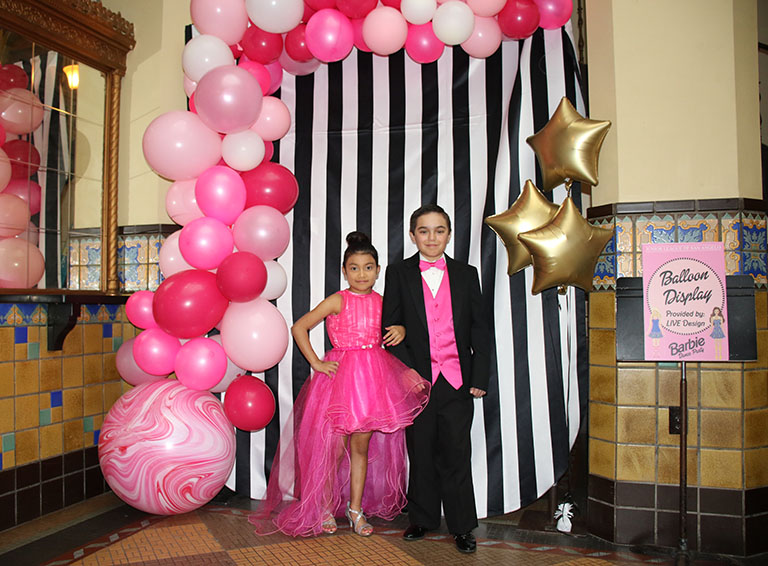 And would you believe it, a Mattel young version of Barbie’s gender opposite, a handsome, Ken, was spotted in the house. Ken's look-a-like turned out to be 11-year-old, Drew Dotson. Drew, whose mother is Tina, is a fifth grader who attends Santa Rita Elementary. Before the two-hour glitz-and-glam little girls event concluded, a spot-on look-a-like older, “Brainiac and beautiful, Barbie who showed up dressed casually was identified as Mrs. Leslyn McManus, who resides in Wall, Texas. 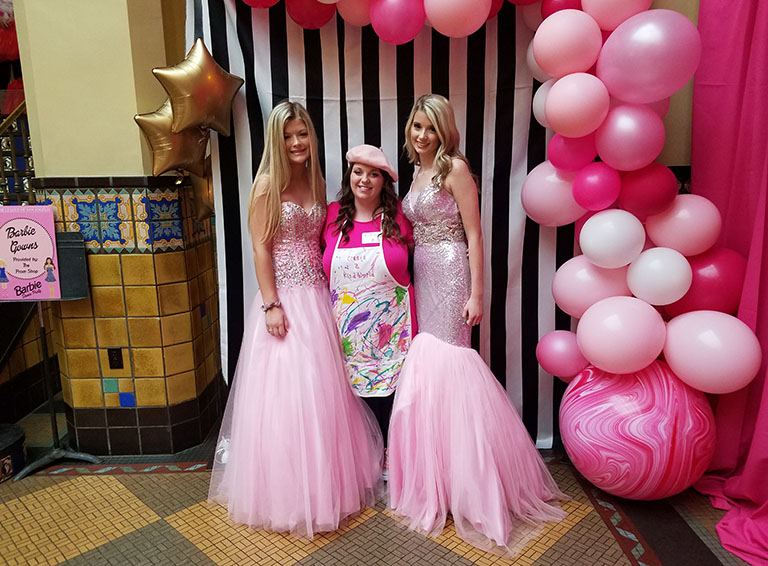 Kallie Quanz, a member of JLSA and Co-Chair for the Barbie Dance Party, stated this year’s theme was “In A World where you can be anything, “Be Kind” With Barbie being a positive role model for the past 60 years of her existence to girls everywhere, it made sense to select her as the nonprofit’s mission is all about empowering women and children to be “’Be anything.” 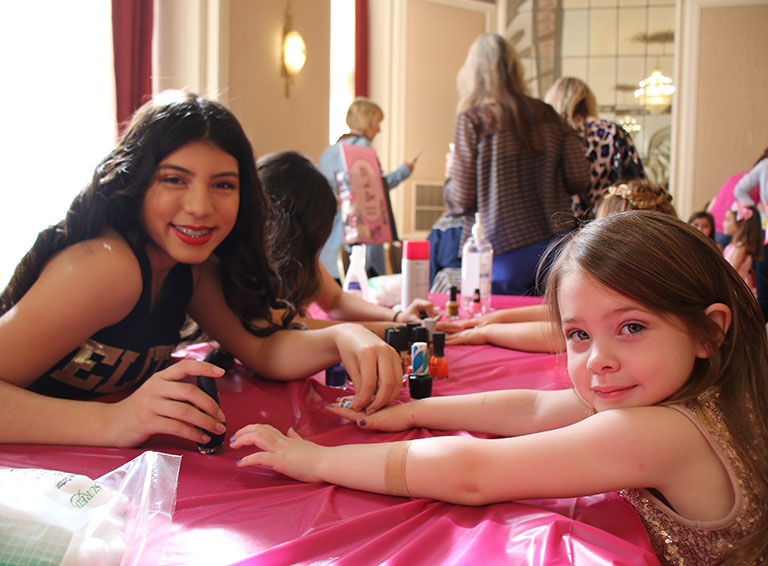 Celeste Clayson is a member of Miah Wagnon's Elite Prep Academy. The other two members there were: Jessill Suarez and Chloe Lopez.

Saturday’s first of two scheduled events began at 10 a.m. with 12 “glitz-and-glam” stations for girls, ages three to 12-years-old to participate in such activities focusing on self-esteem, art, science, math, culinary arts, reading and dance” stated Quanz. With math and science incorporated into the mixed activities, Flaco Guapo stated, “it says a lot about Barbie not just being a beauty but also a Brainiac.” “Barbie does have brains; and we do have a “Be kind to your mind” station, Kallie said. Among the dozen “glitz and glam” booths were “Be Kind” environment, “Be Kind” health, “be kind to your smile” dentist booth, etc. 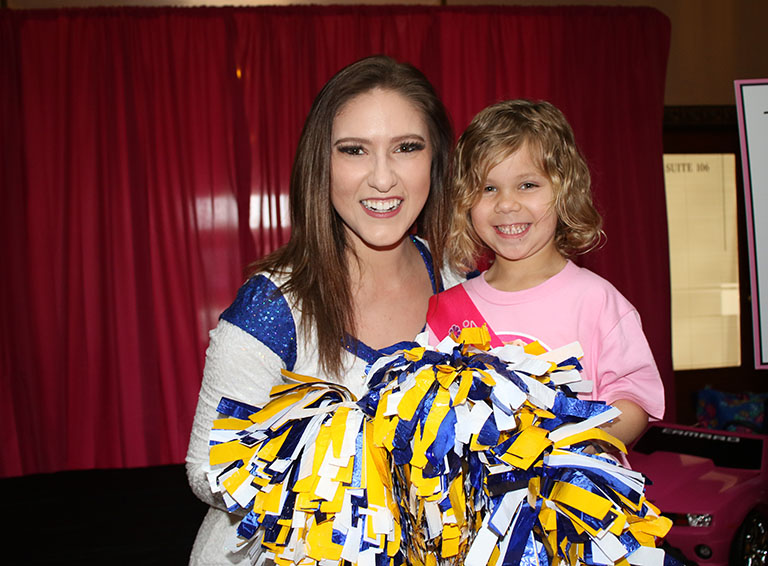 150 parents registered for both the 10 a.m. and second 2 p.m. Barbie event. One mother, Laura Maxwell, stated this was this first time for her and five-year-old, daughter, Collins, who was excited to be there. “Collins is just now starting to really love Barbie’s.” So how much does Collins really love Barbie’s? “Collins has them all over the house” said Laura. 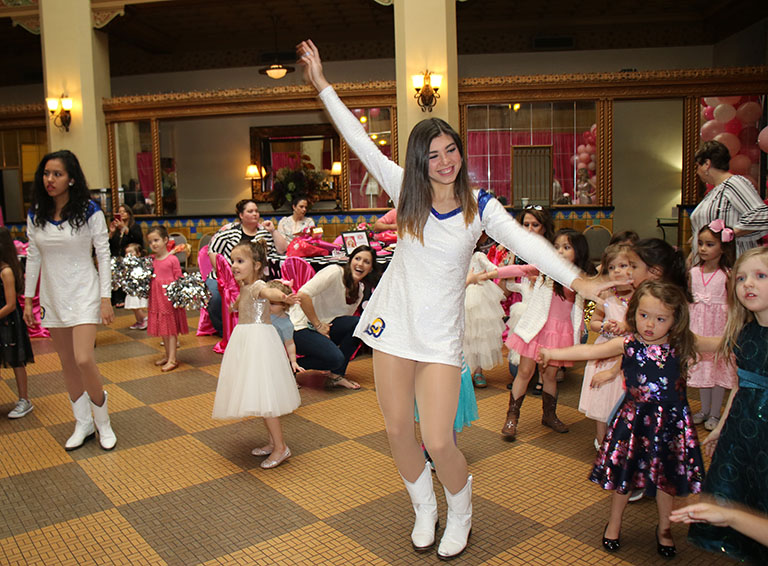 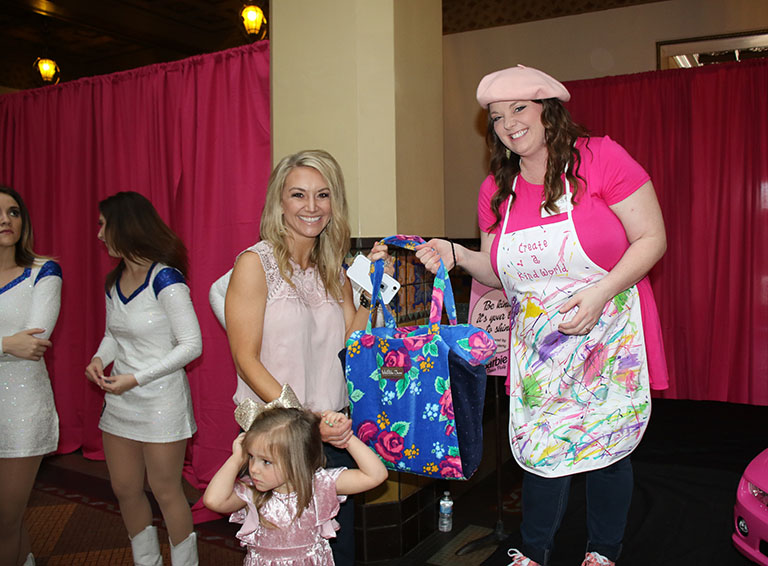 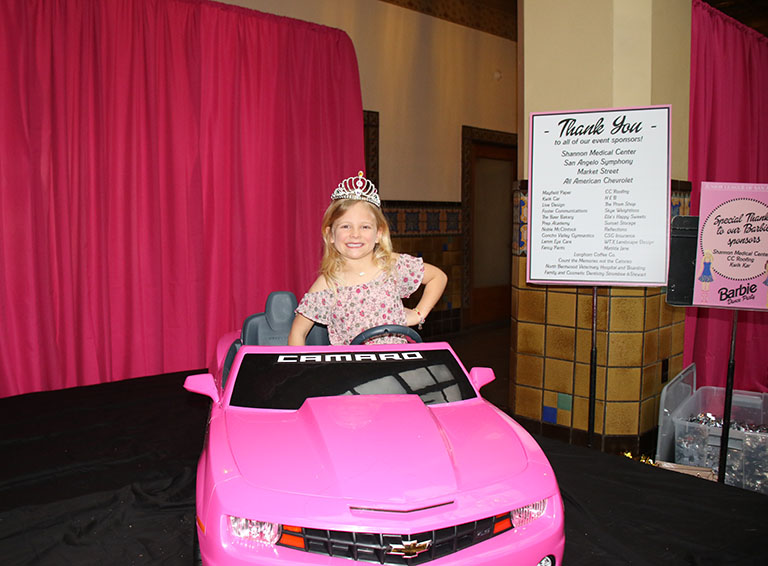 Blake Waltz was the winner of this pink, motorized kids' Camaro at the first Barbie Dance Party session from 10 a.m. to 12 noon. 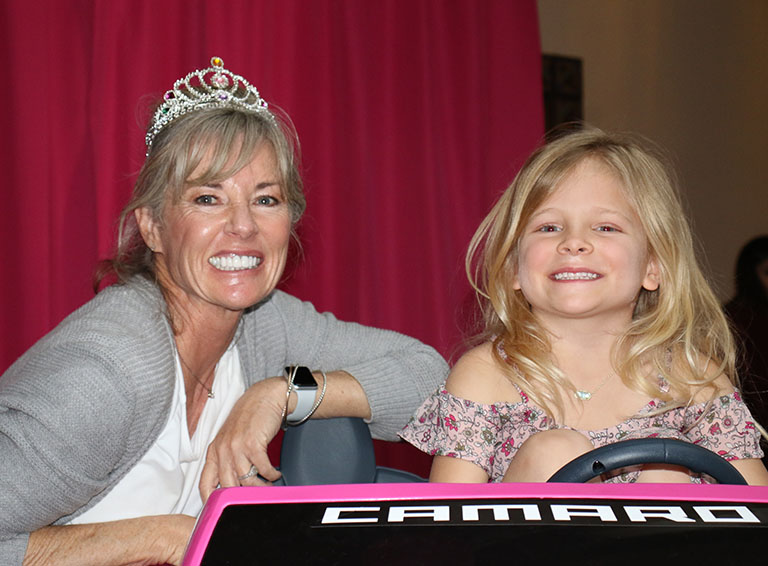 Mrs. Leslyn McManus, is the gorgeous Barbie look-a-like who accompanied her five-year-old granddaughter, Blake Waltz. Both reside in Wall, Texas. Congrats from Flaco Guapo Media to Blake on her winning the shiny, Camaro!

The BDP concluded with the first prize awarded to a mother who received a gift bag that included a bath towel, gift card and a bottle of wine. The bigger prize, a motorized kids’ Camaro, was won by five-year-old, Blake Waltz whose grandmother, wait for it. Yep you, guessed correctly, it was her gorgeous, Barbie look-a-like, Leslyn Mcnanus.