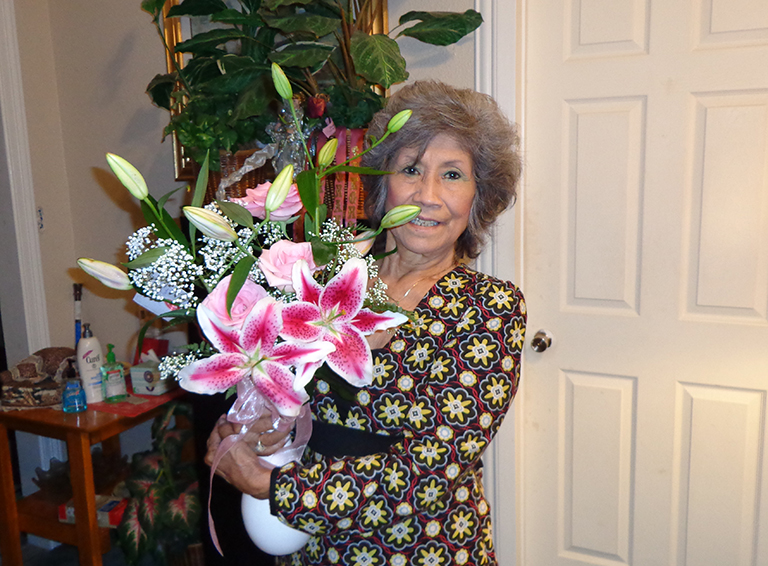 SAN ANGELO – “Everyone who has a beloved parent, aunt, uncle, grandparents, or guardian who reared you. tell them you love them every day and visit them as many times as possible. Also, kiss them, hug them, take care of them, get them what they like to eat, buy them gifts on their birthdays, Father’s Day, Mother’s Day, etc. Because when your loved one passes away all that you did or said will never, ever be enough.”

NOTE: Today, July 19th, 2020 shortly after 4 p.m. marked the two-year anniversary of our beloved mom, Ermelinda Camarillo Sanchez’ passing from this life into eternity to be with her Lord and Savior, Jesus. The following is my attempt to give tribute to my virtuous mother—a woman of strength, honor, courage, who walked in love and forgiveness” 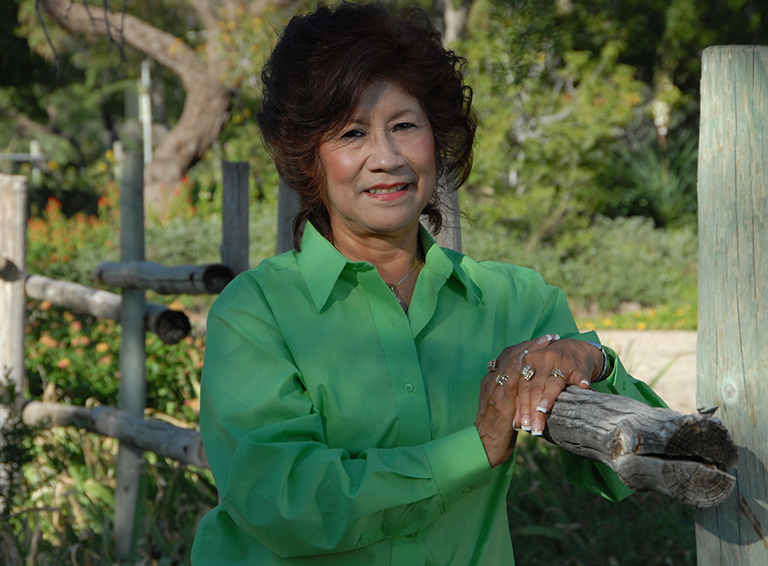 On Thursday, July 19, 2018, at approximately 4 p.m., our beloved Mother, Ermelinda Camarillo, Sánchez, passed away in her home, surrounded by her children, grandchildren, and great-grandchildren. Mom was not only the matriarch of her family but the spiritual mooring who loved us, prayed for us, encouraged us. And yes, as an anointed woman of God, a pastor and a minister even rebuked us at times. In October 2002, the Lord spoke to me that my Mom would be my pastor from then until her passing. Before Mom accepted the calling to become a pastor, she and her husband, Jimmy Sánchez, Sr. had four children: I, Jimmy Sánchez, Jr. her eldest son, followed by a daughter, Rose Sánchez-Samarripa, daughter, Nora L. Sánchez-Samarripa; and her youngest son, Jesse Sánchez. Dad preceded her in death on February 10, 1999. Rose passed away on March 10, 2012.

Since mom’s passing, I ‘ve had time to reflect back on my time spent with her; particularly the last two-and-half-years of her life. In February 2016, Mom broke her hip; after recovery time and surgery, I became her full-time caregiver until she passed away. During that period, I was working full-time for a bilingual newspaper as its editor/ reporter. After it became apparent that Mom was not going to be able to get back to her normal life, it really became difficult to care for her and do my job at the newspaper simultaneously.

I will be as transparent as I can be. Honestly, I oftentimes failed in caring for my mom. I was overwhelmed with responsibilities as editor/ reporter of two newspapers and the online digital websites. And yes, I regret that I took out my frustrations on her. It was not her fault. Mom who really did walk in unconditional love and forgiveness understood [she didn’t allow me to get away with it but did understand.] Mom always encouraged me to go the Lord and ask that His “grace is sufficient” to handle my workload and care for her. The other thing I got from her godly role model example was to ask forgiveness when I blew it with her. And to forgive me. I also want to interject here that yes there were relatives who would see me at times be ugly to my mother. But they were never around when I would ask forgiveness from her behind closed doors. I do have regrets. One is my mistreatment of her. The second one is that I should have quit my job sooner to take care of her on a full-time basis. 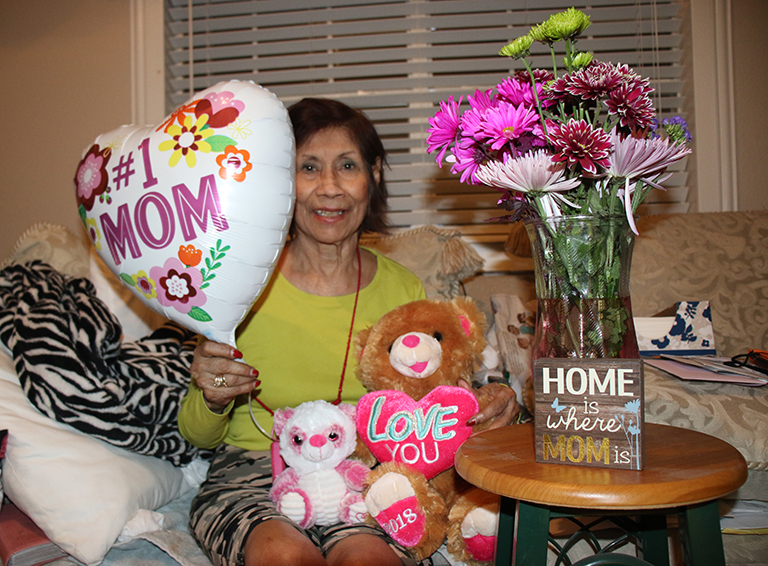 Toward the end of her life, I asked the Lord for two things. First, I did not want her to ever be placed in a nursing home. And second, when the time came for her to pass away, that her family would be there. The Lord was gracious to answer my requests, regardless of how I stumbled in areas with her. I was able to some degree close the chapter in my life with issues dealing with the mother-son relationship which went back to my childhood. I was the first-born whom she babied. Then later as an adult, [from my perspective] I believe she was harder on me than my other siblings. That resulted in growing up with resentment and a rebellious attitude toward her. My dad wasn’t able to be the disciplinarian as he was on the road a lot due to being in the construction business. After dealing with these deep core issues from both of them. I realized I also resented my dad because he didn’t discipline so I took out on his wife, my mother. However, I want to be crystal clear. After receiving healing and forgiveness years later, I dearly loved both of my parents and considered them my heroes. While at Angelo State University as a non-traditional student, I wrote a story on them, titled: “Where Have All the Heroes Gone?”

I did get some kind of closure with mom. Just as she was there for me all those years since my divorce in 1991, I was there for her until her passing. I vividly remember that my brother, Jesse, said something that profoundly changed my life with her. “Don’t tell me you love me.” “Show me!” That’s what I did, not just with words, but with my actions toward her.
I still think about my mom often and will always miss her. I feel like an orphan without her strength and someone to lean on. But I remember she said something before dad passed away. She was going to miss him but would “soldier on in the faith.”

As I close this final chapter on my beloved mom, best friend, and mentor, it was not until March 2019 that it dawned on me—I was to carry on her legacy, her mantle, and follow in her footsteps in ministry. The Lord spoke to me to take care of her family—the Sanchez, Samarripa, (other Samaripa family. Father God clearly said take care of her family not my family [Sanchez children.]
I have tried my best, though have failed as a human being. I believe mom would have wanted me to soldier-on-in-the-faith, represent her—honor her memory, life, and legacy. 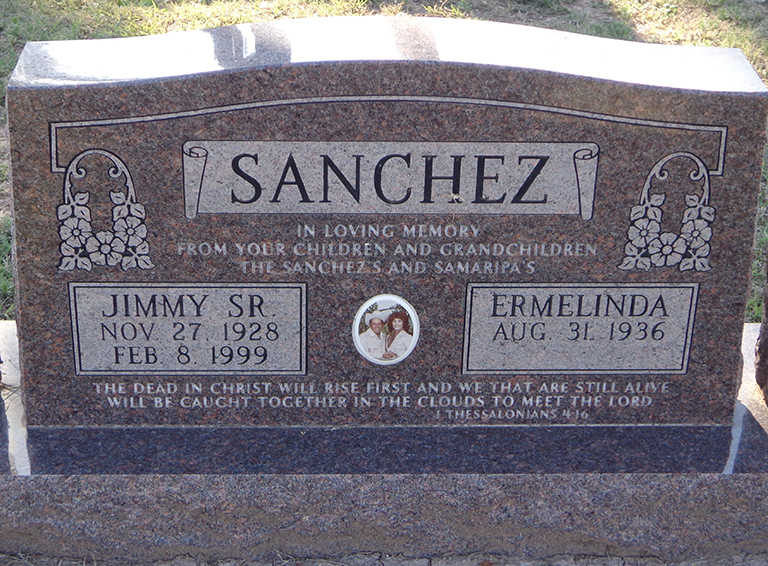 In closing, we will never forget you, mom. As long as I live, I will carry on your legacy of Jesus’ two spiritual attributes modeled in your earthen vessel: love and forgiveness.

“Greater love hath no man than this, that a man lay down his life for his friends.” (John 15:13, KJV).
“There are two special gifts we can give our children; one is roots, the other is wings.” Author unknown.